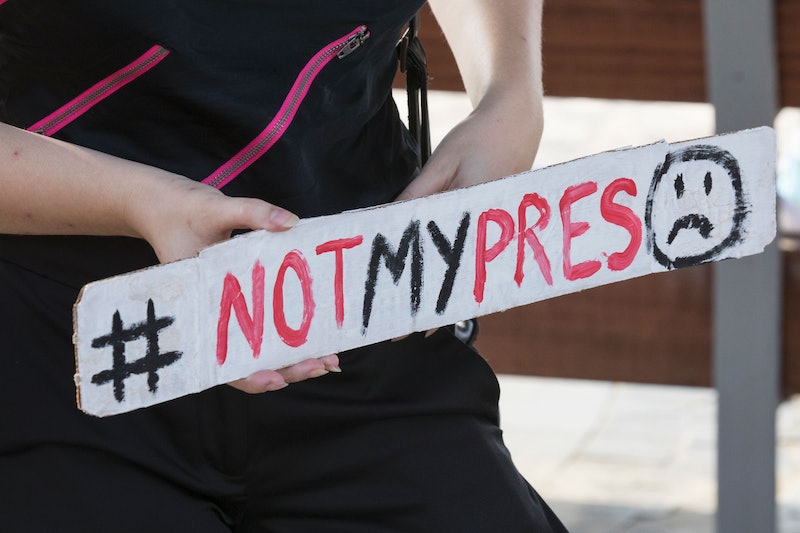 As rashes of protests break out across the nation, and ballots continue to be counted for popular-vote winner Hillary Clinton, it is becoming more and more clear that Donald Trump's administration will face enormous public and political backlash over the next four years. If you're energized for the long road ahead, but feel like you need a little guidance and inspiration, I have a shortlist of 12 books to read before you fight this presidency.

Fighting Trump's presidency doesn't necessarily mean taking to the streets with signs and shouts, but it does mean calling your Congress members, vocally boycotting regressive companies, taking a stand against the infringement of others' rights, and supporting organizations that do socially minded work. Yes, all of this activism may get discouraging, but remember: it does not make us less complicit to disagree with evil things being done to others if we do nothing to stop them.

The list below features 12 essential books to read before you fight this presidency. This is not even close to being exhaustive. As always, please share your own recommendations with me on Twitter.

We have only a few weeks to prepare before Donald Trump takes office. It's OK if you don't read all of these books before Jan. 20, because, unfortunately, we can count on several years of anti-woman, anti-immigrant, anti-Earth, anti-science, anti-LGBTQIA, and anti-POC legislation and enforcement to follow Trump's inauguration. So start reading, and don't stop.

1. The Handmaid's Tale by Margaret Atwood

Published in 1985, Margaret Atwood's The Handmaid's Tale paints a grim picture of the U.S. following a hostile takeover by the Religious Right. It centers on a nameless woman who finds herself completely disenfranchised, stripped even of her name. With her family deemed illegitimate and torn apart, Atwood's narrator lives in the brave new world of Gilead as a state-sanctioned broodmare, whose purpose is to bear children for an older, sterile couple.

The U.S. has the highest number of incarcerated people per capita: 724 per 100,000. People of color make up 30 percent of the U.S. population, but 60 percent of inmates are non-white, and "one in three black men can expect to go to prison in their lifetime."

In The New Jim Crow, Michelle Alexander examines how stringent anti-drug laws disproportionately target people of color and turn "the U.S. criminal justice system [into] a contemporary system of racial control," in spite of its professed colorblindness.

The first Earthseed book, The Parable of the Sower, centers on hyperempath Lauren Olamina, who is forced out of her secure community and must travel the blighted landscape in search of a safe place for her followers. In the second installment, The Parable of the Talents, Senator Andrew Steele Jarret's 2032 presidential campaign inspires his supporters to beat "cultists" and witches — A.K.A. anyone who doesn't subscribe to their brand of Christianity — and burn them at the stake. Jarret has an all-too-familiar call to action for his listeners: "Join us! Our doors are open to every nationality, every race! Leave your sinful past behind, and become one of us. Make America great again!"

I really can't make this stuff up.

If the last few years have taught us anything, it's that prejudiced politicians, writers, and speakers can use coded language to say what they mean while maintaining a degree of plausible deniability: e.g., "All I said was 'welfare queens,' it's not my fault that you brought race into it." This dog whistling isn't new, however. In fact, it's been going on for a lot longer than many of us have been aware.

In Dog Whistle Politics, Ian Haney López offers up a history of dog-whistle strategies in U.S. politics, and how those tactics have worked to gain and maintain support by exploiting the prejudices of the populace.

National Anthem protests dominated news coverage this year, and prompted arguments about whether or not refusing to stand for the song was akin to slapping veterans and active-duty military personnel in the face. Similar debates cropped up over the morality of flag-burning, in spite of the fact that the Supreme Court has upheld citizens' right to desecrate the stars and stripes.

The events of Ben Fountain's 2012 novel, Billy Lynn's Long Halftime Walk, transpire over one day. Lynn is part of a veteran squad that has been invited to take part in the Dallas Cowboys' halftime show, but his two-week tour of the U.S. reveals that the Iraq War represents something entirely different to civilians at home than it does to the men and women serving overseas.

6. Strangers in Their Own Land by Arlie Hochschild Russell

The 2016 presidential election and its results have left most of us wondering how well we really know and can understand our neighbors, friends, colleagues, and family members.

In Strangers in Their Own Land, sociologist Arlie Hochschild Russell explores the inner-workings of red-state America. Her subjects are the residents of small-town Louisiana, who voice staunch "opposition to federal help," despite being the very "people and places that need it" — a phenomenon she labels the "Great Paradox." Among her cast of characters are an environmentalist who supports gutting the EPA, a pair of cancer patients who live in a polluted bayou and vote for politicians based on their opposition to abortion, and a man who has lost his neighborhood to a drilling accident but opposes government regulation of oil industry.

7. "The Arctic Lizard" by Etgar Keret

In his new short story, "The Arctic Lizard," The Seven Good Years author Etgar Keret imagines life for American teens during Trump's third term as POTUS. The unnamed protagonist, is enticed to join Unit 14+ — a teenage military division — after seeing advertisements depicting "Destromon Go" battlers that are only available to those who serve in overseas action.

8. Transgender 101: A Simple Guide to a Complex Issue by Nicholas M. Teich

In 2016, more than 175 anti-LGBTQIA bills were introduced, at least 44 of which targeted the transgender community. This swath of legislation, and support for the lawmakers who write and promote it, shows how deeply entrenched transphobia and ignorance of trans issues are in U.S. culture.

Enter Transgender 101. Written by Nicholas M. Teich, an educator who is trans himself, this little book is a fantastic primer for anyone who wants to be a better ally and advocate for their trans family, friends, neighbors, and co-workers.

After an election cycle that has sparked discussions over the First Amendment rights of journalists, the role of social media as a news-gathering tool, how to stop fake news from circulating, and the use of the Internet to suppress voter turnout, a book that's literally about all of those things is probably the last item on your TBR. But Fahrenheit 451 is more important now than ever, and, if you're planning to protest this presidency, it's downright essential.

In White Trash, historian Nancy Isenberg asserts that the marginalization of poor whites is the dirty little secret threaded through all of U.S. history. She "examin[es] the white rural outcasts whom politicians ... have sought to rally, but who otherwise have remained vilified, shunned, targeted and kept apart [sic]" from people in higher income brackets, and how the stigma associated with white poverty has created cultural identities within and stereotypes without.

11. The Grapes of Wrath by John Steinbeck

How often do I hear stories about how immigrants are stealing U.S. citizens' jobs, how willfully unclean any outsiders are, and how the poor could be rich — or at least middle-class — if only they were willing to work for it? Too damn often. Somewhat unexpectedly, the book that puts all of these myths to rest was published almost 80 years ago, in 1939.

John Steinbeck's The Grapes of Wrath follows the Joads, a tight-knit family of sharecroppers, who, after being displaced by the Dust Bowl and the Great Depression, pack up most of their belongings on top of their automobile and journey west out of Oklahoma toward California. Enticed to the Pacific coast by promises of jobs and food a-plenty, the family encounters class-based prejudices from nearly everyone they meet, including people who are on the verge of plummeting right into the Joads' circumstances.

12. How the Pro-Choice Movement Saved America by Cristina Page

Over the last two decades, conservative politicians have continually assailed women's rights and autonomy by weakening Roe v. Wade and limiting access to birth control and well-woman care. Today, the GOP are poised to take control of both houses of Congress and the White House, and they have already begun to threaten Roe and the Affordable Care Act.

Published in 2006, Cristina Page's How the Pro-Choice Movement Saved America outlines how supposedly pro-life policies actually increase the demand for abortion, and are intended to further a different goal entirely: controlling sexuality. Although it has been recently decried as "outdated" in the age of the ACA, Page's book might soon become more timely than any of us want it to be.