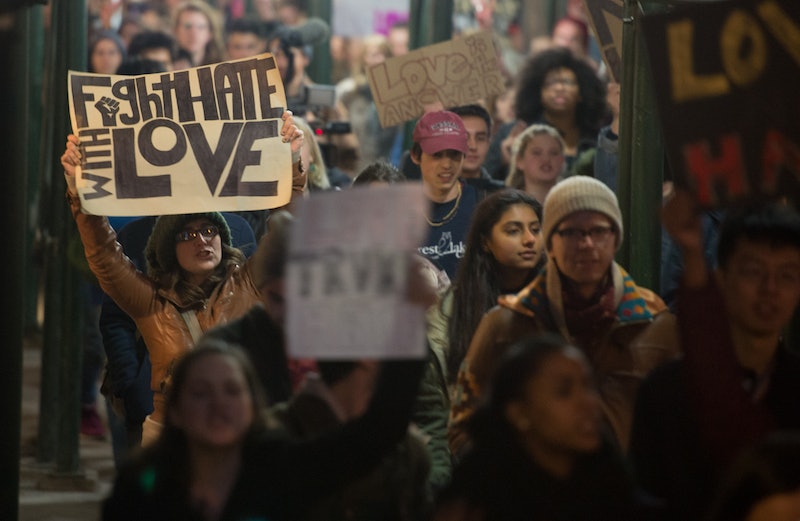 As a woman, I was more than saddened by the results of the 2016 election — I was scared. Quite simply, I fear for what this election means for women's rights. By electing a president who has openly bragged about sexually assaulting women, many women think we as a country have sent a message that women don't matter. I don't want to believe that's true — actually, I refuse to believe it. Women, and other marginalized groups: We matter. So here's how women can show our country just that, even when it's telling us we don't.

1. Donate Or Volunteer For Planned Parenthood

Even though Obama is moving to permanently fund Planned Parenthood, many people are concerned for the future of this organization that so many women across the country depend on. That's where you can come in. Donate what you can to Planned Parenthood to help keep its doors open. If you're looking for a more hands-on way to help, you can volunteer for the organization as well.

2. Participate In Or Volunteer For The Million Women March

The Million Women March will be a demonstration that aims to bring women and feminists to Washington, D.C. to show solidarity and disapproval of the president-elect. It's being planned for Jan. 21, 2017 — the day after Donald Trump is set to be sworn in as the president of the United States. You can join in the protest to show the country that women, LGBTQ people, Muslims, and people of color matter. You can also take your activism a step further and help organize or volunteer for the march. Check out this Google doc for more information on getting involved organizing the Million Women March.

3. Escort People In Your Community

Unfortunately, Donald Trump being elected has emboldened bigots to act on their hatred, and there have been acts of violence against POCs, LGBTQ people, and Muslims in the days following the election. In response, Kayla Santusuosso from the Arab Association of New York set up a Google form where New Yorkers can volunteer to escort their neighbors on their commute to help them feel safe. For those of us who pledged to stand by our LGBTQ, Muslim, and POC friends, here's your chance.

4. Donate To The National Coalition Against Domestic Violence

The NCADV aims to stop domestic violence, and given that 1 in 3 women and 1 in 4 men have been victims of some form of intimate partner violence, it's an incredibly important cause to rally behind, especially now. You can donate, volunteer, and raise awareness through a variety of ways.

5. Refuse To Be Silent

Sexism is pervasive, and it's time we stop letting it happen. Next time someone says something sexist, call them out on it. It can be scary, yes, but it's essential. Women can show the country we matter by sending a message that it's unacceptable to treat us as anything less than equals. Same goes for any other marginalized group.

6. Support She Should Run

She Should Run is a nonprofit and movement "working to create a culture that inspires women and girls to aspire towards public leadership." We didn't put a woman in the White House in 2016, but I firmly believe it will happen one day, and it's especially important now that we encourage women to run for public office. There are a number of ways you can support She Should Run. The Ask a Woman to Run initiative will send an email to a woman you believe is qualified and encourage her to run and connect her with resources. You can also nominate yourself to run for office on the organization's website. Finally, you can volunteer for or donate to She Should Run.

I'm not saying that you're never allowed to criticize a woman ever again, but it is important to support each other and not be misogynistic towards other women. For instance, just because you may not support Donald Trump is not an excuse or opportunity to slut shame his wife, Melania. When our country is trying to silence our voices as women, it's important we don't feed into it further by tearing each other down using the same sexist rhetoric used against us.

More like this
Iran Has Issued A Death Sentence Over Mahsa Amini Protests
By Catharina Cheung, Darshita Goyal and Maxine Harrison
Amanda Gorman Shared A Powerful Message On Meghan Markle’s Penultimate Podcast
By Darshita Goyal
Wimbledon Alters All-White Kit Rule Amid Candid Period Discussions
By Catharina Cheung and Rachel Mantock
10 Thanksgiving Alternatives You Can Celebrate This Month
By Katie Mitchell
Get Even More From Bustle — Sign Up For The Newsletter