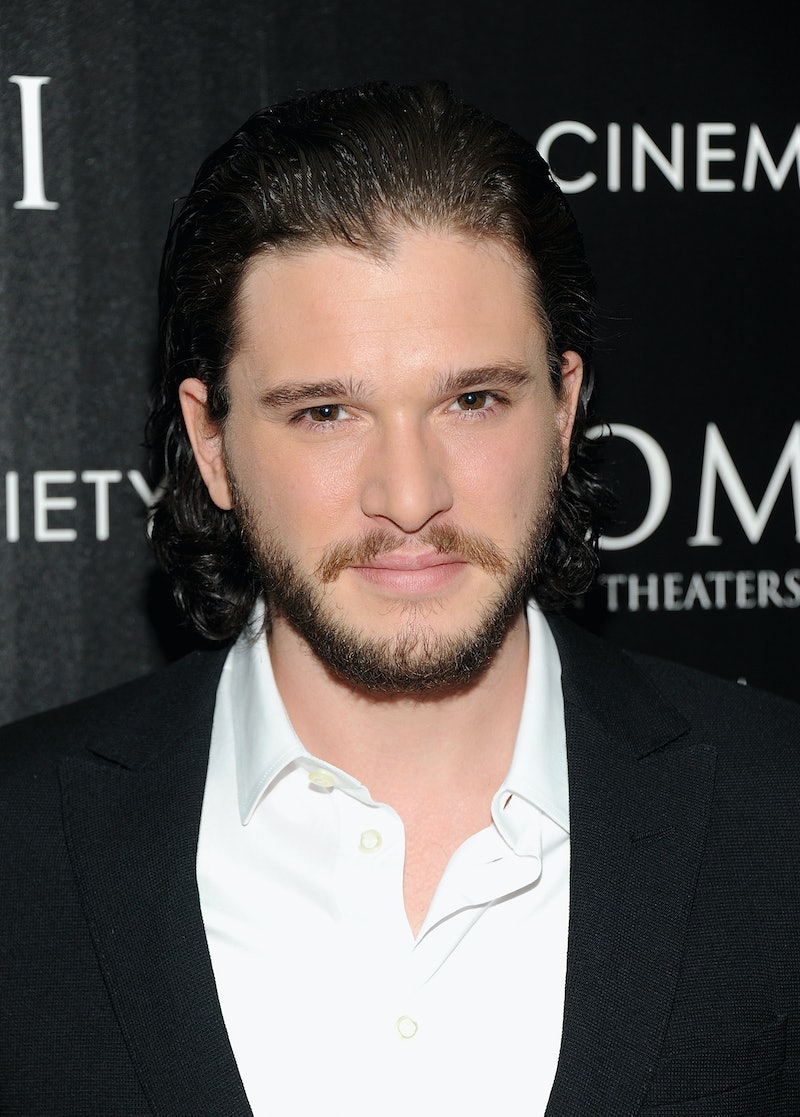 This season of Game of Thrones seems like it's going to be chock full of changes: Jon Snow, who previously knew nothing, will actually know something this season! Well — at least he'll be talking more than before, anyway, which is a lot to say about him considering he's been a brooding, brown-eyed bastard since the show started. Game of Thrones actor Kit Harington told Entertainment Weekly that Jon Snow will be saying way more in Season 4 of Game of Thrones. In fact, it will be his biggest season yet! It makes sense, as it's pretty apparent that he now has a lot more to say. (Wouldn't you, too, if the person to whom you gave your virginity shot you with a bow and arrow? Yeah, thought so.)

But it's not about Ygritte. Harington expressed how now that our favorite bastard has no older, more patriarchal figures looming over him, he's at liberty to speak his mind much more freely. He's not being spoken to, he's doing the speaking up. Harington said:

He starts talking more [...] This season is Jon’s biggest season. The major thing for him is he doesn’t have the usual patriarchal figure over his head telling him what to do. There’s no Uncle Benjen, no Qhorin Halfhand, no Mance Rayder [...] He’s never spoken much, he’s always been talked to [...] He absorbs things and I like that about him. This season he had a speech and it felt very weird and unnatural playing Jon Snow for three years — he’s such a silent character — for him to make a stirring speech. It was very well written, you can tell he doesn’t want to do it but he has no choice.

We know that Snow's got a rebellious streak; he's pretty much broken every single one of his vows as a member of the Night's Watch. We've seen his violent side, we've seen his aggressive side, and we've seen him get naked (wait! No! That was an ass double!) with Ygritte. Still, with preparing for war at Castle Black, don't expect Snow to be too fixated on his former lady love; he's got important things to do! That's right, Jon Snow! You ride that testosterone wave!

Anyway, we've got way more to see with Jon Snow. His character has developed enormously, and now we're going to get to see the big pay-off onscreen. Harington says:

There has been in the past — not quite rightly — from the fans a feeling that Jon Snow’s story has not been done justice and I don’t think that’s correct [...]I think some of the bits have been building to this season. We get a lot of payoff for his storyline and The North storyline.

So yes! There will be more Jon Snow...but the word is still out on just how much more of him we'll see. Like, there will be more screen time, and more words from Harington's character, but still no word on if we'll be seeing him sans clothing (even if he does think more male nudity on the show is warranted).

Regardless, this should get you even more excited for Season 4, which premieres April 6.

Til then, get ready to revoke this statement: