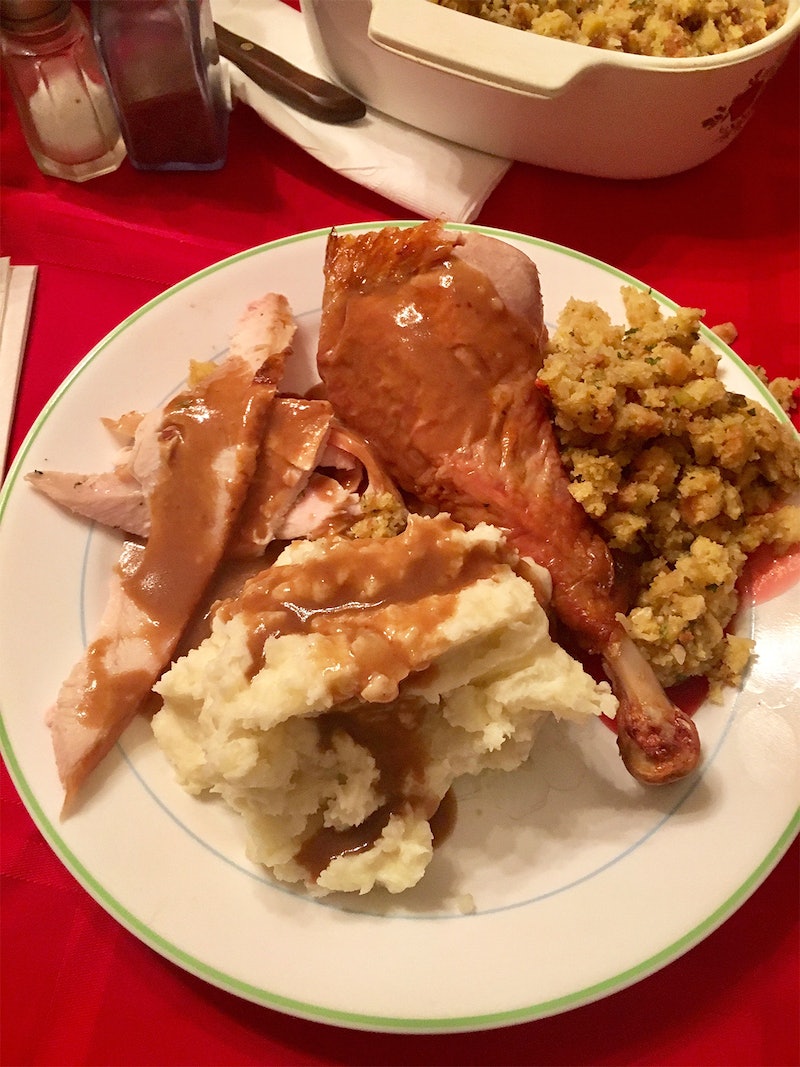 Unless you're a vegetarian, celebrating Thanksgiving without a turkey seems a little wrong. And since no other type of poultry would be a reasonable substitute (I mean, can you imagine eating chicken instead?) you might be wondering why we eat turkey during every Thanksgiving, anyway. How did the tradition start up, and what makes turkey so special during this November holiday? Why is it that almost 90 percent of us consume it every single Thanksgiving?

Sure, the best answer is "because it's delicious." (Especially with gravy.) But, as you probably figured out, there's a lot of history behind what we place on our Thanksgiving table.

While history is definitely involved with the main course, you might find it hard to believe that the very first Thanksgiving actually failed to include the famous bird. Looking back, it seems like turkey just wasn't on the menu when the Puritans and the pilgrims celebrated long ago. In fact, back in 1621 during the first documented "Thanksgiving," the day was probably more focused on religious ceremonies than dinner. When dinner was served, historian Andrew Smith believes that the actual main course was probably fowl or deer. Can you imagine eating deer every year? It just doesn't have the same... I don't know... finesse to it.

The first big dinners were said to have taken place in the late 18th century. While it really took off after the Civil War, New England reportedly celebrated years earlier. There, they celebrated a successful harvest, and decided to eat turkey because it was pretty plentiful. This celebration was all about giving thanks for good land, and good fortune as far as crops were concerned. As we all know, Thanksgiving is definitely all about gratitude today. And that's something that will likely never change as the years go on.

William Bradford also helped give us some clues as to why we eat turkey on Thanksgiving. Based on his found journal, it was apparent that wild turkeys were incredibly easy to access in the Plymouth area. Also, at that time, turkey was often regarded as being a plentiful American meal. And, yes — it was definitely plentiful. Back then, before factory farming totally took over, turkeys often weighed up to 60 pounds. So, cooking one was probably a bit more of a struggle than it is today.

Again, just think about that. Carving up a 60 pound turkey. Yikes.

Sarah Josepha Hale should also get a bit of credit for spreading the word that turkey was the king of the Thanksgiving table. An American writer who was born in the late 1700's, Hale campaigned for Thanksgiving to be an official American holiday. Her influence definitely helped shape the day into what it currently is today.

And, as she was a writer, she made sure to note that turkey was a popular dish for the big feast through the written word. In fact, in her book Northwood, an entire chapter was dedicated towards eating delicious turkey on Thanksgiving. As people are impressionable, obviously her adjectives helped make this a desirable choice.

That said, we've got many people to thank for the wonderful food we see during the night of. So, when a relative gets a little too mouthy over the election results while you're sitting down for dinner, just pass them the turkey and perhaps interrupt them with a little bit of history.