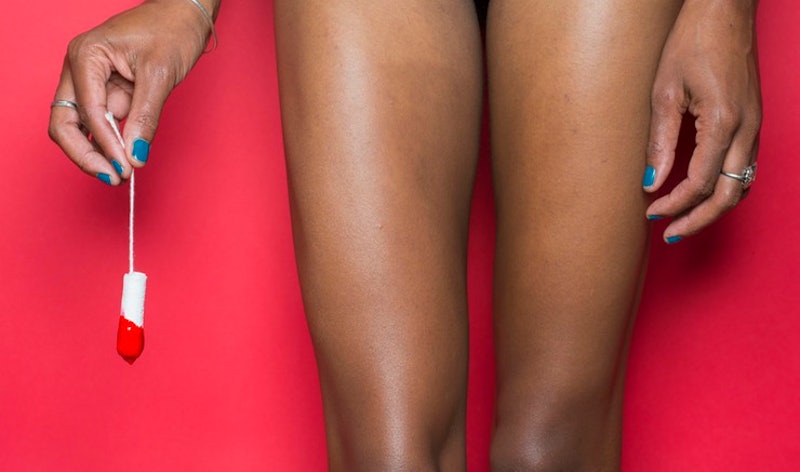 I think about language a lot, so I’m always interpreting signs. Recently, in the bathroom at the gym, my eyes settled on the standard sanitation box that read, "Please Discard Feminine Hygiene Products Here." The sign caught my eye — and annoyed me. I was menstruating, but I wasn’t feeling particularly "feminine," which society equates to "dainty," "sweet," and, most importantly, "discreet."

It got me thinking: in the context of products like pads and tampons, the word "feminine" is a euphemism meant to sweep a perfectly normal bodily function under the rug, to protect people like our President-elect Donald Trump from the idea of "blood coming out of her wherever." The term "feminine hygiene product" implies there is something inherently dirty and shameful about menstruation, since we clearly can't talk about it candidly.

And while it’s offensive to many cisgender women who don’t want to be told how to act because of their biology, it is especially alienating to people like Sawyer DeVuyst, a New York-based model, actor, artist, and advocate, who rocked the "feminine hygiene" industry when he became the first transgender man to appear in a period product advertising campaign for the groundbreaking period underwear brand THINX.

DeVuyst explains that, while he came out as transgender at the age of 23, he didn’t begin taking hormones until he was 27. “So that leaves me with five-ish years of identifying as a man, but also getting my period,” he tells Bustle.

"A lot of people don’t realize that some men do get their periods, because it’s just not talked about. There’s a lack of trans male visibility. Nobody is talking about [trans men’s] periods and menstruation, because it is a source of shame," DeVuyst says. "It strips away masculinity, because it is viewed as a very feminine thing. So it’s very cyclical in that way, that nobody is talking about it because it’s feminine, and that it stays feminine because nobody talks about it."

DeVuyst feels that the term "feminine hygiene product" is alienating to various people who have periods, and not just trans men.

“It's also alienating to [cis and trans] women who don't get periods! Women without the functioning anatomy to produce a period are still women. The existence of a period doesn't make someone any more or less feminine, or any more or less female.” He supports the idea that the industry needs to rename "feminine hygiene products" and simply call them "menstrual products" instead. "‘Menstrual products’ works! Menstruation is literally what the products are for. I always err on the side of anatomical or literal terms."

The "feminine hygiene" phrase doesn't just skirt anatomical terms; it perpetuates the fear of body parts and fluids. In 2015, CEO and Co-Founder of THINX Miki Agrawal told Forbes she believes the overwhelming majority of consumers exclusively use applicator tampons (as opposed to more cost-effective and eco-friendly alternatives like menstrual cups) because "They're afraid to look at or touch their own blood, or they're afraid to put their finger in their own vagina." The ever-growing global feminine hygiene industry hinges on this fear; it is projected to reach $15.2 billion by 2017.

Anxiety about menstrual blood is closely linked to fear of being seen as weak, dirty, incompetent, and, of course, histrionic, especially in the workplace. JB Rubinovitz is a technologist who’s been outspoken in the press about gender inclusivity in the online tech and coding communities. She says gender equality and inclusivity isn’t just a professional issue; strict gender binaries in commercial advertising damage people’s self image, too.

“I think euphemisms like ‘feminine hygiene product’ are employed because society struggles to differentiate biology from gender,” Rubinovitz tells Bustle. “Furthermore, there is no one female biology. But, if society has labeled you ‘female,’ you’re vulnerable to being deemed emotionally incompetent/hysterical if you could conceivably be on your period.”

The widespread commercial availability of the menstrual cup in the early 2000s induced a shift in how people deal with periods. Instead of disposable pads and tampons, which absorb menstrual blood and are quickly disposed of, menstrual cups collect blood inside the vagina, and must be emptied and cleaned before they're reinserted. They require a desensitized, direct involvement with menstrual fluid to use.

But, even though they're called "menstrual" cups, these products tend to be marketed in a very "feminine" way. The "Lunette" cup promises "nicer" periods. The biggest player in the menstrual cup space is "The Diva Cup," which is branded with pink daisies. Daniela Masaro, Brand Marketing Manager at Diva International Inc., tells Bustle that, though the industry is still primarily geared toward cisgender women, it's moving in the right direction.

"We feel The DivaCup is an excellent option for transitioning transgender men, as it is a safe, internal and reusable product that can be worn for up to 12 hours. We also do our best to be as inclusive as possible in our marketing campaigns, while focusing on the majority of our consumer demographic," she says.

Cathy Chapman, President of Lune North America, tells Bustle that the company is also diverging from the status quo.

"As we’re growing the Lunette brand, we have realized just how important it is to offer a safe space for everyone, including transgender people. By calling Lunette menstrual cups 'period care products' and not 'feminine care' or 'feminine hygiene products,' we hope that those who don’t identify as cisgender feel safe and welcomed into our community."

“From here on out, our entire company will be referring to our products as ‘menstrual products,’” she tells Bustle. “We have been so entrenched in the industry, that we’ve called [our products] all kinds of things, but we've mostly referred to them as ‘feminine hygiene products’ because of industry standard. But we're not ‘standard,’ nor do we do anything in a ‘standard way.’”

There’s even more room, beyond a language shift, to modify the way companies market menstrual products. In the near future, I hope other more mainstream brands will follow Agrawal’s lead. I also hope to see non-traditionally feminine people with periods featured in television commercials — because people of all gender identities can have a period.