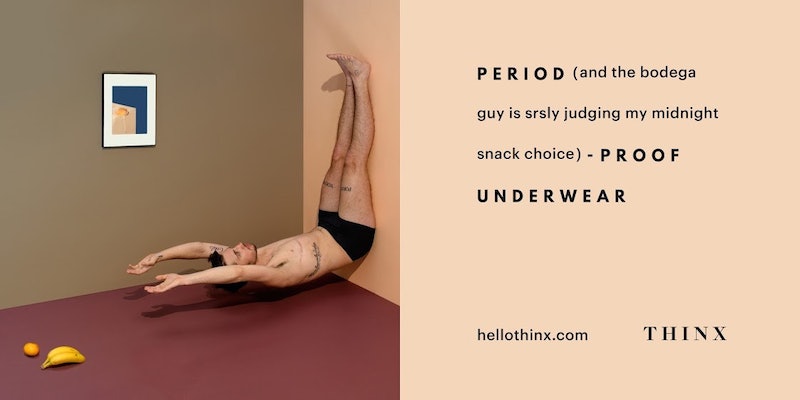 The period panty company THINX has just launched a new ad campaign, and it's filling the Union Square subway station in New York City with period-positive messages. Transgender model Sawyer DeVuyst will star in the ads, making this the first menstruation product ad campaign to feature a trans man. In keeping with THINX's previous NYC subway ads, he and other models posed in rooms with pictures of eggs and grapefruits, symbolizing the wonders of the reproductive system.

THINX's "She-EO" Miki Agrawal tells Bustle that the models' images were flipped upside down and on their sides to represent THINX's goal of shifting "the perspective on periods." The ads also feature playful captions like, "I'm really not try'na stain my date's sheets later tonight" and "the bodega guy is srsly judging my midnight snack choice," showing that menstruation doesn't have to take the fun out of everything.

Agrawal says the inclusion of a trans man was also a crucial part of the campaign. THINX sells boyshort period underwear for men, and along with destigmatizing periods, part of their mission has been to make people aware that menstruation isn't just a women's issue. "We thought it was high-time that people see a menstruating trans man 10 feet tall in the subway,"Agrawal says.

"We're hoping this is another step in normalizing periods in the public sphere," Agrawal says. "Just as with any of our other campaigns, it's going to be a little jarring to have it plastered all over somewhere as bustling as Union Square, but that's what it takes to break taboos. ... It's a very real and inclusive portrayal of periods as we experience them."

Through this ad and others, Agrawal says THINX aims to "reclaim the anxiety and shame surrounding your period, and to aim-fire at the patriarchy with our humorous, cheeky, and infectious feminist voice." Given that the company once had trouble even getting NYC subways to feature ads containing the word "period" or grapefruit-and-egg symbolism, a campaign in one of New York's most public places shows we're making huge strides in our acceptance of periods and in the way we're talking about them.

The company has also launched a new video, titled "Blood Bag," which shows a bag of blood emptying onto the underwear at the rate of a normal period while a woman's wearing it. The narrator makes quips at traditional menstrual hygiene commercials that show women in fields of daisies and blue liquid pouring onto pads. The woman in the ad starts playing a pineapple-shaped ukulele. "Doing anything on your period is a true phenomenon by any measure, right?" the narrator says. "That's a joke."