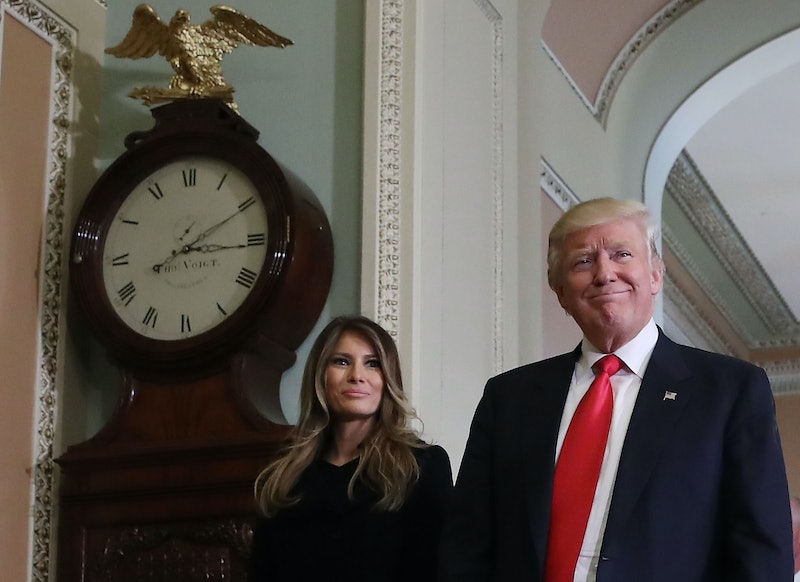 On Sunday night, Donald Trump granted his first post-election media interview to Lesley Stahl on 60 Minutes . Speaking from his penthouse in Trump Tower, the two discussed everything from the president-elect's campaign promises to the demonstrations against him taking place across the country, and boy did Trump have a lot of surprising things to say. In the segment's introduction, Stahl sets the stage by saying, "What we discovered in Mr. Trump’s first television interview as president-elect, was that some of his signature issues at the heart of his campaign were not meant to be taken literally, but as opening bids for negotiation." The conversation that followed was just as maddening as this statement from Stahl.

In its 48-year history, 60 Minutes has featured countless, well-done interviews with political figures. However, the CBS program arguably drifted into celebrity fluff piece territory with its Trump feature. Stahl interviewed Trump alone, but also spoke to the president-elect's family, at times stepping away from political questions to ask personal ones such as if Trump and Melania are nervous to be under the media microscope, if the family thinks the presidential campaign has hurt the Trump brand, and if they think 10-year-old Barron Trump fully understands what his father's becoming president means.

Aside from the above, Trump and Stahl still discussed topics important to his presidential term and the future of the country. Here are some of the most critical quotations from the interview.

1. On How Trump Wished The Campaign Had Gone

One of the defining characteristics of this most recent campaign seasons was its vitriol, especially when it came to Trump's remarks about Hillary Clinton whom he often called "Crooked Hillary" and once referred to as "such a nasty woman."

Apparently Trump wishes both campaigns had taken different approaches, telling Stahl, "I wish it were softer, I wish it were nicer, I wish maybe even it was more on policy..." though he qualified the statement by saying he regretted nothing.

2. On Building A Wall On The Mexico-US Border And If He Would Accept A Fence In Some Areas Instead

One of Trump's trademark campaign promises was building a wall on the Mexico-US border that he would then somehow get Mexico to pay for. Trump told Stahl that he will definitely keep this campaign promise, but when she asked him if he would accept Congress's proposed fence instead, he replies, "For certain areas I would, but certain areas, a wall is more appropriate. I’m very good at this, it’s called construction."

3. On His Pledge To Deport Millions of People To Mexico

"What we are going to do is get the people that are criminal and have criminal records, gang members, drug dealers, we have a lot of these people, probably two million, it could be even three million, we are getting them out of our country or we are going to incarcerate. But we’re getting them out of our country, they’re here illegally. After the border is secured and after everything gets normalized, we’re going to make a determination on the people that you’re talking about who are terrific people, they’re terrific people but we are gonna make a determination at that-- But before we make that determination-- Lesley, it’s very important, we want to secure our border."

4. On His Supreme Court Appointments

One of Trump's responsibilities as president includes nominating a judge to fill the late Antonin Scalia's vacant seat on the Supreme Court. It's no secret that, most likely, Trump's nominee will be a social conservative. He confirmed this in his 60 Minutes interview, saying, "I’m pro-life. The judges will be pro-life."

Stahl asked Trump directly if he is looking to appoint a judge that will overturn Roe V. Wade, to which Trump responded that in such a case abortion's legality would be left up to individual states to decide. When Stahl pointed out that this would leave some states without legal abortion access, Trump replied, "Yeah, well, they’ll perhaps have to go, they’ll have to go to another state" illustrating not only his ignorance of the medical dangers such a situation causes, but also how little he understands about how disproportionately such a situation would effect the same low-income, working-class people he claims to be championing.

6. His Statement To And About Anti-Trump Protestors

7. On People Carrying Out Acts Of Violence And Harassment In His Name

Trump told Stahl, who interviewed him five days after the election, that he had not heard of any acts of violence or hatred being carried out by his supporters. A likely story. When Stahl asked what Trump had to say to those people, he responded, "I would say don’t do it, that’s terrible, ‘cause I’m gonna bring this country together... I am so saddened to hear that. And I say, “Stop it.” If it — if it helps. I will say this, and I will say right to the cameras: Stop it." Despite his new statements, Trump frequently encouraged violence among his supporters at campaign rallies.

8. On Whether Or Not He Will Ask A Special Prosecutor To Investigate Hillary Clinton

9. On How He Views The Electoral College Now

Stahl asked Trump about his 2012 tweets criticizing the electoral college. The president-elect who owes his win to the electoral college responded with ambivalence: "I’m not going to change my mind just because I won. But I would rather see it where you went with simple votes. You know, you get 100 million votes and somebody else gets 90 million votes and you win. There’s a reason for doing this because it brings all the states into play. Electoral College and there’s something very good about that. But this is a different system. But I respect it. I do respect the system."

Yeah, the over 61 million people who voted for Clinton wish it went with simple votes, too.

10. On Whether Or Not He Will Be Taking The President's Salary

"Well, I’ve never commented on this, but the answer is no. I think I have to by law take $1, so I’ll take $1 a year. But it’s a — I don’t even know what it is." When Stahl informs him that the salary is $400,000 per year, Trump replies, "No, I’m not gonna take the salary. I’m not taking it." Trump would become the third president to decline his presidential salary after John F. Kennedy and Herbert Hoover, both of whom gave theirs to charity.

11. On How He Plans To Get Rid Of Obamacare

When Stahl asked Trump about the period between repealing Obamacare and implementing his new healthcare plan, during which millions of Americans could lose access to healthcare coverage, the president-elect responded that there would be no in-between time: "No, we’re going to do it simultaneously. It’ll be just fine. We’re not going to have, like, a two-day period and we’re not going to have a two-year period where there’s nothing. It will be repealed and replaced. And we’ll know. And it’ll be great health care for much less money. So it’ll be better health care, much better, for less money. Not a bad combination."