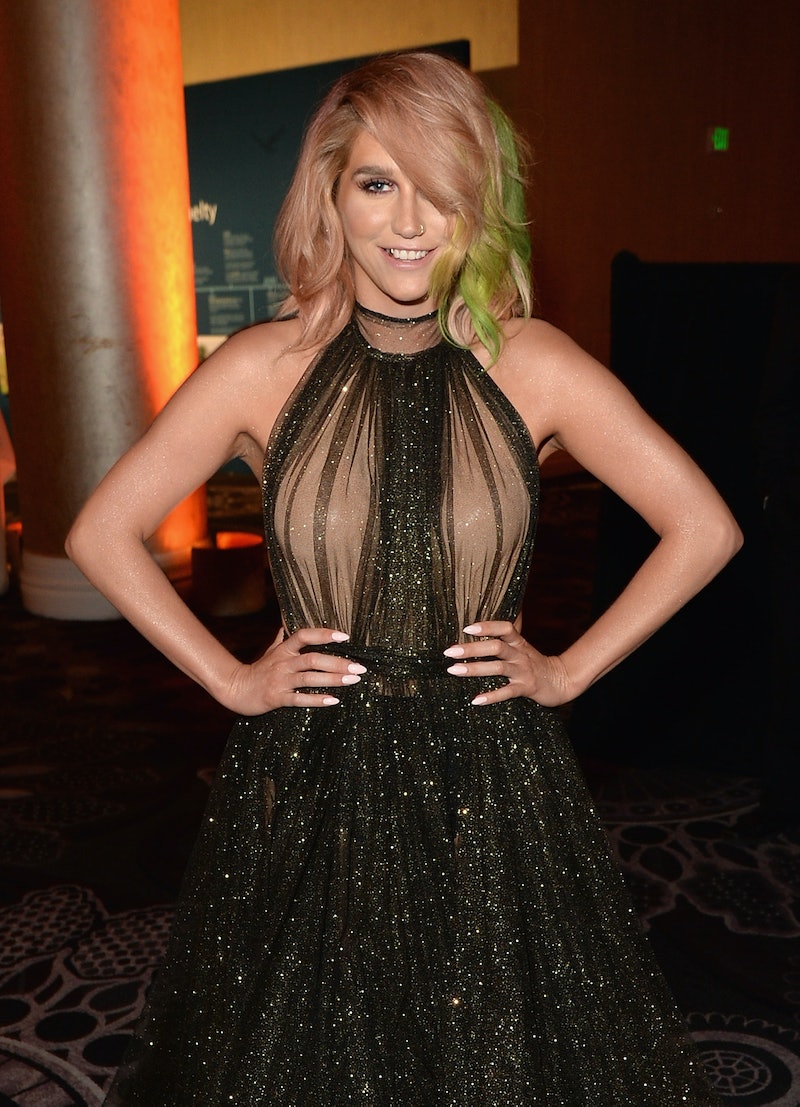 On March 6 this year, Kesha left rehab and dropped the dollar sign from her name, making it ten times easier to write about her. She also made the jump on Twitter, changing her handle from @Ke$haSuxx to @KeshaRose. Last night, Kesha appeared in public at the United States Humane Society 60th Anniversary Benefit Gala, walking the red carpet with glowing green locks that perhaps paid homage to the slime on the recent 2014 Kids' Choice Awards. It was her first red carpet appearance since going to rehab for an eating disorder, and the new Kesha has emerged like a phoenix from her former self's glittery ashes.

This is not to say that Kesha has completely transformed, but it is encouraging to see a somewhat more positive vibe in her public persona. Instead of typing "Ke$haSuxx" to grab her attention for a retweet, fans are treated to the gentler and more positive "KeshaRose." It's the singer's given name, after all, and perhaps a way of saying, "my music, under any other name, will sound as sweet." And it relieves a generation of grandparents who have been struggling to wrap their minds and tongues around the confusing "Ke-dollarsign-ha." It's definitely a departure from the glitzy "animal" who performed "TiK ToK;" in this YouTube clip from 2009, the singer, then 23, gently chides those who mispronounce her name. She points to the dollar sign tattoo on her hand as she emphasizes the correct pronunciation.

So, who is Kesha without the money? From what we can see of her in this brief appearance, she is favoring a more reserved red carpet look. Her hair is still the color of cotton candy, but it complements the rest of her glowing locks and skin. Perhaps, like her tail as a baby, the dollar sign will be left by the wayside. Perhaps this is her statement about the corrosive effects of money and fame, and her pledge to rise above them while staying true to her original self.

Then again, it's hard to unravel the strings of honesty and performance in any star's life. It's well-nigh impossible to reinvent yourself when you exist so strongly in collective memory and fandom. How many people, I wonder, are upset that their tattoos no longer match the singer's name? And, if Kesha is reaching a calmer state of mind, does that mean she'll give up her penchant for oddities like this?

Kesha, in joining the ranks of celebrities who have battled their demons in rehab, is facing several choices. She can pick up where she left off in her career, with her trademark zest and obsession with glitter. Alternately, at 27, she can use this time to rein back and focus more on her personal life. As Gwyneth Paltrow recently mentioned, fame is a full-time job, and it's taken its toll on more than one young celebrity. Whatever she choses, we can respect Kesha for going through rehab and modeling the correct response to her fans: eating disorders are serious, and battling them takes time, space, and dedication. With her "animals" and "warriors" supporting her, I hope she can continue to recover and make beautiful music. With or without the dollar sign.

More like this
Jake Daniels Just Became The UK’s First Active Football Player To Come Out As Gay Since 1990
By Sam Ramsden
Britney Spears Met The Weeknd & Sam Levinson, So She May Actually Be On 'The Idol'
By Jake Viswanath
Kim Kardashian Reacts To Kanye West’s Diss Song “Eazy” On 'The Kardashians'
By Jake Viswanath
Harry Styles Performed A Snippet Of Taylor Swift’s “22” & The Crowd Went Wild
By Jake Viswanath
Get Even More From Bustle — Sign Up For The Newsletter