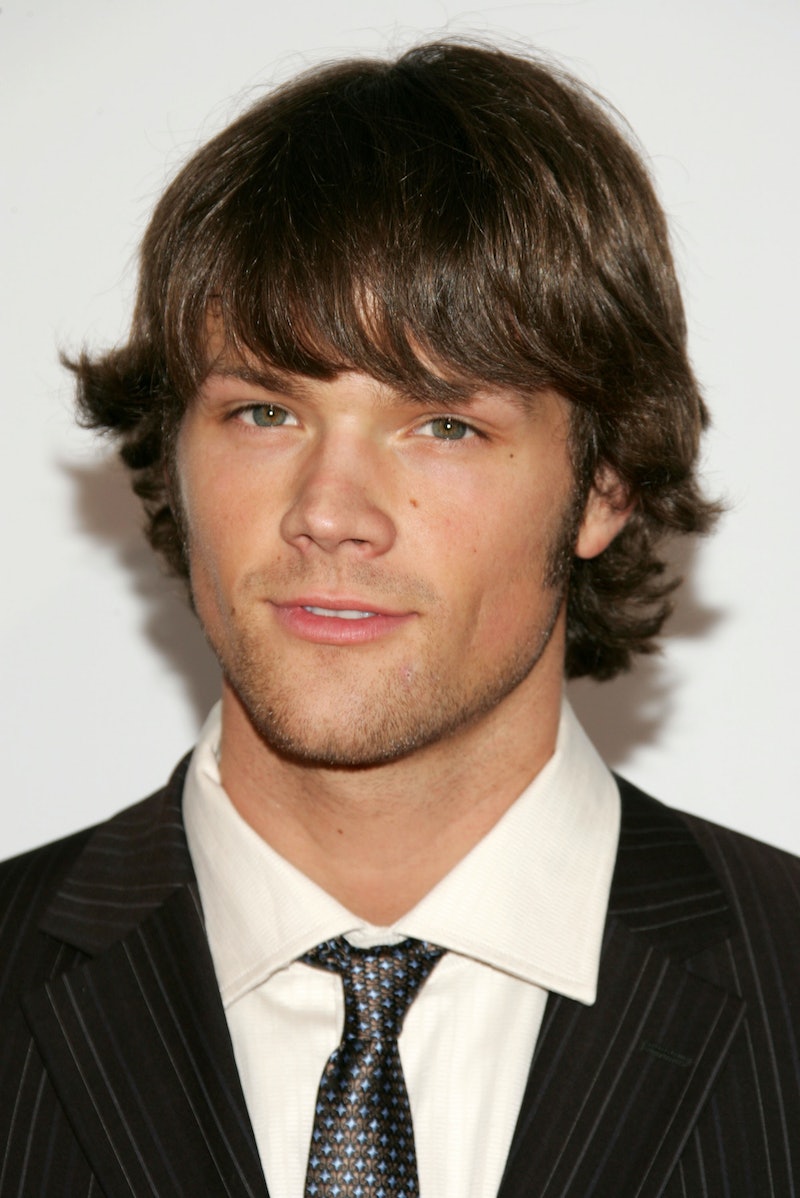 Jared Padalecki has been all up in my browser window this past week, whether dissing Kanye West and Kim Kardashian's Vogue cover or Twitter-ranting about American Airlines — but by far his most welcome appearance was in the results section of my BuzzFeed quiz, "Which Gilmore Girls Guy Is Your Soulmate?" Yes, I was all kinds of stoked at receiving the answer of "Dean Forester," Rory Gilmore's first-ever boyfriend, and thus promptly shared my results on Facebook (accompanying text: "This is the only one of these quiz results I'm posting, because this is the only question worth asking in the history of ever, and this is the only possible answer"). I learned rather quickly, however, that this was, shall we say, not a popular opinion: "???????????? you're a dean girl????" read one friend's incredulous response. Indeed I am — and staunchly — for a very specific reason, and now that my loyalties have been questioned, especially in light of Lauren Graham's buzzing about a Gilmore Girls movie, I feel the need to explain to the Internet once and for all why we should give Dean some serious love.

To clarify, I'm talking about the real Dean — OG Dean, if you will, circa Season 1 — in the time of innocence and Doose's Market aprons, before the Lindsay marriage, the awkward rupture of said marriage, the terrible haircut. This is the Dean who just moved to Stars Hollow from Chicago, rocking a leather jacket and a subtle air of mystery; the Dean who introduced himself to Rory by recognizing her relatively obscure Rosemary's Baby reference:

From there, of course, the two went on to have a sweet if somewhat rocky romance (damn you, Tristan DuGrey), including dances and bracelets and a climactic season-ending kiss, preceded by the adorable declaration, "Because I love you, you idiot!" Okay sure, there was that time she cooked him dinner dressed as Donna Reed after a fight about how much he liked the idea of 50s housewives, but, um, she looked great in that outfit, right? Overall, in my humble opinion, OG Dean scores a near-10 on the boyfriend meter, with perhaps a point or two shaved off for being just too affectionate, if you're not into that sort of thing.

And then, overnight, he transformed into a nightmare human. No, really: Season 2 Dean is a dingus of the highest order — perhaps one of the most annoying characters ever to grace a television set. He whines and tantrums and leaves 9,000 smothery voice messages; he sports fake tanner and a puka shell necklace; he disses The Joan and Melissa Rivers Story and eye-rolls at the thought of doing an English accent after watching Monty Python and the Holy Grail.

In fact, the entire first episode of that season revolves around Rory's grandfather berating Dean for not being special or smart or worthy of his granddaughter — Dean, who was going to build Rory a car with his bare hands just episodes ago — as if to telecast straight to our brains, "DEAN SUCKS NOW, FYI." And why, you ask, would his character make such a spontaneous and horrible 180? Because the writers needed to make room for Jess, of course.

Yes, Jess Mariano (AKA, Milo Ventimiglia) comes to town about 4 episodes into Season 2, sporting a puffy vest and a whole lotta New York City 'tude, in order to spirit Rory's heart away with a stray Gogol reference and some broody, broody eyebrows. He seems to arrive just in time — a welcome respite from Dean's mind-numbing blah-dom, all too ready to sneak into Rory's room and lend her a copy of Franny and Zooey (if you know what I mean). "What do you and Dean talk about? ... I mean, does he know Bjork?" he asks her at one point, incredulous. No, of course not, Jess. Why would Dean know about Bjork? He can barely count to 10. The puka shells have melted his brain.

But let's review: Cool jacket, pop culture references, ties to an interesting city — who does this remind us of? Could it be OG Dean, perhaps? Apparently, Amy Sherman-Palladino & Co. only had one template for Attractive Teenage Boy, and in order to make sure Jess secured the role of new hip kid on the scene, they had to zap all of his predecessor's powers in one fell swoop, leaving Dean bereft and hopelessly floppy-haired. Watching Dean in Season 2 is like watching King Theoden of Rohan under the influence of Grima Wormtongue — lifeless, but mournful behind the eyes, like he's somewhere inside that too-tan shell of his former self, powerless to stop his own dull douchebaggery. His resigned porch-sat "She likes Jess, doesn't she?" will forever be one of my top 5 tragic TV moments.

Speaking of which, in his final scene on the show (Season 5's "Live and Let Diorama"), Dean — now long since married, separated, re-dating Rory, and re-broken up once more — rolls on by Luke's place and offers some unwelcome advice about his budding relationship with Lorelai: namely, that he should quit while he's ahead, because he'll ultimately just hold her back. On the surface, this represents perhaps his most frustrating act of villainy — because, Jesus, can't Luke and Lorelai be in a good place for at least 5 minutes? — but I like to think of it as a final jaded bird-flip to the writers who so royally and abruptly screwed him over. He's just passing on the mantra with which Rory's grandfather doomed him at the start of his decline: "They want more than this, don't you see that? And all you are is this... She's going to get bored." It's like he's talking directly to his crappified self of seasons past, and it is heartbreaking.

So, with that, I say we honor Dean — if not for who he was, then at least for who he should have been had he not been thrown under the screenwriters' bus in favor of a love triangle plotline. Because sure, Jess was great and all, but Dean was the perfect model of TV-land puppy-love, a sweet and unassuming and, yes, once-witty foil for everyone's favorite fast-talking mother-daughter team. Also, clearly, proudly, my soulmate.