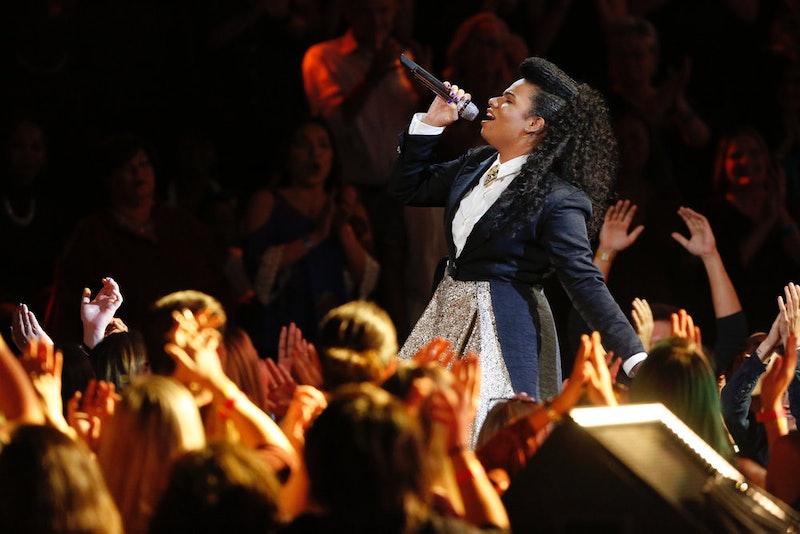 Amen, indeed! Never has a The Voice contestant slayed as hard as W é McDonald in the Top 12 Live Shows. McDonald channeled her inner rock-goddess and blew the audience away with a powerful rendition of "Take Me To Church." Seriously, where did that performance come from?! McDonald left everything she had on The Voice stage and it absolutely paid off. The Team Alicia singer showed the world a new side of her talent and quickly solidified herself a spot in the hearts of fans everywhere. After tonight, there's no doubt McDonald will be in the game for many more weeks to come.

McDonald is truly a one-of-a-kind artist. At age 17, she already possesses more talent than professionals twice her age. Everything about her sound and her stage presence is polished and mature. McDonald exudes confidence in a way you would never expect from someone so young, which is why she shines so bright.

Another reason McDonald shines so bright? Her voice. And I'm not just talking about her singing voice. The difference between her speaking voice and her singing voice is just so insane that it makes her even more impressive. One would never expect a squeaky, Minnie Mouse-voiced 17-year-old to even think of tackling "Take Me To Church," but that's exactly what McDonald did. And she did it well. That's because her singing voice is nothing like her speaking voice. There may actually be two people living inside McDonald's body because that's how different her sounds are. As soon as she opens her mouth to sing, McDonald's voice goes from high-pitched to low and deep while she herself transforms from a typical 17-year-old high school student into a full-on powerhouse rock diva.

To sum it up, McDonald is special. And that specialness is exactly why she is on The Voice. After all, the 17-year-old exudes everything that the show is about. And with Alicia as her coach, there's no doubt McDonald's voice is going to get even better. And guess what—we're going to witness that improvement because, after tonight, there's no way McDonald will be going home any time soon.

More like this
Kim K Is Putting Kanye’s Memorabilia — Like Grammys & Clothes — In A Vault
By Jake Viswanath
Julia Haart’s Husband Fired Her As CEO Of Elite World Group
By Brad Witter
What Jen Shah's Delayed Sentencing Could Mean For The 'RHOSLC' Season 3 Reunion
By Brad Witter and Jake Viswanath
What Is Julia Haart’s Net Worth? The My Unorthodox Life Star Is A Shoe Mogul
By Radhika Menon
Get Even More From Bustle — Sign Up For The Newsletter