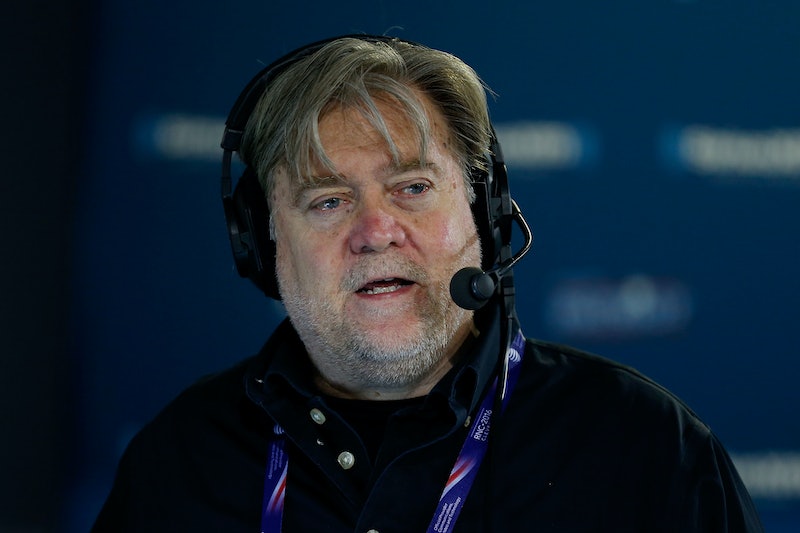 The news of President-elect Donald Trump's appointment of Steve Bannon as the Trump administration's chief strategist and senior counselor has sparked backlash across the board. Many are wondering who the former executive of alt-right website Breitbart is, which prompts the question, what is Steve Bannon's net worth?

Bannon became Breitbart's executive chairman in 2012, and declared the conservative website the "platform for the alt-right." During his time at Breitbart, the website published articles with titles such as "Birth Control Makes Women Unattractive And Crazy" and "Hoist It High And Proud: The Confederate Flag Proclaims A Glorious Heritage."

But how much is Bannon worth in terms of money? Celebrity Net Worth, a website that says it uses a proprietary algorithm to find net worth, which is then fact checked by editors, estimates Bannon's net worth is $10 million. Seeing as he has been involved in investment banking and filmmaking, it would make sense that Bannon would have a net worth in the millions of dollars.

Before he joined Breitbart, Bannon served in the Navy from 1976 to 1983, according to Heavy. After receiving an MBA from Harvard University, he worked for Goldman Sachs during the 1980s. He then left to create his own financing company, Bannon & Company, which he sold in 1998, according to Bloomberg.

Bannon has been heavily involved in media since the 1990s; he was a partner at The Firm, a film and television management company. In addition, he most recently served as the chief executive officer of American Vantage Media Corporation and as Breitbart's executive chairman before stepping down to become the Trump campaign's chief executive.

Bannon was appointed to his position alongside Trump's White House chief of staff, Reince Priebus, the current and longest-serving chairman of the Republican National Committee. Priebus is a Washington insider unlike Bannon, who has been openly critical of the Republican Party. But the two have some political views in common when it comes to health care, border security, and Islam. Priebus said in a statement that he was "grateful to the president-elect for this opportunity to serve him and this nation as we work to create an economy that works for everyone, secure our borders, repeal and replace Obamacare and destroy radical Islamic terrorism."

It may seem like a long shot, but people against the alt-right who don't enjoy Trump's appointment of Bannon might want to try contacting their representatives and publicly opposing the Trump chief strategist. After all, it's worth trying to have your voice heard.