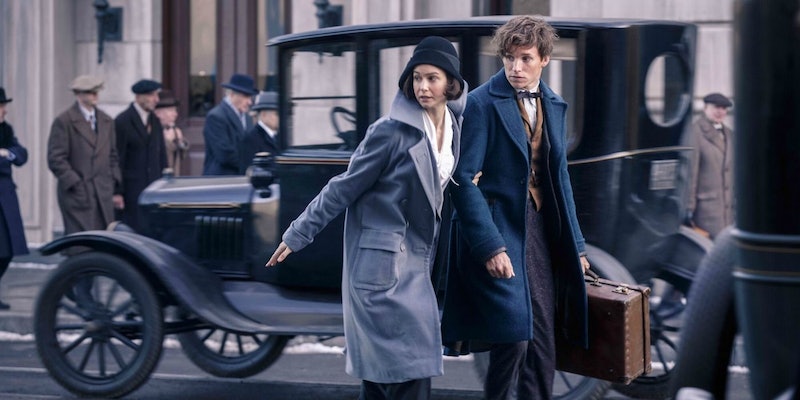 Every Harry Potter kid and adult has their favorite magical creature. Are you a hippogriff person or a thestral person? Do you prefer the house elves or the Hungarian horntail? Well these decisions are going to get a lot tougher when Fantastic Beasts And Where To Find Them comes to theaters Nov. 18. The inciting incident of the Harry Potter prequel is the accidental opening of a case belonging to Newt Scamander, the magizoologist played by Eddie Redmayne. Newt's case unleashes a Noah's ark of magical animals into 1926 New York City. And it's up to Newt and his allies to round them all up before anything too terrible can wrong. The title promises beasts, and beasts you're gonna get. The 11 beasts below are confirmed to be in Fantastic Beasts , and they look amazing.

Some of these animals you may remember from the 2001 Fantastic Beasts And Where To Find Them text book that J.K. Rowling released. But some of them have been created specially for the movie. And all of them would be an extremely confusing sight to a bunch of city-dwelling muggles. (Forgive me: No-Majs.) Some are cuddly, some are dangerous, some are scaly. But they're all magnificent and, sorry Mr. Redmayne, the real stars of the film. Check out these fantastic Fantastic Beasts.

Its name sounds like a play on the words "elephant" and "trumpet," but the look of the erumpent is a little rhinoceros-like too.

Not only are bowtruckles adorable, they're also little environmentalists. They protect trees that provide wand wood for wizards. And I don't know, I just feel like this little guy would get alone so well with Groot.

Every child who sees this movie is going to be asking for a niffler instead of a puppy for their next birthday. These cuties love to dig and burrow and they're also total magpies. They'll steal your loose change and your jewelry, but when they look like that, can you bring yourself to mind?

Thunderbirds are native to North America and can serve as a living, high-tech security system.

Murtlaps are what would happen if Ratatouille got lost in The Little Mermaid. They're rats with undulating finger-like growths on their backs. Less horrific than it sounds, I promise.

The demiguise doesn't need an invisibility cloak. It has its own ability to hide in plain sight. It can also tell you your future, unlike your worthless cat.

The occamy can also grow and shrink at will. And its primary purpose is to protect its eggs at all costs. So don't touch the baby or mama will get mad.

Billywigs are beautiful with that bright cerulean coloring. But their stings are venomous and can cause the victim to experience some strange reactions. Word is their stingers are what make Fizzing Whizzbees fizz.

The nundu reminds me of those dinosaurs from Jurassic Park who eat the guy who tried to steal the embryos. Do you see it? Anyway, the nundu is a large and silent stalker with breath that will kill you dead.

In Fantastic Beasts, the graphorn are nearly extinct. The lumbering creatures are at home in the mountains. Let's hope Newt can protect the last of the species.

The movie may be holding back some surprises. (Will we see a phoenix or nah?) But these Fantastic Beasts make up a fascinating collection.