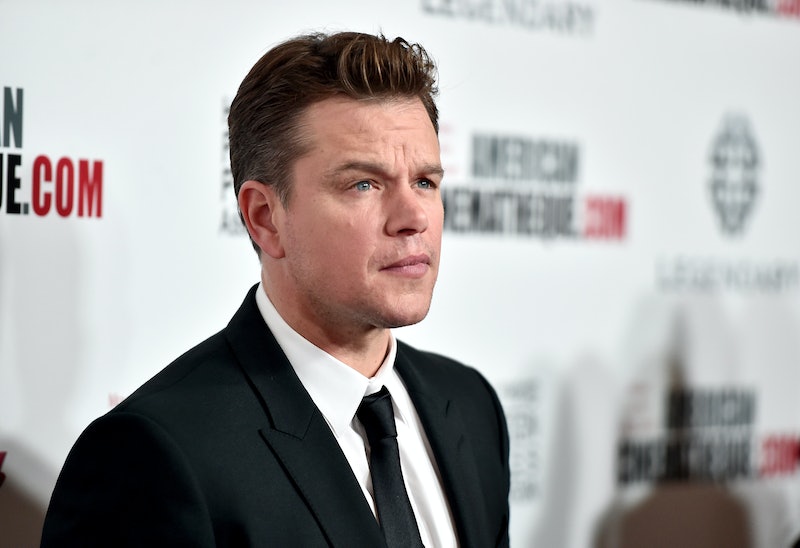 The Ocean's 11 franchise is getting the reboot treatment with an all-female cast, including Anne Hathaway, Sandra Bullock, Helena Bonham Carter, Cate Blanchett, Sarah Paulson, Rihanna, Mindy Kaling, and Awkwafina. While fans may be skeptical or tired of the "reboot" trend, it's awesome news nevertheless. According to Entertainment Tonight, Matt Damon will be appearing in an Ocean's 8 cameo, so it seems he is inclined to agree with "awesome." Damon played pickpocket Linus Caldwell in the original series and recently revealed to ET that he would be appearing in the upcoming film. But what kind of a cameo is this going to be? A big one? A small one? Will he be rocking a fake nose again (please, oh please, oh please)?

In the brief interview, Damon told ET, "I'm doing a little bit in the movie. I haven't read it yet, but the cast is phenomenal and I'm excited to see what those women do with it. It's going to be fun." But what does a "little bit" mean? Damon will probably be bringing back his role as Linus, so does that mean he'll be involved in some sort of heist with this new team? Or will they just bump into a reformed Linus or a Linus on some other quest? Maybe his former co-stars, George Clooney and Brad Pitt, will return as well.

Whatever the case, Damon has faith in the film, which is set in the same universe as the past Ocean's movies and follows a group of female thieves as they plan a multi-million dollar jewelry heist at the Met Gala. It seems he's proud to accept a cameo in the Steven Soderbergh produced-film, because as he told ET Canada in an interview in September 2016, "They're going to kick ass." Perhaps he's even willing to accept a cameo that is crucial to the plot?

How great would it be if Linus, the lovable innocent (but you know, still a criminal), is all grown up and ready to help some ladies rob a bunch of celebrities at the Met Gala? It's practically a dream come true.