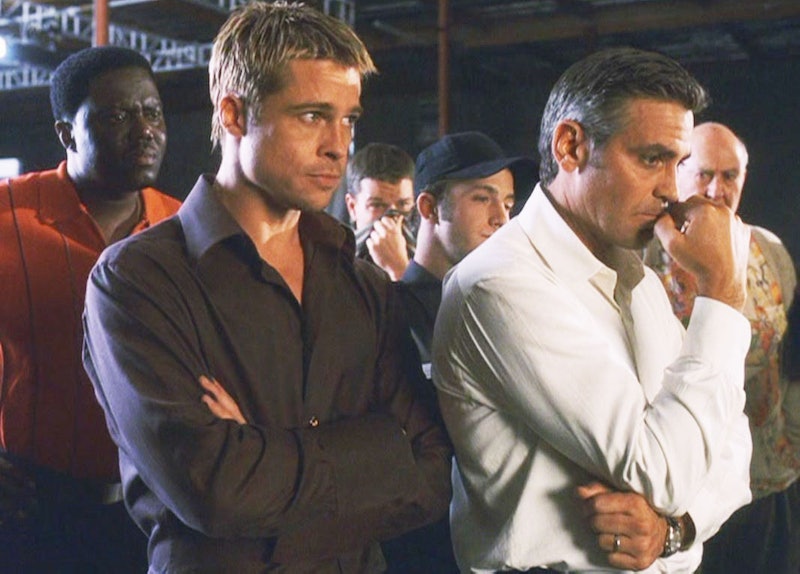 When the exciting news was first released back in October 2015 that an all-female reboot of Ocean's Eleven was in development, people seemed understandably thrilled. Not only did the film have the supreme cinematic goddess Sandra Bullock reported as playing the lead, but the Ocean's Eleven reboot also felt like a very real example of a seemingly positive Hollywood trend — the gender swapped reboot. With Deadline reporting an updated, potential cast line-up for the Ocean's Eleven reboot (titled Ocean's 8), the reality of the film feels far closer to being realized. The diverse (and, frankly, awesome) list of talented women includes Mindy Kaling, Rihanna, Anne Hathaway, Helena Bonham Carter, Awkwafina, Cate Blanchett, and the aforementioned Bullock. So why don't I feel more excited?

Women have faced vast amounts of inequality within Hollywood for too long now. Not only have female actors faced financial disparity between themselves and their male counterparts in the film industry, but female stories and characters have scarcely been given the same prominence that male ones have. A 2016 study by Martha M. Lauzen posted on the Center for the Study of Women in Television & Film called "Women @ the Box Office" noted that "on average, films with female protagonists or prominent females in an ensemble cast had significantly lower budgets ($45.0 million) than films featuring male protagonists ($77.9 million)." Women's Media Center noted in 2016's "Still Too Few Women Behind the Scenes in Hollywood" that, "By role, women comprised 11 percent of writers, 20 percent of executive producers, 26 percent of producers, 22 percent of editors, and 6 percent of cinematographers." At every level of the Hollywood system, women are at a disadvantage.

But, even with that in mind, I feel kind of done with gender swapped reboots already. Though the prominence of the Ocean's 8 all-female cast (and a diverse cast at that) is still worthy of being celebrated, I can't help but feel like women are being short-changed by this trend of supplementing classic male roles for female ones.

Simply, all-female reboots (as also seen recently in Paul Feig's Ghostbusters) feel almost like a cynical attempt by Hollywood to make it right with female viewers. After years of female stories, characters, and stars not being given the same levels of representation, attention, or financing in films that male ones have enjoyed, all-female reboots feel like the laziest attempt at progression. Though a film like Ghostbusters was obviously a gigantic step in the right direction, it still felt like a little as though women were being thrown cinematic slops instead of a fresh meal. In 2016, why is it that the movie industry feels as though it can only entrust a blockbuster movie to women as long as the film's story and characters are based on already successful male ones?

When you think of it like that, the all-female reboot is a little insulting. After all, a female leading cast should be allowed to tell original stories and portray characters who aren't just based on men. A failure to give women such originality on the screen leaves viewers with the impression that perhaps male stories are the only ones worth telling on such a scale. Thus, treading old ground with female feet becomes a superficial solution to a far broader problem.

Truth be told, Ocean's 8 is still in the pre-development stage, and, as such, it might still surprise us by overhauling the story completely to be inclusive of female stories, not just its female stars or characters, while still maintaining its crime-caper core. The film needs to avoid just retelling the same story with female characters in place of the male ones who are well established within the canon of the franchise. Instead, Ocean's 8 should endeavor to create a narrative where female problems are addressed and where the female experience is celebrated. The angle that these all-female reboots seem to take is simply proving that these are human stories, not gendered ones. Which is terrific — except they aren't rewarding women with the agency to tell their own tales. They aren't rewarding their female audience with the idea that their own experiences as women are worth nearly as much, or are equally as interesting, as male stories. They're just giving women what the original films should have given them: the mere chance to be represented equally in the plot.

For instance, it surely would haven't been so difficult to create an all new movie simply in the style of Ocean's Eleven, rather than creating an all-female reboot of it. The film could have still featured the same outstanding female cast, but without the safety net of the Ocean's Eleven franchise attached to it. There seems to be a sickly validation attached to the whole project, as though audiences simply wouldn't be interested in an all-female crime caper without the apparently sterling affirmation of its male legacy.

Women-led films shouldn't need the careful hand-holding of an already existent male franchise in order to succeed. They should instead be marketed and celebrated for their own merits and be allowed to stand on their own capabilities as great stories about women. Hopefully, Ocean's 8 will be the last all-female reboot that movie studios need to understand that women can star in, and lead, a successful blockbuster film. Hopefully, Hollywood can move forward from there, releasing more women-led films which allow female stories to thrive on their own. Hopefully, Ocean's 8 shares little more than genre and title with the original franchise, and leaves room for its female characters to develop their own identities outside of the canon and to present stories that women can not only relate to, but enjoy, for their uniqueness.

In 2016, women deserve better than to be asked to step into already well-worn cinematic shoes in order to prove their worth to the movie industry.

More like this
Netflix Settles With Mo'Nique After She Sued For Racial & Gender Discrimination
By Jake Viswanath
What Does The Presley Family Think Of 'Elvis'?
By Arya Roshanian
Chris Hemsworth Joked That Baring His Butt In ‘Thor: Love And Thunder’ Was A “Dream”
By Brad Witter
Photos Of The 'Elvis' Cast vs. Their IRL Counterparts Will Have You All Shook Up
By Grace Wehniainen
Get Even More From Bustle — Sign Up For The Newsletter