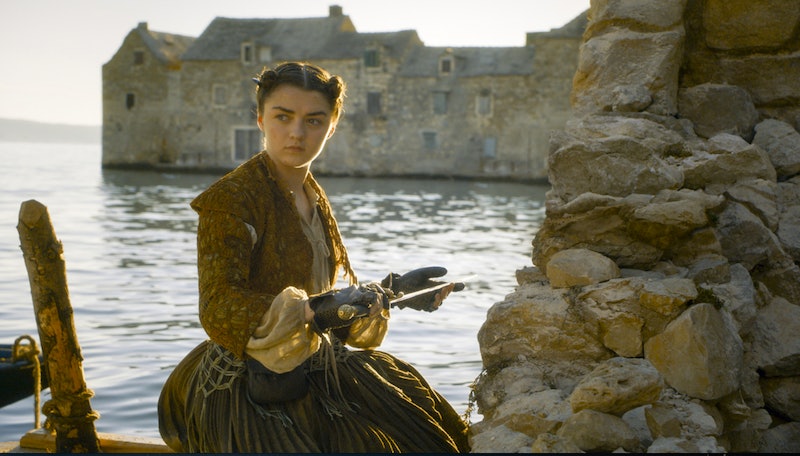 One of the best — and yet also complete worst — parts of any DVD box set is the special features and deleted scenes. Season 6 of Game of Thrones was released in stores on Tuesday, Nov. 15 to the utmost joy of fans. But there are some negatives. First, it's way too easy to marathon GoT, so watching all of the special features in the box, a piece of cake, in fact. Say goodbye to hours of your life that could have been spent doing something perhaps a tad more productive. Then, there are Game of Thrones deleted scenes — oh, those heart-wrenching reminders of what could have been yet shall never be.

Deleted scenes can be tough. Especially when the "bit" they provide actually seems to really help the story out, or at least to us viewers. We loved to watch them come, but how we hate to see them go. Uproxx pointed out that one of these scenes, which you can watch in the video below, is an appropriate clapback from the showrunners of the series. The setting was Braavos, as Arya spends time watching the performers which kept her captivated through most of Season 6. With a nasty look from Arya, the scene claps backs at viewers who complained about the (perhaps a tad excessive) amount of violence and profanity in the series. And guys, it's so true.

As Arya watches the play, two prim women (who are for some reason both wearing semi-matching blue dresses and hairstyles) stand next to her and seem ruffled by what they're seeing on stage as they keep making pointed looks at each other. To be fair, there is a lot going on that's troubling — the actor who plays the actor who plays Robert Baratheon (is this what one might define as a tongue-twister?) hits his family, calls his subjects "c*nts" for Ned Stark to deal with, and farts so strongly his leg shakes.

When one of the woman says, "Violence and profanity. How original," the look On Arya's face could freeze them into a block of ice. She gives her two cents, “Why don’t you just leave then?" and the women have no response save for some serious side-eye.

While this sassy retort is already pretty funny, it also is an interesting and meta look at the series. Sure, the women complain about the show, but they stick around and even end up laughing later on in the clip when Ned is getting the axe. At that point, Arya is obviously saddened and yet she also continues watching. Even though the women do finally leave when the actor who's portraying Tyrion rips Sansa actor's dress on account of the "disgusting and unacceptable" and "utterly gratuitous" behavior — they stuck around for long enough. It's really a shame such a funny reflection of the series, and humanity in general didn't make it past the chopping block.

It seems like the writers of the series were telling us, "Yeah, there's violence, but that's also what war-torn life was like in the Middle Ages. if you can't deal with it, stop watching... but chance are you won't stop watching." It's scary how right they are. Curse you, Game of Thrones deleted scenes. None of us asked for our minds to be blown today. But there GoT goes again, toying with our emotions in any possible way. No surprises here.