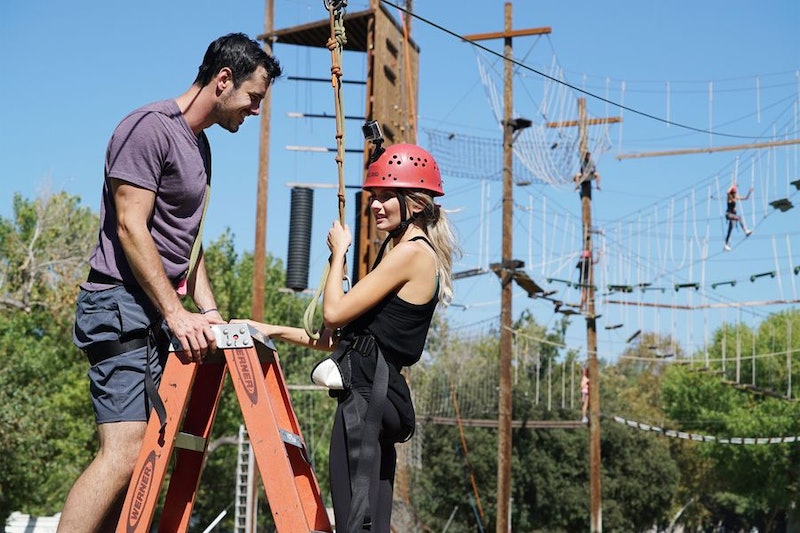 Getting engaged on The Bachelor is no easy feat, and it doesn’t exactly set a relationship up for success. So many Bachelor couples have broken up before the one-year mark — nay, the six-month mark — but Ben and Lauren are really trying to make things work. That being said, Ben and Lauren went to couples therapy on Ben & Lauren: Happily Ever After, and I feel like if they really want to stay together, they need to take it more seriously.

I know that this is all for a reality show (though Ben and Lauren told E! that they were in real-life couples counseling, too), but did the show have to include Grant and Lace and the Ferguson twins in the therapy session? It was super awkward that Grant and Lace allegedly know each other better than Ben and Lauren when Grant and Lace have been together for like, one eighth of the time that Ben and Lauren have. And having a pair of sisters there together? Talk about ineffectual. After a boring version of the “nearlywed” game, the gang did a ropes course with blindfolds and everyone was freaking. Finally, Ben and Lauren got to some actual talking about their feelings in their relationship, and things did get real.

This ridiculous display of “couples therapy” makes therapy seem sort of like a joke. Do you really have to do trust falls as you’re working out the foundation to your marriage? And with friends there? Ben and Lauren did start to get down to the nitty-gritty after two hours, but I wish the producers of the show made therapy look like an important tool in a relationship (should you need it) and not something like a game show quiz. Ben and Lauren were right to seek out therapy, but it could have been taken way more seriously. We all still would have watched.

More like this
JoJo Fletcher & Jordan Rodgers Got Married In A “Playful & Fun” Wedding
By Grace Wehniainen
Becca Tilley Confirmed Her & Hayley Kiyoko’s 4-Year Romance With A Heartfelt Note
By Brad Witter
Scott Disick’s First Time Around Kravis Was “Awkward,” To Say The Least
By Jake Viswanath
Kim Kardashian Joked That Her Wedding To Kris Humphries Was A “Gay Wedding”
By Jake Viswanath
Get Even More From Bustle — Sign Up For The Newsletter