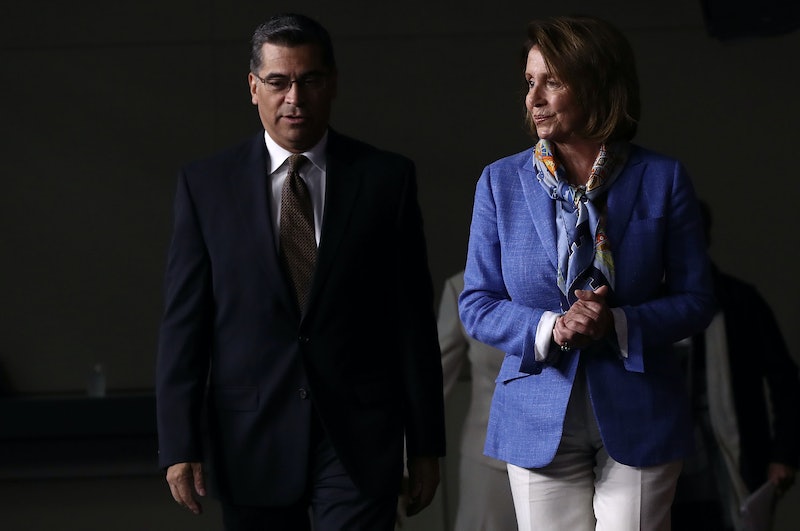 Tuesday, Nov. 8 spelled trouble for many, many Democrats in this year's ill-fated election cycle. While the political world continues to clear the rubble and figure out exactly how the election of Donald Trump and the re-election of a majority of congressional Republicans came to be, one top-ranking Democrat could soon find herself demoted. House Democrats decisively chose to delay their leadership elections, causing some to wonder: will Nancy Pelosi lose her job as House Minority Leader? It's too soon to tell, but there's some evidence to suggest that Democrats may be seeking a leadership change.

Following news that House Republicans voted unanimously to nominate Speaker of the House Paul Ryan to continue his term as the highest-ranking Republican in the House of Representatives, all eyes flew to the Democratic party to see whether they would follow suit. Instead, House Democrats decided to postpone their leadership elections, which were set for Thursday, Nov. 17, to Nov. 30. The delay is due, in part, to the party's desire to engage in some soul-searching, and to figure out what changes need to be made in order for them to remain relevant and electable.

While there isn't an immediate challenger for Pelosi's leadership role and, to date, her tenure as Minority Leader seems secure, there are some rumblings within the party about whether or not she'll maintain her leadership position.

While the official party line says that the decision to postpone the leadership elections was reached by consensus, some sources alleged that it was anything but. Given Pelosi's decision, along with the rest of the party, to work with the incoming administration rather than fight it, some Washington insiders are calling for new blood in the Democratic leadership in order to strengthen their electorate base and perhaps grow it. To that end, people like DNC member Boyd Brown of South Carolina said he doesn't think the current leadership are equipped to take the helm and create the kind of change that the party will need in 2018.

Brown isn't alone in his thinking: a cabal of young Democrats led by Massachusetts Rep. Seth Moulton issued a petition to postpone the leadership elections in a push Moulton said is meant to challenge "the status quo in the Democratic Party."

While it remains to be seen whether this push will result in what Moulton and other more left-leaning Democrats hope to achieve, the implications are clear: the party is facing death if they don't accurately and swiftly respond to their failures on Election Day.