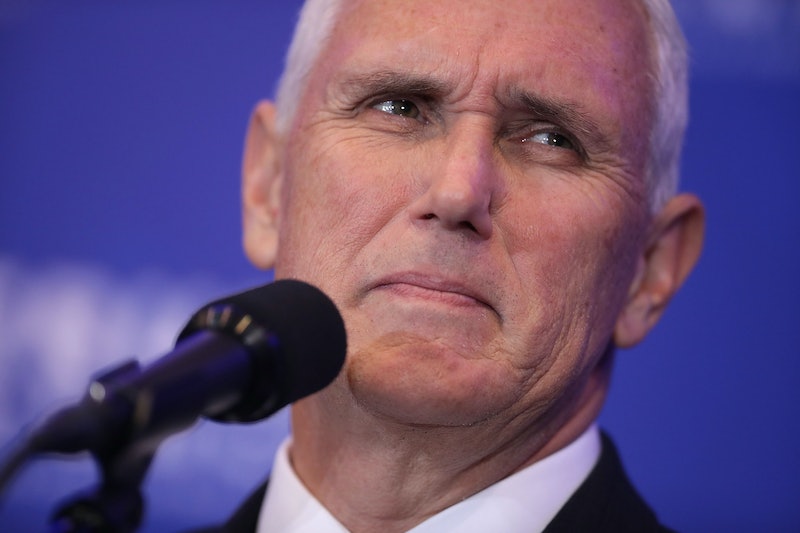 Mike Pence may only have been vice president-elect for a week, but he's already making waves in his upcoming role. He's at the center of an email controversy in his home state of Indiana, though the documents in question make up a cache substantially smaller than the 33,000 emails that put Hillary Clinton in hot water. Ironically, Mike Pence is trying to hide his emails, and in doing so, is exhibiting a dangerous double standard about public access to lawmaker communications.

Pence's email scandal is a far cry from the Clinton email fiasco that drew such harsh criticisms from Pence and his running mate — it only includes one email attachment, withheld during an investigation brought about by an Indiana lawyer who questioned a legal expenditure made by Pence in 2014. William Groth, the lawyer fighting Pence in state court, is arguing against Pence's lawyers who claim that an Indiana Supreme Court decision that protects state lawmakers from having to release their communications applies to Pence as well. Groth's argument is centered on the precedent a ruling in Pence's favor would set — effectively rendering the executive branch exempt from public records requests. In doing so, it would also create a dangerous and ironic double standard: that hidden emails are worthy of a major attack against one's political opponent, but are acceptable and worthy of defense when it comes to Pence's own emails.

While the scope of Clinton's and Pence's respective email controversies couldn't be more different, the irony still rings true: why should above-board emails between a lawmaker and a lobbyist (as the email questioned in Groth's suit is) remain private, especially given Pence's numerous attacks about Clinton's decision to put her emails on a private server? It raises the question of what is and isn't a matter of public interest, and to Groth (and me, and many others) communications from lobbyists are definitely important for the public to see.

If nothing else, Pence's insistence on keeping the contents of that email attachment hidden are evidence of the double-speak of politics — that politicians can publicly preach against a specific type of alleged corruption, but in practice, execute that exact same form of alleged corruption. If Clinton's emails were worthy of public scrutiny and reproach, then so are Pence's emails. It's unlikely that Pence will drop the suit and release the attachment by his Nov. 21 court date. And once again, it highlights the concerning fact that he and Trump can call their opponent a criminal despite the fact that she was cleared of wrongdoing, all while being the subjects of active trials themselves.