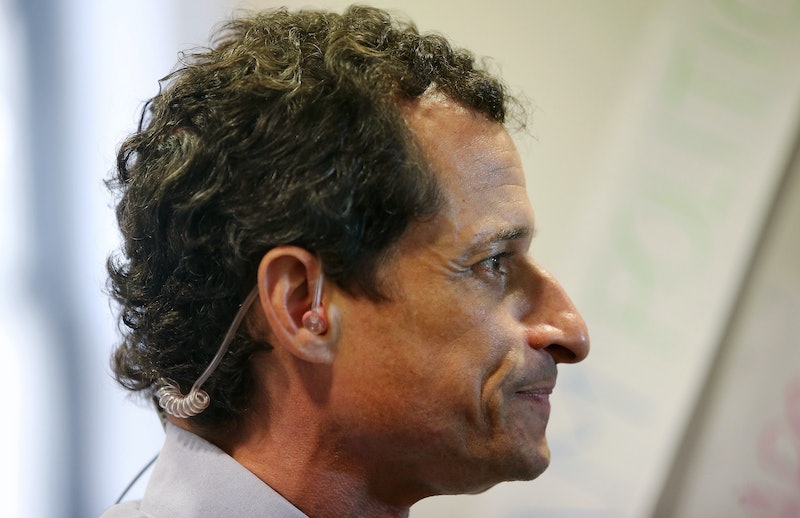 In an election cycle full of controversial and polarizing figures, few were as sensational as Anthony Weiner, the former New York congressman whose mere association to a top Clinton family aide might have contributed to the downfall of Hillary Clinton. Weiner, who's been in and out of the news for various sexting scandals over the past few years, is the estranged husband of Huma Abedin, and was once again thrust into the spotlight less than two weeks before the presidential election due to an alleged connection to the ongoing Clinton email fiasco. Given the untimely correlation between the former congressman and a defeated presidential candidate, it's easy to wonder: What does Weiner think about Donald Trump winning the election? Abedin's problematic spouse hasn't made any public statements, but his thoughts about Trump prior to his election were crystal clear.

There are no shortage of soundbites regarding how Weiner feels about Trump. In May, Weiner took to his now-deleted Twitter account and made his feelings about the president-elect well known by calling Trump "F*ckface Von Clownstick," a recycled joke made by Jon Stewart in 2013 when Trump made an anti-semitic comment about the retired "Daily Show" host. Weiner, like much of the country, also believed that Clinton was a shoe-in against Trump, saying on a Bloomberg Politics news show that he'd eat the host's shoes "if this isn't a blowout." It appears that once again, Weiner made a huge mistake — only this time, the rest of the country was right there with him.

For all of Weiner's jokes and scoffing about the president-elect, Trump struck a decidedly more somber tone regarding the disgraced former lawmaker — he even invoked Weiner's name in a Clinton attack ad just a few days before the election that raised the specter of FBI Director Comey's reinvigorated investigation into Clinton's emails, some of which were allegedly found on Weiner's computer. Trump also made some jokes of his own about Weiner regarding the scandal by "thanking" Weiner and Abedin for the boost he got after Comey's incredibly unethical and potentially illegal decision to publicize his eleventh hour inquiry into Clinton's emails.

On Oct. 30, one Huffington Post blogger asked a now-poignant question: Will Anthony Weiner elect Donald Trump? It appears that that prescient, tongue-in-cheek question was right on the money, and as the dust continues to settle, Americans for generations to come will grapple with the bizarre and ever-exciting happenings of the 2016 election cycle — a year filled with sexting, sexual assault allegations, witch hunts and, most importantly, the election of a polarizing reality TV star with no political experience to the presidency. Weiner hasn't yet made any public statements about Trump, but it's probably best if he stays far, far away from the public for now.