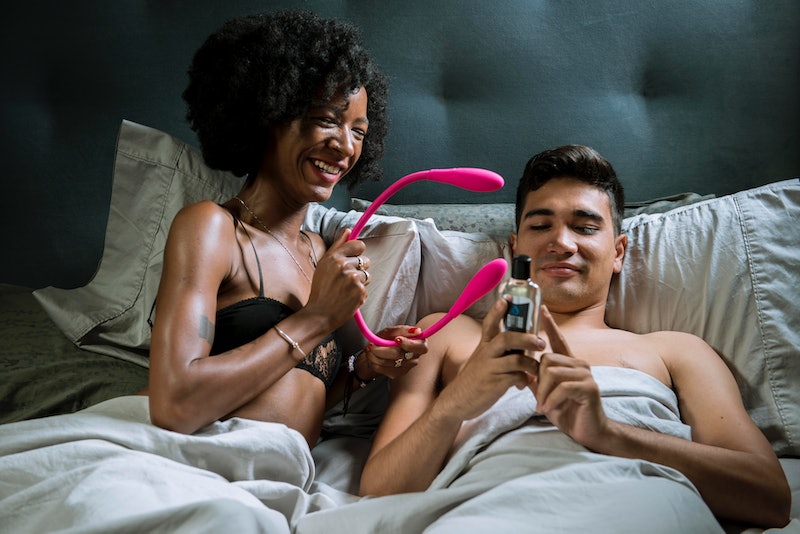 "Vibrators kind of level the playing field for women in the bedroom," Claire Cavanah, co-founder of Babeland, tells Bustle, "A lot of women really need the consistent stimulation on their clitoris to have same experience as men have."

But exactly how may people are using them — and what kinds do we like? Well, that's exactly what sex toy company Adam & Eve decided to look at. There are so many different options, from the tiny, pocked-sized buzzers to a realistic looking 12-incher. And that's not even getting into the rings, clamps, beads, and more. So Adam & Eve surveyed 1,000 people to find out just how many people use sex toys, who we're using them with, and what we actually like. And if you're a sex toy user, you really should check it out. Because, as the survey shows, you are definitely not the only one who likes to bring toys to the bedroom.

Here's what they found, but sex toys are a really, really personal thing:

1. Most Of Us Have Used Sex Toys

Boom. Sixty-three percent of us have at least tried a sex toy. Now, I would say that people who are answering a sex toy survey are more likely to have tried one than maybe the average person, but still. LIke I said, most of my friends have tried one, so I'm happy to follow with that logic.

But really, we're all looking for something different. As you can see, while realistic toys got the highest percentage, it's actually pretty split between a whole lot of choices — some like large, some like small, some want more power. It just goes to show how personal of a thing sex toys are.

4. A Lot People Don't Tell Their Partner About Their Sex Toy Use

This really surprised me — 60 percent of us tell our partners about our sex toy use, which granted is more than half, but a whopping 40 percent of us don't. If you're having an open, honest relationship with your partner, you shouldn't be ashamed or scared to tell them what you like in bed.

5. Almost A Third Of People Have Seen Someone's Sex Toy Out In The Open

6. More People Are Waiting For Their Partner To Initiate Than Are Willing To Do It Themselves

OK, folks, proof that we should start talking about it: Twenty-four percent said they initiate sex toy use, but 31 percent are waiting for their partner to bring it up. So, bring it up! More people are waiting for it to happen. If you want it, there's a good shot they will too.

7. Over A Quarter Of People Never Clean Their Sex Toys

Come on, guys. Seriously? Cleaning your sex toys is so important. And while 63 percent do it every time, a worrying 28 percent apparently never clean it. The schmegma, guys. Think of the schmegma.

The good news is that most people are happy to explore — or at least try — using sex toys. The bad news? We still need to get better at being open about the use and discussing it with our partner. Remember, most people use sex toys, so there's a good chance they do too. Don't be scared to bring it up. Oh, and clean the damn thing.

Shopping for a sex toy? Use the discount code "BUSTLE" on Adam & Eve for 50 percent off, plus free shipping.

More like this
The Best Time To Date After A Breakup, According To Experts
By Bustle Editors
What Is The Forest Personality Test? The TikTok Trend, Explained
By Georgina Lawton
Expert Tips For Being On Top When You're Plus-Size
By Lexi Inks
Hinge's New NFAQ Feature Is Demystifying Queer Dating
By Emma Carey
Get Even More From Bustle — Sign Up For The Newsletter