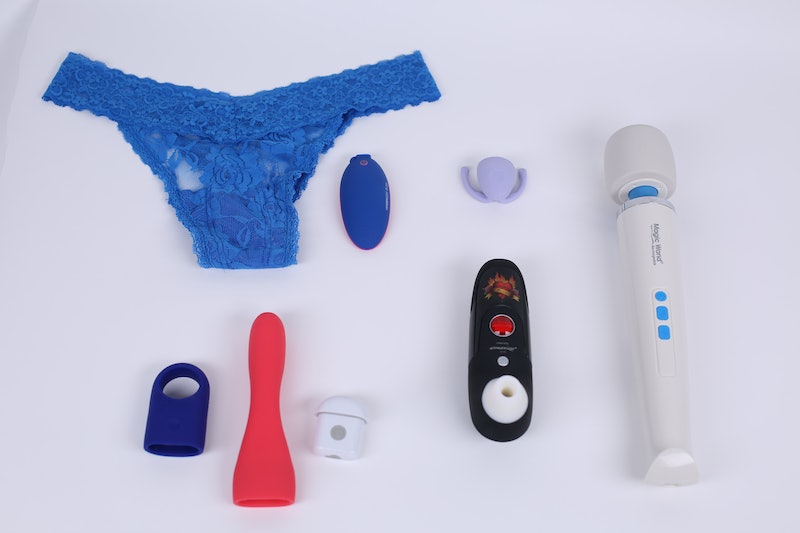 There's no doubt sex toys for women are much more widely accepted today and than they were in 1993 when Claire Cavanah co-founded Babeland in Seattle. With a mission of getting vibrators on every bedside table and taking the shame out of sex, Cavanah tells Bustle her goal for her feminist sex toy shop seemed far-fetched 22 years ago. "It was sort of like putting a man on the moon for JFK," she says. So what's responsible for the sex toy landscape changing?

For one, there are some game-changing TV shows and movies to thank for bringing sex toys into public conversation. Cavanah says Slums Of Beverly Hills and Fifty Shades of Grey contributed to taking the shame out of sex toys and exploration in the bedroom. And of course, who could forget Sex and the City's impact with the rabbit? "It was the first toy that shows where women like stimulation," she says. She not only saw boost in sales of rabbit vibes during the Sex and the City craze (it's still a popular toy), but she noticed a change in how women were shopping for toys at her iconic shop, too — they starting coming in with friends. But, as Cavanah points out, there's so much more work to be done in getting women what they need to have an orgasm.

"Vibrators kind of level the playing field for women in the bedroom," Cavanah says, "A lot of women really need the consistent stimulation on their clitoris to have same experience as men have." And, with the popularity of couples' sex toys now — she says the We Vibe is bestseller at Babeland — it seems like a lot of partners taking note of that.

Cavanah joined us on this week's episode of Bustle's Sex and Relationships podcast "I Want It That Way," to tell us all about Babeland and how to choose the perfect sex toy for you and your partner. Take a listen and check out the new products she brought us below:

The newest version of the classic sex toy (that started out as a back massager!), has some awesome new features. With four speeds and five patterns, it's both re-chargeable and stronger than the original. "It's probably brought more women to orgasm more than anything else," says Cavanah.

"There's this fear that sex toys are making people less into each other, that they're too mechanical etc, but they actually improve sex, make people want to be with each other, and can connect you over long distances," she says.

4. Ooh What Happens in Vegas Set