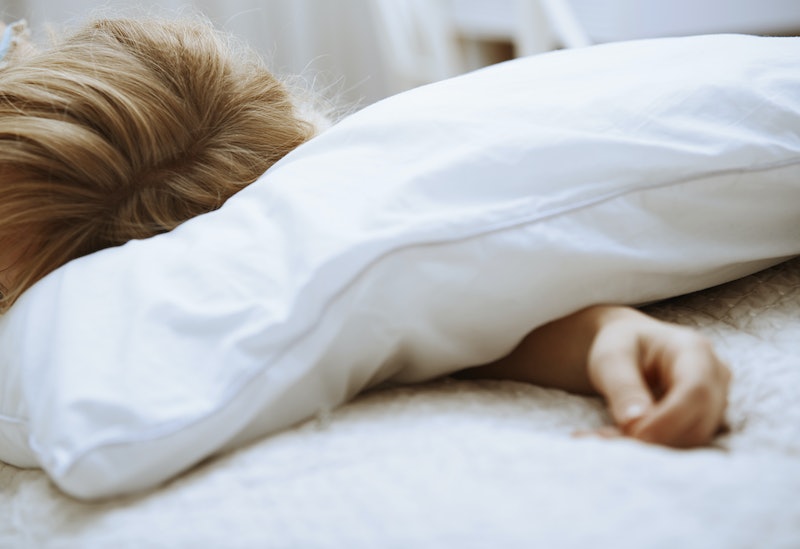 Virtually everyone has woken up from a nightmare, sweating through their pajamas, and spent the rest of the day worrying about what violent dreams mean. Are you stressed out at work? Foretelling the future? Subconsciously setting off down the path to becoming a serial killer? It's enough to make anyone anxious, which doesn't help matters. According to recent research, though, the answer appears to be rather more prosaic — of all things, your dreams might be influenced by your taste in movies.

In a study published in Dreaming, researchers at Ohio State University, the University of Michigan, and several Turkish universities surveyed more than 1,200 participants between the ages of 10 and 60 years old about their dreams and media viewing habits — watching TV, browsing the Internet, and so on — before bed. Among other questions, participants were asked whether they had watched any violent or sexual media within 90 minutes of going to sleep, whether they dreamed, and if so, what kind of dreams they experienced. Overall, about two-thirds of participants said they remembered their dreams at least sometimes, and 80 percent said these dreams were sometimes violent. A little less than half reported having sexual dreams sometimes.

Here's the cool part: Watching media before bed didn't influence whether they had dreams in the first place, but it did influence the content of those dreams. Researchers found that people who reported consuming violent media within 90 minutes of going to bed were 13 times more likely to have a violent dream that night.

The link wasn't quite as strong for sexual content, but it did exist. Furthermore, there was an association between overall media consumption and dreaming frequency: People who reported watching more media on a day-to-day basis — not only before bed — were more likely to report dreaming than someone who watched less.

But before you get too excited, there's a catch. The study only looked at associations between these factors, so researchers can't say for sure that media was the cause here. It's possible that people who have more violent dreams seek out more violent media, or that they play off of each other to create dreamscapes that wouldn't be out of place in a Quentin Tarantino film. That being said, co-author Brad Bushman suggested that media probably has some sort of role in what we dream about. "I do believe that the most plausible explanation is that the media we consume influences our dreams," he said, according to Science Daily.

Even if media turns out to influence dream content, it's far from the only factor at work. Research has shown that dream intensity, for instance, is dependent on everything from alcohol consumption to sleep deprivation. Nightmares are common in people with post-traumatic stress disorder (PTSD), but they can also become more frequent in times of everyday stress or anxiety. Depression, on the other hand, supresses dream recall, so you're less likely to remember your dreams. There's even evidence that smells influence the content of your dreams as they're happening; according to a small 2008 study, dreamers who smelled rotten eggs while asleep reported unpleasant dreams when they woke up.

Dreams are as complicated as the dreamers themselves. That's partly why people tend to disagree on whether dream symbols are universal; my recurring dream about losing my glasses while hanging out with Karl Marx during the apocalypse might not induce anxiety in someone with a weaker prescription, but it's not particularly fun for someone whose vision is so terrible as to be useless even in a dream.

That being said, if you find yourself plagued by dreams that mimic the episode of Game of Thrones you watched just before bed, you might want to reconsider your nightly viewing habits. Some experiences are better left to fictional characters.