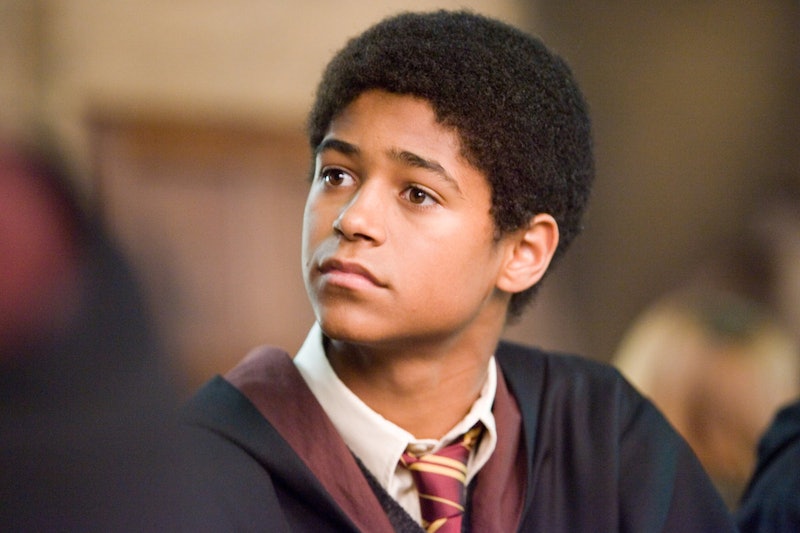 One of my favorite things about growing up with Harry Potter has been watching how new interpretations shape the series. Take, for example, Alfred Enoch recent reflection on his Harry Potter character Dean Thomas. Obviously, J.K. Rowling is the authority on all things Hogwarts and beyond, but the actors who take on the roles in the movies get to know them in ways that she couldn't have anticipated. Sometimes, they share insights that completely change the way I think about a character, and Enoch's views on Dean Thomas are the perfect example of this. After inhabiting the role of the young wizard, he's given me a theory: Dean Thomas is who Harry Potter would be without all the... y'know... Harry Potter stuff.

Both boys are the same age, have similar temperaments, and come from what they think are non-magic families. But when they are both thrust into the wizarding world with very little warning, Dean Thomas just has a lot less to worry about. As Enoch explained to hosts Marc Snetiker and C. Molly Smith on Entertainment Weekly’ s Binge podcast:

In the books, [Dean Thomas] was a very real part of it to me because he’s from a Muggle family — or so he thinks — and he goes into this world and he likes football — he supports West Ham. Obviously, Harry is our touchstone character, but he’s got a whole different thing going on. I always felt Dean was quite funny, he’s like an ordinary guy. He’s not an ordinary guy, there’s lots to him, but he’s come from the Muggle world and it’s like ‘Oh, this is cool.’ He wasn’t locked in a cupboard all his life.

Yeah, it's crazy how being basically imprisoned by your own family and finding out you're the living embodiment of the hope of an entire alternate world will change the way your school experience plays out. Things play out a lot differently when you're Dean Thomas, and the biggest change is that there's a cooler version of football.

Can you imagine, spend your life watching football and then there’s basically this better version where people fly around on brooms and three things are going on at once? It’s like, ‘Wow.’ I always liked him very much for that. I always thought, he’ll be alright. Not that he had it together, but well yeah, he had it together. He went out with Ginny. I think he seems cool, popular, him and Seamus get on very well, and he seems to be having a nice, normal — the enjoyable version of a childhood at Hogwarts, not the Harry Potter nightmare experience.

I never would have put this together on my own, but I think Alfred Enoch is totally right: Dean Thomas represents the childhood that Harry Potter could've had if his parents hadn't been killed by Voldemort and the scar on his forehead hadn't marked him for life as "The Boy Who Lived." Instead, he could've just been "The Boy Who Went To Hogwarts And Had A Brief Adjustment Period But Ultimately Turned Out Very Normal," doing reasonably well in his classes, excelling at Quidditch, crushing treacle pudding in the Great Hall with Ron Weasley, and macking on Cho Chang without all that pesky vanquishing of the Dark Lord getting in the way. (So time-consuming.)

It would've been a less interesting series, certainly, but a much more enjoyable school experience for our hero, and I'm grateful to Alfred Enoch for pointing this all out. Just more proof that the Harry Potter series is the gift that keeps on giving.