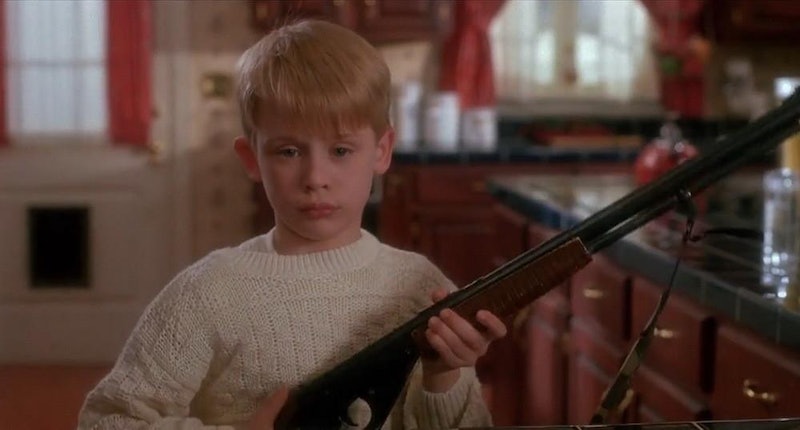 A classic move for adult millennials is to retreat into the comfort of their favorite childhood films when life gets to be, oh, a bit too much. And while sometimes this is a fun vacation from reality, other times you realize that those movies are best left collecting dust on VHS. Not because they’re bad, but because certain children’s films plots don’t quite work in modern times — either for grow-ups unarmed with rosy glasses, or well, actual children of today.

And today, we’re going to revisit some of those films. Maybe the core storyline would be upended due to the uprising of technology, or perhaps the core storyline barely made sense in the first place. For whatever reason, these are films that are either best suited to their time or just too plain ridiculous to ever reproduce, as a remake or otherwise. And yes, I understand vaguely that children put up with a whole lot of whimsy and sophomoric plot lines by virtue of being ... well, children. But it’s my safe assumption that kids of today basically come out of the womb tweeting, and that might make them a smidge more jaded than we were.

Anyway, scroll down for a handful of movies that might run safer as relics of your youth.

There's always a heavy darkness when it comes to Roald Dahl adaptations, and Matilda is no exception. However, I always found Matilda's treatment from her family, her biological family no less, to be just a bit too shy of outright child abuse. Also, who reads books anymore, amirite? (Um, I do, but I've seen my cousin's kids and they're all attached to iPads.)

Even with minimum wage bumped up to $15 an hour in some areas (what up, New York, I'm glad I'm set if I ever want to take a side gig at McDonald's), there's no world where Kenan Thompson would be able to pay off a car accident bill in a summer.

I know some of you want to grab your pitchforks and argue that Toy Story 3 was a modern masterwork with almost universal appeal. Right. But Toy Story 3 also really tapped on the emotions of millennials and their obsession with nostalgia. Like, it was the wrap-up of a legacy that an older generation had been long invested in. The truth is, if Toy Story was to be released today, it wouldn't really make sense, because much like books, children of this generation don't really play with toys.

4. Jingle All The Way

And again: Children do not play with toys. However, I don't think this sort of chaos would really happen in the age of Amazon and eBay, like, it's really hard to drop the ball like Arnold Schwarzenegger does in this.

This one could probably be argued, because there isn't a single Disney/Pixar collab that doesn't brutally tug at your heart strings, usually by way of parental or spousal death. Like, that didn't end with Bambi's mom. And hey, I can even understand the narrative importance of Mufasa's death in The Lion King, as rough as it is. However, the brutal murder of a sweet and elegant doe is something that should never happen in the history of cinema ever again, especially not in a kid's film.

There's no way Professor Brainard, absent-minded as he is, would miss his wedding three times in a row, not when there is so many technological reminders (aside from a weird robot who has a crush on you) about when a big event is forthcoming. Like the dude who claims to be "bad at texting," there's no excuse for that behavior in 2016.

I don't even really remember what the plot of this is, I just know that one of those animated inanimate objects is a radio, and ... no. Maybe if it was an iPhone with Spotify open or something, but who would watch that movie?

Space Jam, now 20-years-old, is still a delightful movie — one of my first favorites for a long time. There has been talk over the years about revising it with LeBron James and that's adorable and all. But Space Jam came out in an era when the Warner Bros. Store was still a thing. The Looney Tunes don't have quite the same cache with a younger set, but more than that, it's a space movie about basketball. Like, I don't know, take a step back and think about how ridiculous that is.

This will never happen again, because this disaster of a live-action movie will make sure it never happens again.

There are a couple of things that don't quite sit right with this one, although nothing overt. Maybe I just feel like Carmen and Juni would've figured out the spy thing a bit earlier if they grew up today. I mentioned that thing about children with iPads, right?

OK, Stuart Little is just an objectively silly plot. You don't just adopt a talking, clothes-wearing mouse for a son, that's not how adoption (or mice) work, let's not insult the intelligence of children.

Don't try to sit here and tell me this 10-year-old is a CEO.

Would Emma Roberts and JoJo really be that upset about moving away if you can just Skype your bestie? Just throwing it out there.

We should probably spare at least one generation from those deep psychological scars.

I mean, they tried to make talking live-action pigs not look fake, they failed miserably, and despite the special effects advancements have come about in the past 20 years, I don't think we should bring it back. As much as I adore talking pigs (and have dated a few), I believe this on a soul level.

No part of Home Alone would be feasible in 2016, like every angle of it could not happen. But the thing that's incredulous across decades is this: No matter how rushed you are or how many people exist in your gigantic Irish family, you do not misplace your child.

You really think some kid, even bed-bound due to illness, is going to listen to grandpa's kissing book for an hour and a half? Child, plz.

I mean, this had us believing for years that Pocahontas fell in hot Aryan love with John Smith, when he was really a colonizer and she was a literal child. Need I say more?

Same issue with misinformation (she was way dead, whoops). Less racism, though.

Oh man. I always had problems with The Santa Clause, particularly the part where adults act like there's no Santa Claus, but then there clearly is a Santa Claus because how does that explain all the gifts that magically get under the tree. Like, that is a deep plothole that's just never explained throughout the trilogy beyond "adults just don't believe in the magic." This aside, you can Google whether Santa Claus is legit or not, so...

More generally ridiculous than anything, magic sneakers or not, no tween is joining the NBA.

It starts from the fact that a director would steal a 14-year-old's essay and continues through two 14-year-olds booking a flight to Los Angeles to create chaos. No. A soft no to all of that.

Honestly, this film is too bizarro to work in any decade besides the '80s, and even in the '80s it was ... you know, a bit much. Plus, I don't think anyone should ever try to fill David Bowie's boots, or recreate David Bowie's bulge. Let's keep this in a beautiful time capsule.

Read the title again and tell me why this movie won't work.

The Pope has gone back and forth on this so many times that like, I don't want to confuse anyone.

I mean, is Robin Williams in drag as convincing now as it was two decades ago, when using prosthetics was pulling out the cinematic big guns?

The Sandlot isn't too egregious, I guess, but to kids of today, the 1960s might as well be the 1860s, whereas millennials grew up with the movie and could at least place the timeframe as "Oh, my parents might have been kids around then."

Because not only is the term "Rugrats" meaningless to the youth of today, but the idea of infants being lost in the woods is really very dark if you take away the cartoonish context. We're good with the one movie, thanks.