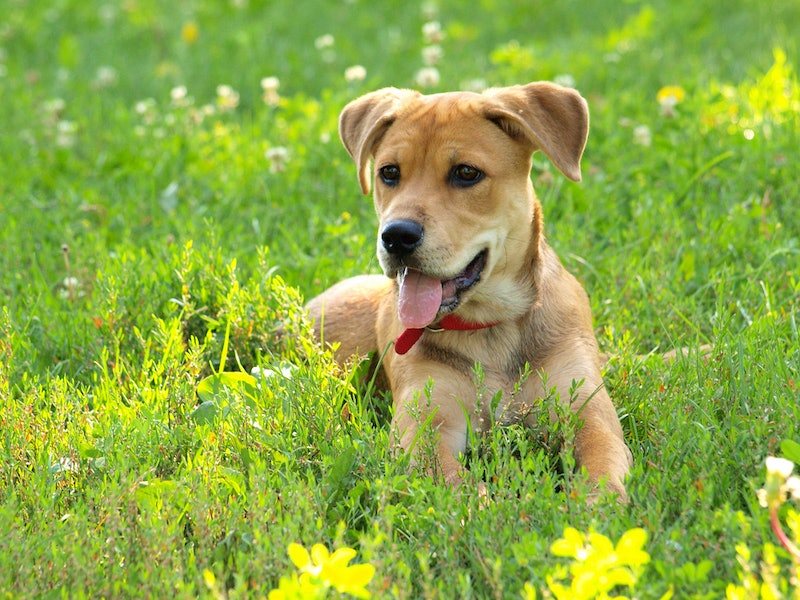 If you can't imagine an afterlife without your beloved animal companions, you officially have reason to love the current pope (even more than you already do, of course): Apparently Pope Francis believes that animals will go to heaven — and this time it's written in an encyclical, so it's for real. Not like, you know, that time last year when we all thought he had and got really excited but were ultimately disappointed.

As momentous as this joyous news is, it comes in a very anti-climactic fashion, and sadly it isn't an explicit, official announcement. But, as the New York Post points out, there are several passages in the Pope's recent encyclical, "Laudato Si," that implies animals will be joining human beings beyond the pearly gates. And while it might not be a ringing pronouncement, it is probably a comfort to the animal kingdom.

"Laudato Si" was mainly concerned with climate change and expressed the pope's position that counteracting climate change is a moral imperative. However, you can also find the following passage in the encyclical: "Eternal life will be a shared experience of awe, in which each creature, resplendently transfigured, will take its rightful place and have something to give those poor men and women who will have been liberated once and for all." It certainly makes is sound like animals can expect to wind up in heaven, too, given the whole "each creature" language.

And as if that weren't enough, in his closing prayer in the encyclical, Pope Francis writes, "Teach us to discover the worth of each thing, to be filled with awe and contemplation, to recognize that we are profoundly united with every creatures we journey towards your infinite light."

The wording might not be explicit, but it does seem pretty clear, and best of all, it's in an encyclical, which makes it official Catholic doctrine.

So it seems like all dogs really do go to heaven, meaning the Vatican only needed 26 years to catch up to Hollywood. And more importantly meaning that we can all look forward to having our pets around in the the kingdom of heaven. Which is good, because what good is an afterlife where you are missing out on this kind of cuteness?

That's assuming, of course, that we all are going to make it to heaven ourselves. And actually, considering that all the dogs I've had in my life are much more kind, generous, patient, and generally sweet than I am, I suppose they might have a better chance of making it past St. Peter than I do.

But as far as I'm concerned, they all deserve to be there. So it's nice to have some official notice from God's representative on Earth that they might get the chance.

More like this
5 Ways To Stand In Solidarity With Women In America From The UK
By Sophie McEvoy
How To Fight For Reproductive Rights, Based On How Much Time You Have
By Courtney Young
This Wi-Fi-Enabled Pet Feeder & Camera Gave Me Peace Of Mind On An Overnight Trip
By Danielle Calma
This Dog Food Is Not Only Super Healthy For Your Pup, It’s Also Better For The Planet
By A. Graham
Get Even More From Bustle — Sign Up For The Newsletter