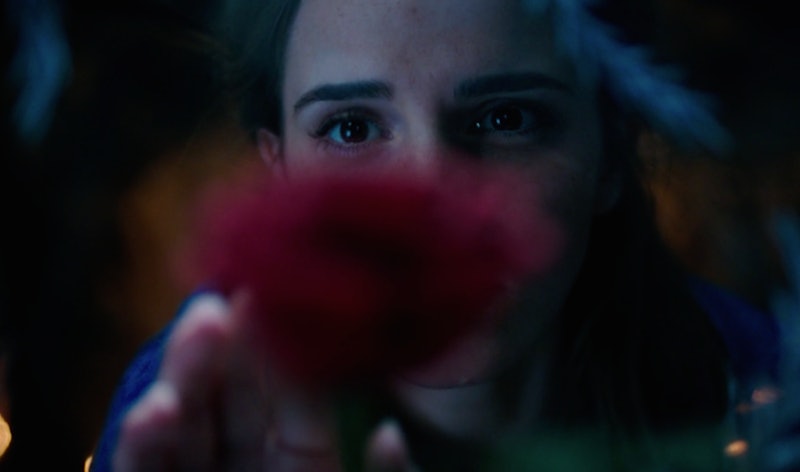 If the world can agree on nothing else, at least everyone can agree Beauty and the Beast is still Disney's best princess movie. It's no secret that anticipation for the live-action version of the tale as old as time was high, but no one knew just how high until the official Beauty and the Beast trailer became the most watched trailer in a 24-hour time period (and that's not even counting the views from China). All those times you hit replay to swoon over the Beast jumping in to protect Belle from the wolves definitely paid off for the upcoming blockbuster. They also helped Beauty and the Beast snatch the trailer view record away from a surprising movie.

The Guardian reported Beauty and the Beast drew in 127.6 million trailer views in a single day, smashing the previous record set by Fifty Shades Darker and its 114 million views. In the battle of Belle versus Anastasia Steele, Belle won — no contest. The lesson here is to never underestimate the power of nostalgia, even when your trailer includes scenes of a smoldering hot Jamie Dornan. Even the rebellion was no match for Belle and the Beast, the movie's previously released teaser trailer demolished the record set by Star Wars: The Force Awakens ' teaser back in May.

Disney should be happy to know that everyone wants to see Beauty and the Beast. No, seriously, I mean everyone. I'm pretty sure just reading about the glorious trailer has made you want to watch it again, so go ahead and check it out below. There is no such thing as too much Belle.

To be fair, the title of most watched trailer has been passed around quite a bit lately. Before Fifty Shades Darker, Rogue One: A Star Wars Story briefly had the honor of setting the most watched record. The news is still worth celebrating, though. Disney is slowly remaking its most famous films into live-action outings, but so far none of them have garnered the level of excitement as Beauty and the Beast.

Beauty and the Beast has always been special. The 1991 original was the first animated movie to ever be nominated for Best Picture at the Oscars, so Beauty and the Beast is used to defying expectations. The story of Belle trading places with her aging father and reminding the Beast there is goodness in humanity resonates with viewers of all ages. Whether you fell in love with the animated movie as a child, or have simply always believed it was one of the greatest love stories ever made, your anticipation levels for the live-action version starring Emma Watson and Dan Stevens have to be off the charts. Knowing Watson is playing Belle is reason enough to get psyched, everything else is a bonus.

Fifty Shades Darker certainly has an audience it speaks to, but it simply cannot compete with Belle and her Beast. (And Chip!) Beauty and the Beast premieres in theaters March 17, 2017.