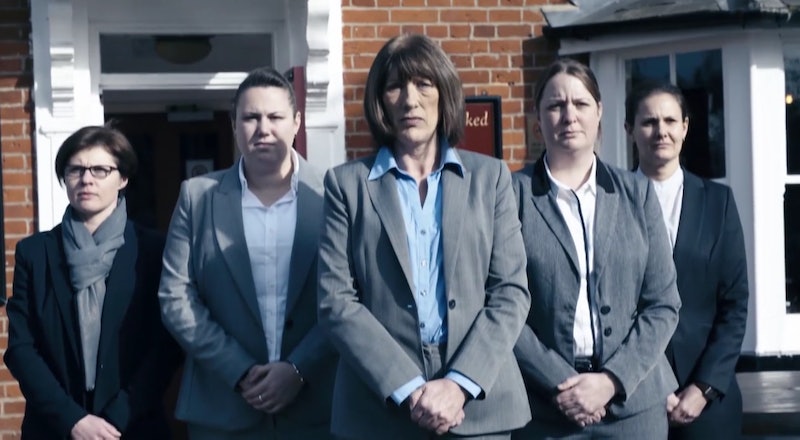 She's not a hacker or an internet troll, but if a star has a sex tape or an affair in their past, Jacquie Davis will find it — if she's hired to, that is. Davis, one of the subjects of the documentary Bodyguards: Secret Lives From The Watchtower, in theaters Dec. 2, is one of the comparatively few women to own a thriving personal security business. Davis and her team have protected royal families from the Middle East, CEOs of Fortune 500 companies, and A-Listers like Diana Ross, Liza Minnelli, and J.K. Rowling. Part of their job, Davis tells Bustle in an interview, is to uncover as many relevant details as possible about their principals (a.k.a. the people they're protecting), even if those principals aren't offering that information. "Principals don't always tell you everything, but we find it out," Davis says. "And it can be embarrassing or whatever, but we're not there to judge them. We're there to keep them alive."

Davis came to the close protection field after serving as an officer for London's Metropolitan police. She began training for her second career in the '80s, a time in which Davis remembers there were "no women" in the field — in great contrast to now, thanks in part to her own work. Once Davis entered the field, she realized that her gender could be a tremendous asset in security. For one thing, some of the foreign dignitaries she's worked for require all female security for their female principals for cultural reasons, she explains.

And her gender has come in handy in other ways, too. Davis found early on in her career that the job required of her is an intimate one, as bodyguards are embedded into every aspect of the lives of the people they're protecting. "You do find with a lot of your principals that you do become mother, confessor, and quite often, you're a shoulder to cry on as well," Davis explains. "And we do understand what [female principals] go through. Women the world over go through the same problems, don't they?" It's an advantage for female security to be able to raise "the comfort level" for the people in their care, she says. Explains Davis, "Women are natural protectors and nurturers, aren't they?" Davis has even gone on to encourage other women to take on bodyguard jobs, recalling how, early on, she went "banging on" to women she knew who were moving on from the military and police to encourage them to look into personal security.

Still, not too many women take on the job. According to 2015 data from the licensing body Security Industry Authority, only 9 percent of the organization's licensees are women. But for clients, hiring a female bodyguard adds an element of personnel camouflage. Davis doesn't fit the physical profile of the mountainous security guard you'd see in a concert pit. She and the women who work in her field can do their jobs without immediately standing out as close protection operatives. The camouflage can be of benefit to a principal who wants to travel discreetly. "We have a lot of male principals who like to have female CP because we look like the secretary or the wife or the mistress as opposed to the bodyguard," Davis explains.

But "the wife" is just a uniform — another part of the work that makes these women seem more like secret agents than security staff. If Davis or her employees have to throw down, no one will confuse them with secretaries. Davis is dismissive of the immense size and brute force that some might think are credential enough to make a man a successful bodyguard. "Our upper-body strength is not that of the guys, there's no denying that," Davis says. "But with training, we can put a six-foot, 350-pound bloke on the floor, easy as anything."

The physical protection is just half of the job anyway. Davis's firm includes a crack intelligence team, whose job is to know more about its principals than they do about themselves. The research piece of a detail is "huge," Davis tells Bustle. "You have to know their blood group, their allergies, their medications. We have to find out are they on a hit list, is it a political hit list, are they being blackmailed, are they being stalked?" she explains. "You always like to know who the enemy is of course." Davis takes obvious pride in their thoroughness, and emphasizes that this level of care and professionalism is the main difference between hired day security and a close protection detail.

And because Davis doesn't cut corners, she finds protecting world-traveling CEOs easier than celebrities. Her team does checks on every person they know that their principal will encounter. For celebrities, that number is usually higher and the list incomplete. Actors and other creative types also have different emotional needs than other clients, and their egos can impede Davis's work, she says. "Most celebrities that I know, they're quite fragile. And some of them, of course, they live in a bubble," she explains. "So they don't always understand the outside world." But, she's quick to add, "They're usually very good at doing what you ask them to do."

When I ask Davis about facing sexism in her work today, she's very clear that she abides no such thing. "When I first started it was huge," she says. "But now I own my own company and the guys work for me, so that's quite nice." Is it any surprise that a woman who walks into life-threatening situations every day and tells royalty what to do has busted through a few glass ceilings? "There is sexism, but they have to get over it," Davis says. "Get over it or get out, is our attitude."

The rise of Davis and others like her in this male-dominated field should inspire working women everywhere.