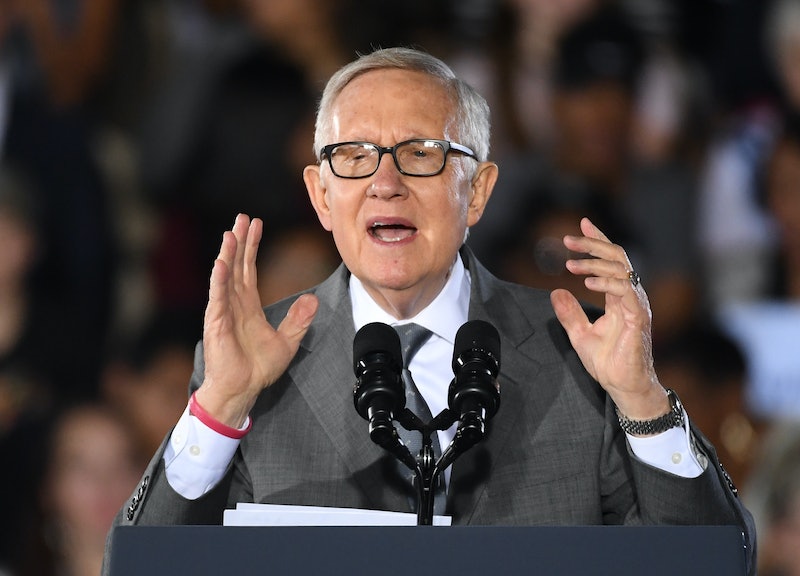 Since Donald Trump won the presidential election (though not the popular vote), there have been 437 reports of "hateful intimidation and harassment," according to the Southern Poverty Law Center. The plurality of which were anti-immigrant, while Trump's win was met with joy in white nationalist circles. This is not normal. This is not what would have happened if Mitt Romney or John McCain won their elections, yet I believe too many Democratic politicians are treating it as such. From my perspective, only Nevada Sen. Harry Reid has attacked Trump with true ire in the days since the election, and only Sen. Reid is reacting to this election in a logical way.

On Friday, his office released a statement about Trump's presidential win, and it did not mince words:

If this is going to be a time of healing, we must first put the responsibility for healing where it belongs: at the feet of Donald Trump, a sexual predator who lost the popular vote and fueled his campaign with bigotry and hate. Winning the electoral college does not absolve Trump of the grave sins he committed against millions of Americans.

It may be easier for Reid to be open about righteous anger than for other politicians, since he's retiring at the end of his current term, but in my mind, it's still an insufficient excuse for the repeated calls for unity by Democrats, which I believe in their own way normalize the reality of a Trump presidency.

Maybe Democrats thought they were giving Trump a chance to roll back some of his more extreme and frightening campaign promises, but I believe he has already made it abundantly clear that he has no interest in being a moderate president.

On Sunday, Trump announced the appointment of former Breitbart News chairman Steve Bannon as chief White House strategist, a man whose previous work and statements are so divisive that the New York Times editorial board called him "Steve 'Turn On the Hate' Bannon." Bannon has been accused of being a white nationalist by multiple publications and people, including House Minority Leader Nancy Pelosi. While the Trump campaign has denied and downplayed this characterization of Bannon, there is evidence that white supremacist groups are thrilled with his addition to Trump's team.

Few reactions to such an announcement could be more reasonable than Reid's: abject horror. Reid immediately called on Trump to fire Bannon:

As long as a champion of racial division is a step away from the Oval Office it will be impossible to take Trump's efforts to heal the nation seriously.

While office-holding Democrats may balk at publicly criticizing the president, with whom they ostensibly need to cooperate in order to accomplish almost anything, I prefer the route that Reid is taking: making the most of his position by saying, loudly, what so many Americans are thinking.