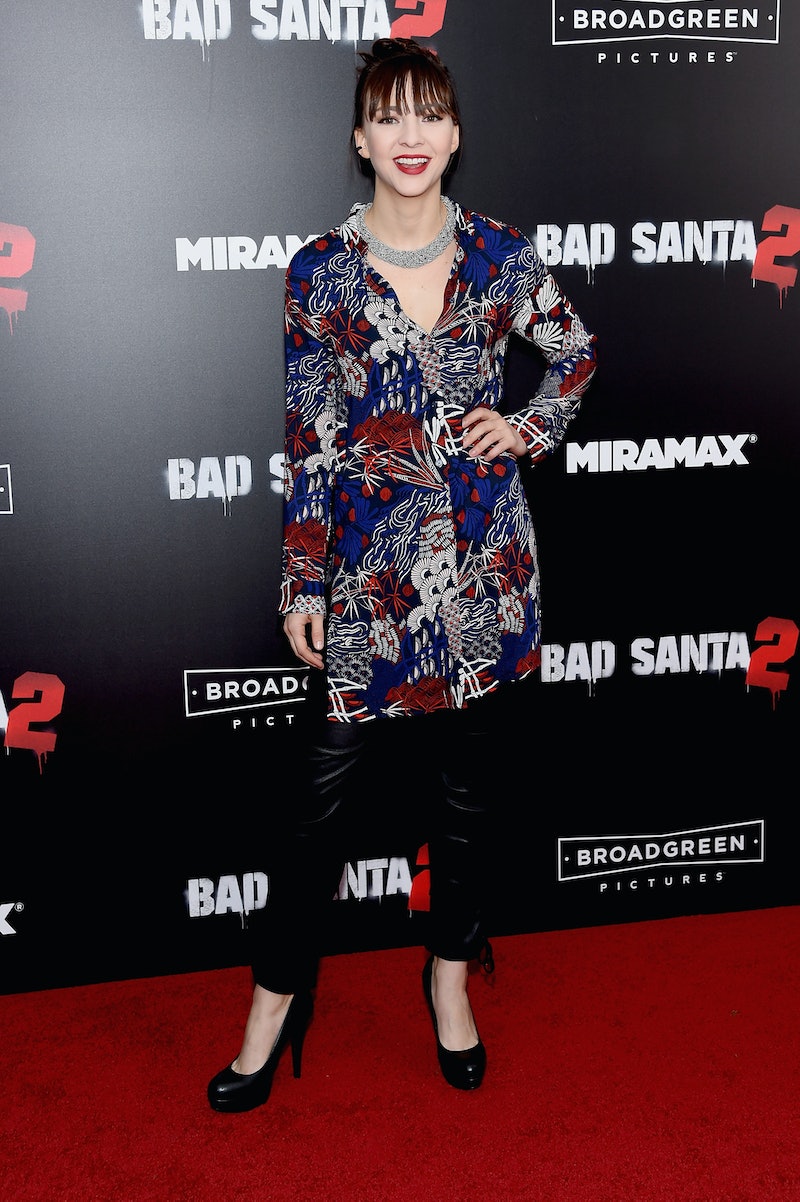 The fight for gender equality in the workplace is an ongoing battle and has been for decades. One of Amazon's newest series, Good Girls Revolt, draws attention to the history of this fight and the effect it had on women during the revolutionary '60s and '70s by portraying a fictional retelling of the lives of real female researchers at Newsweek during 1969. These women — who were not allowed to write or report for the magazine — often did the majority of the research and work for the publication, while their male coworkers received all of the credit. And while some of the show's issues might feel dated to current viewers, the series' central focus on the relationships shared between these ladies and their decisions to work together to fight discrimination is just as relevant today, says star Erin Darke.

"I think the theme of a community of women and the idea that we're all in this together is so important, particularly right now," Darke told Bustle at the premiere of her new film, Bad Santa 2. "I think there has been a sense of competition that has been bred into women via the patriarchy for a lot of years, and I came out of the show being so inspired by the power that people and women, in particular, have when they join together."

In the show, Darke stars as Cindy Reston, a soft-spoken researcher at News of the Week who begins to question her role in the workplace once her female coworkers show her that women are more than just background characters. Good Girls Revolt sees each leading character having her own personal story of growth and change, and for Darke, the character of Cindy is relatable for many working women and young viewers who may feel out of place or powerless in the workplace.

"I think Cindy showcases a woman who is learning to have faith in herself," Darke explained at the premiere. "The idea that we deserve success and we deserve happiness is something that's really hard to learn. And, the beautiful thing about Cindy is that you get to watch her learn that about herself in the show."

As they watch the show, perhaps viewers of Good Girls Revolt can grow alongside Cindy and find a way to voice their opinions on matters relevant in today's society such as the gendered wage gap, Darke hopes. The show shines a light on how similar the process of sparking change in the workplace is between then and now, despite the difference in decades, and the fact that there are so many similarities within the fight for equality over time reminds us all of why we must continue to pursue change.

"I think [the show] is a beautiful window into a time young people might not really be aware of because it's so far before them," Darke said. "I think this fight that these women went through within the '60s and the '70s is something that we need to remember and start to do again."

For many young women in the past and today, having the support of those around you can have a huge influence on self-esteem, self-worth, and instilling the desire to create change in one's self and the world around you. And perhaps seeing it on-screen in shows like Good Girls Revolt can have the same kind of impact.

More like this
'Heartstopper's Kit Connor Called Out Twitter For Making Assumptions About His Sexuality
By Nola Ojomu
Lydia Leonard Is Setting The Record Straight
By Olivia-Anne Cleary
Simply Sayo Doesn’t Consider Kpoetry Hard Work
By Jessica Morgan
Sandra Bullock, Girlboss Extraordinaire
By Matt Harkins & Viviana Olen
Get Even More From Bustle — Sign Up For The Newsletter