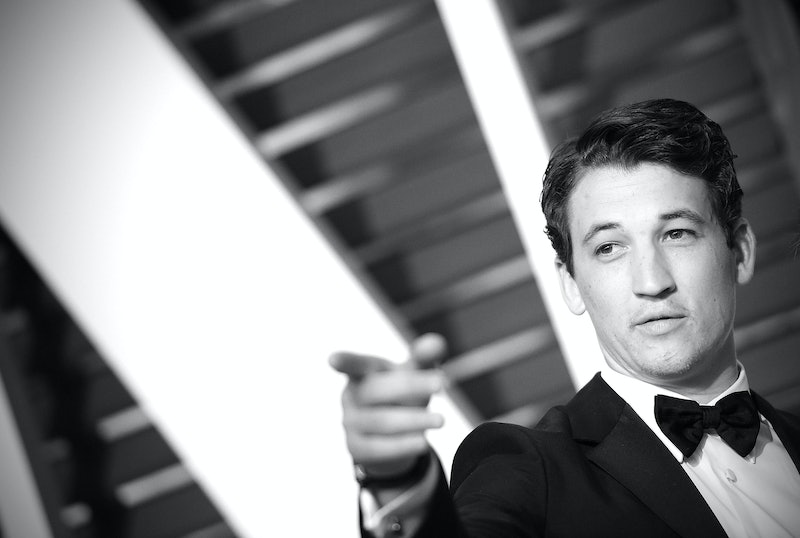 If there are two things the moving new film Bleed for This is not short of, it’s inspiration and good ol’ fashioned testosterone. Miles Teller puts on a brilliant portrayal of real-life boxer Vinny "The Pazmanian Devil" Pazienza in a story the actor calls “the greatest comeback in sports.” You don’t have to be a sports fan to appreciate it, though. The true story chronicles Pazienza’s early life, when a near-death car accident leaves him with a broken neck and possible paralysis. But he refuses to believe his capabilities are limited. By getting a trainer (Aaron Eckhart) and going against his doctor’s wishes, he’s back in the ring a year later because risking his life is worth one last fight. Teller, who says his mental and physical limits were tested throughout the entire shooting process, explains how the film makes him rethink his life and will cause others to do so as well — regardless of gender or feelings about boxing.

“I don’t think it’s for men or women, I think it’s just a movie about somebody who refused to listen to the word no, somebody who overcame obstacles,” Teller says. Thus, it’s not just a boxing movie, but one about defying the odds, pushing personal boundaries, and rising above.

“When he was told something was impossible, he didn’t listen to it,” says the 29-year-old. The actor understands how women could not only relate to Pazienza’s story, but be inspired by it. “I’m sure there’s a lot of women who felt like put in a box or like something was unattainable for whatever reason,” says Teller. “I got two sisters, so I think it’s a movie for all sexes.”

For Teller, the story particularly strikes a chord because of Pazienza’s powerful qualities. “[It] echoes a lot of characteristics and attributes that I hold dear — perseverance, strength, determination,” he says. And while explaining the mental and physical commitment it took to succeed in playing the boxer, I see how Teller carries these qualities himself.

The process seems grueling. “I did not eat anything that tasted good. I did not drink, I did not eat bread for about eight months,” says the actor. “I lost 20 pounds, got to six-percent body fat, and then I had to gain 15 pounds during filming to jump weight classes.”

But as diligent as he is about his craft, he’s not sure he would risk his life to continue his love of performing, as Pazienza did. “He risked paralysis… Just because he loved this thing so much,” says Teller. “If you were to ask me, ‘Miles, would you still act if you had to choose between walking again or acting?,’ I don’t honestly know if I could pick,” he says.

The movie makes audiences think: Would you risk your life for your greatest passion? “Vinny’s a once-in-a-lifetime person and it just so happened he was a boxer,” says Teller. Either way, the film is sure to light a fire within all who watch it.

Bleed for This premieres November 18th.