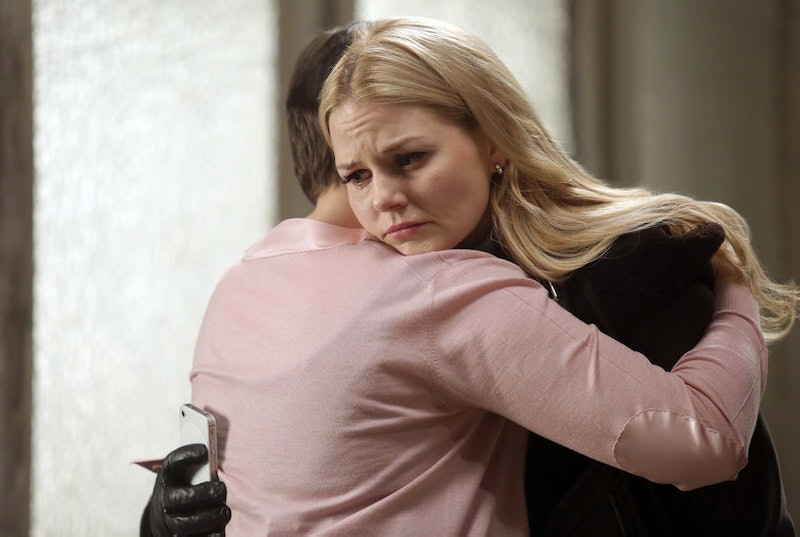 Let's be honest. You sort of had to be a hardcore fan of Neal Cassidy or Michael Raymond James to care one way or another about his character on Once Upon a Time. Neal, also known as Baelfire or by the fandom moniker Nealfire, is the cornerstone of the story and the entire driving factor behind the plot that led us all to episode one, but, from the moment that Edward Kitsis and Adam Horowitz announced that a series regular would be killed off, Neal was one of the top contenders for that honor. His death on Sunday night's episode of Once Upon a Time was a lot like watching someone run into the path of an oncoming car: even though you knew what was going to happen, you couldn't look away and it still came as a punch in the gut.

Neal marks the second time Emma has had a potential true love die in her arms. She was left clinging to Neal as he gave a heartfelt speech to his devastated father and died with his eyes wide open. Although Neal's usefulness as a character was more or less reduced from Season 2 to Season 3 as a point on a love triangle few fans thought he was going to win, he did have a lot of great moments as a walking plot point leading up to one of the saddest death scenes in Once Upon a Time history.

Telling off the Dark One

Neal — then Baelfire — gets bonus points for the fact that he wasn't even in his teens when he did it. Rumplestiltskin may may have become the Dark One to protect his son and ensure that no one could push their family around again, but it didn't take long for him to get drunk on power and become the antithesis of everything he had been before. Baelfire loved him anyway and stood by him even when he lost all of his friends and couldn't walk through town without everyone shying away in fear, but his quest to find a way to separate his father from the powers of the Dark One eventually drove them apart. Literally. Baelfire opened a portal to another world and when his father refused to take his hand and go with him he screamed out "COWARD!" as he disappeared. Little Boy - 1. Dark One - 0.

At some point in his very long personal history, Neal ran into a teenage Emma Swan when they both tried to steal the same yellow Bug. If your response to some admittedly attractive street punk cropping up in your backseat and talking to you isn't to scream, swerve, and accidentally kill you both, then you are not Emma Swan. The two fell in love and became petty criminals until that same love prompted Neal to want a better life for Emma and for himself — one they could build together. Thanks to his fairytale past, that ended about as well as his relationship with his father did, except this time Emma was the one left feeling betrayed. And pregnant.

Reuniting with his New Family

Emma was still carrying that betrayal years later when she went with Rumplestiltskin to Manhattan in order to retrieve his son, only to find out that the mysterious Baelfire was none other than Henry's father. She did not take this well. Neither did Henry, when he found out that his deceased father the "brave firefighter" was neither deceased nor a firefighter. And while Neal was eager to get to know the son he'd never known he had, Emma was just as eager to keep him away from Henry — not for Henry's own good, but for the good of her own heart.

Reconciling with his Old Family

Being stuck in Storybrooke — and later trapped in Neverland — with the man who abandoned him wasn't good for Neal's temper. Rumplestiltskin manipulated, lied, cheated, murdered, and committed many other atrocities in order to get back to his son and Neal made it very clear that a reconciliation was too little, too late. Neal didn't truly forgive his father until Rumplestiltskin proved himself willing to sacrifice his own life to protect that of Neal's son. And maybe it's because he was born in the Enchanted Forest, but, for a man who has since seen at least one Disney movie since he left, Neal took the fact that his father was dating Belle from Beauty and the Beast a lot better than could be expected. By the time we see them in their first main subplot after Rumplestiltskin's death, they have bonded together into the most effective rescue (well, resurrection) team with all the tragic results you'd expect from that line of work.