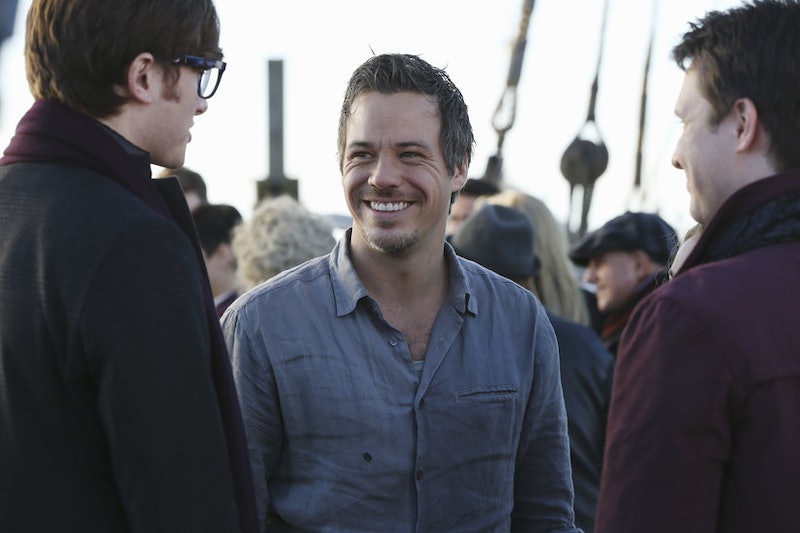 If you haven't seen Sunday night's Once Upon A Time, I'm sorry that you read this headline and now it's ruined for you. But, spoilers aside, we must mourn the death of a fan-favorite character the was killed off the series during "Quiet Minds." Last week, we proved that everyone should be terrified of the Wicked Witch — and now that she's made her first kill, Storybrooke's inhabitants are catching on. Neal/Baelfire, son of Rumpelstiltskin and father of Henry, bit the dust on Sunday night — but even though we're sad about it and 'shippers all over the world are panicking, it happened in the right way.

We knew this was coming — a few months ago, Edward Kitsis and Adam Horowitz revealed that they'd be killing off a series regular "for real" during the second half of Season 3. But who really thought it'd be Neal? He'd come so far and he was Henry's real father so he at least seemed kind of safe — especially under the cover of Henri Lubatti's premiere as Lumiere on Sunday night — right? We definitely won't be underestimating OUAT's ability to be ruthless in the future. So, unfortunately, the series regular that Kitsis and Horowitz spoke of was Neal Cassidy/Baelfire and what's even more unfortunate is that we know for a fact that he's gone for good. Where's my box of tissues?

We're heartbroken — because, duh — but we can't deny that OUAT did this in the right way. Neal passed on nobly and with Emma by his side, both of which were fitting. He also got to say a final, touching goodbye to Hook, the man who saved him from being trapped in Neverland forever and by extension, allowed him to meet Emma and fall in love and all that great, fairytale stuff. So here's what went down — during the "missing year" in the Enchanted Forest, Neal and Belle were guided (more like manipulated) by Lumiere to a key that would return Rumpel to life. (Am I the only one that realizes that resurrecting a Dark One sounds like a terrible idea, even if he is your dad?) So, they go to the origin hellmouth of the Dark One and because all magic comes with a price — Neal ends up inadvertently sacrificing himself so that his family could be together.

Upon returning to the Forest, Neal's only goal was to reunite with Emma and Henry – and to do that, he thought he needed to resurrect his father. But he also wanted his family to be whole, so aside from needing Rumpel's help to return to Storybrooke, he also just wanted the father that he spent years running from to be alive again. Which is really sweet and a noble sacrifice. So he plunged that bizarre looking key and opened the Dark One's hellmouth and Rumpel materialized from essentially what looked like tar right before his eyes while he sacrificed his life. Now we all know why he was impossible to find to Storybrooke — but now onto why you should be okay with this.

Neal succeeded in his quest — albeit being ill-informed about it's stakes. He reunited his family and by extension gave Emma the tool to revealing the Witch's true identity — which saved Mary Margaret and David. Neal gave his life so that the rest of his family could live and in that, OUAT fans should take comfort because this show is all about the sacrifices we make (or don't make) for family. And how those choices effect each and every one of us and inform how we, in turn, choose to live our lives. The time for Neal's sacrifice came and he accepted it gracefully and courageously because he might have been a jerk, but he loved Emma and Henry and doing what was best for them was his only choice.

Neal didn't get to see Henry one, last time — which is sad — but in the moments before his death, he managed to convince Emma that Henry might be better off having his memories. Sure, they were doing great in New York, but they were alone — and even though Emma was content with that in the past, she has a family now and Henry deserves to have the same. So, his death didn't come in vain and it's not that anyone will be better off without him, but they certainly have a better chance because of his sacrifice. If a character has to die, at the very least it's a comfort to know that they changed the game for the better.