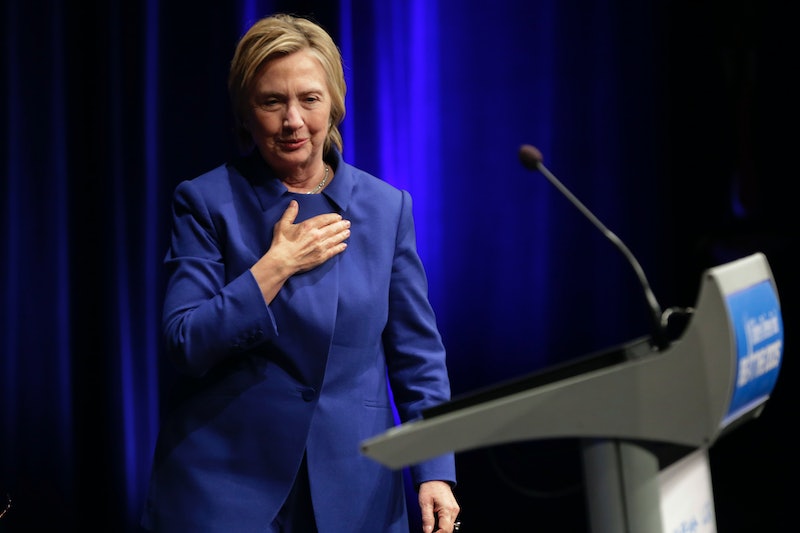 It can be hard to come back into the public eye following a great disappointment, but one former presidential candidate managed to make an appearance in a purposeful way. In her first public speech since the election, Hillary Clinton spoke at a Children's Defense Fund gala and reminded the nation that "America is worth it."

After finishing law school, Clinton was an intern at the Children's Defense Fund, a nonprofit focused on child advocacy and research — and she has continued to be involved with it to this day. Each year, the organization hosts a "Beat the Odds Celebration," which serves to highlight five scholarship winners; this year, the nonprofit also honored Clinton for "a lifetime of service."

During her speech, Clinton said being there was especially "poignant and meaningful" because she had attended the same event with her husband Bill after he had been elected president. Despite expressing disappointment with the election results, Clinton focused on the big picture. "Our campaign was never about one person or even one election," she said. "It was about the country we love and about building an America that is hopeful, inclusive, and big-hearted."

Clinton's message of hope could be seen when she individually congratulated this year's five scholars. Each of them faced tremendous hardships, she said, but still managed to overcome the odds to excel, both academically and in giving back to their communities. "They never stopped reaching, they never stopped dreaming, and yes they have beaten the odds," Clinton said. "These fearless, generous, open-hearted, determined young people represent a rising generation that should give us all hope for the future."

The former secretary of state also had a call to action for Americans: organizations like the Children's Defense Fund require volunteers and funding to continue to function. Referencing the election results, Clinton borrowed a quote from Marian Wright Edelman, founder of the Children's Defense Fund and her longtime mentor: "...service is the rent we pay for living. Well, you don't get to stop paying rent just because things don't go your way."

Clinton's message is especially meaningful now that Donald Trump has won the presidency; as president, Trump would have the power to turn some of his campaign promises into reality. This is troubling considering that Trump has made discriminatory statements in the past, such as about banning Muslims from the country (which has since been removed from his website) and that women should be punished for having abortions (he later said he "misspoke"). It is at this crucial time that Americans should band together to stand up for their rights and the rights of others. And this can't be done without being politically involved and supporting organizations that do nonprofit work.

Clinton acknowledged that the United States has revealed how deeply divided it is on some fronts through the election. But she had a message for her audience: "America is worth it. Our children are worth it. Believe in our country, fight for our values, and never, ever give up..."