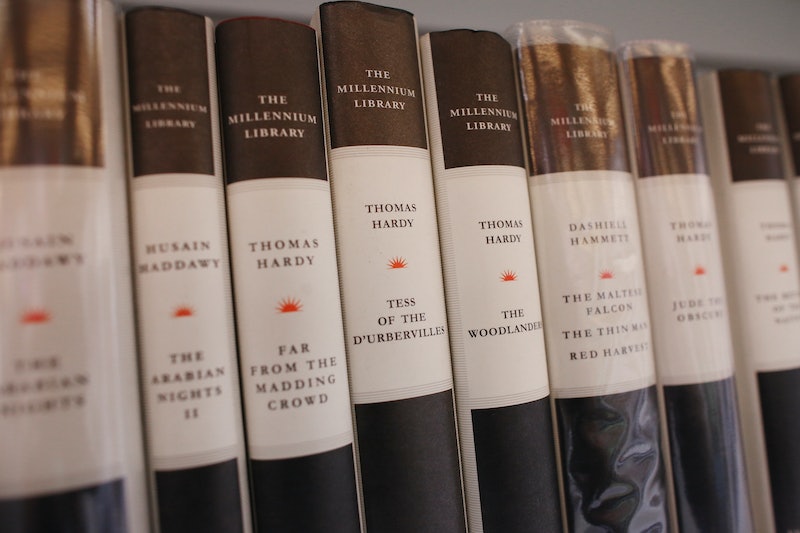 With the recent success of Danielle Paige's The Wonderful Wizard of Oz adaptation Dorothy Must Die, YA retelling of classic works of literature have jumped on the market radar. April also saw the release of Great, comedian Sara Benincasa's gender-bending adaption of The Great Gatsby, and in Maay, Alyssa B. Sheinmel's oceanside story Second Star, gives us the story of Peter Pan through a modern 17-year-old Wendy's eyes.

Though it seems like the YA community is now buzzing with these books, it's certainly not a new trend. Even aside from fairy tales, many classic works of literature are being modernized. Some are told by the same protagonist, and some switch the viewpoint to a secondary character. It's no surprise that William Shakespeare has been ripe for restaging, but other authors unexpected authors have also found their way into YA.

The Bard has given the world many opportunities to make his stories our own. There were so many examples of Shakespeare retellings that it was difficult to choose just a few, but these four show the range of adaptions out in the market today. And even greater? They're all retold from a female point of view.

Romeo, Romeo, your story is primed for adaptation. There are dozens of Romeo & Juliet revamps on bookshelves, but Stacy Jay's 2011 Juliet Immortal has proved to be one of the most interesting. For those of you who just don't buy the tragic love story angle, this book is for you. In Juliet Immortal, Romeo is not Juliet's soulmate, but her enemy.

In Lesley Livingston's Tempestuous, Shakespeare's enchanted island magician's daughter Miranda is transported to high school, where she is exiled from the popular girl social circle. But after a winter storm (*cough* tempest *cough*) snows her in at the local mall, where she and a group of misfits work at a hot dog stand, Miranda plans revenge on the girls who wronged her.

This isn't the first modern Twelfth Night adaptation — the hilarious and wholly under-appreciated She's the Man, a movie starring Amanda Bynes, springs to mind — but Celia Rees' The Fools Girl keeps the tale in Elizabethan England, and Shakespeare himself is a character.

YA adaptations of Jane Austen and the Brontë Sisters

The works of these English poets and novelists are mainstays in high schools and most grown women's bookshelves, so creating acceptable adaptations is tough — but that doesn't mean the brave haven't tried. (And to not leave out Ann, let's all band together to find an adaptation of The Tenant of Wildfell Hall.)

Contemporary San Francisco stands in for the lonely moorlands of Wuthering Heights in Brian James' The Heights, but don't be fooled. Catherine and Heathcliff, now Henry, aren't some happy-go-lucky urbanites. The Heights is jam packed with the same gut-wrenching themes of destructive love, class, power, and revenge.

April Lindner has made a career out of modernizing some of our favorite classic novel heroines. Jane tells the story of Jane Eyre much the same, but she updates many of the elements. Now Jane is a college drop-out nanny who takes up a forbidden romance with the children's father. Linder also wrote Catherine, a retelling of Wuthering Heights, and next year's Love Lucy , an adaptation of E.M. Forrester's A Room with a View.

There are loads of Pride and Prejudice retellings in pop culture (Bridget Jones's Diary, the book and the movie, for one), but Diana Peterfreund takes on another of Austen's famous works, Persuasion. Except in For Darkness Shows the Stars , readers are transported to the future, where a genetic experiment has decimated humanity.

Other classic YA retellings

It could be me, but the creepy story of the forever-child and his stalking tendencies is ripe for some eerie adaptations. There are a few on the market, including The Child Thief , but Jodi Lynn Anderson takes an entirely different track, focusing instead on one of the only women to populate Neverland, Tiger Lily. In Tiger Lily, Peter Pan and Lily are lovers whose romance is threatened by the the arrival of Wendy Darling. Come on, Tiger Lily, you can do better.

The 1930s YA novel Rebecca gets a modern spin in Paige Harbison's New Girl . Fans of the original will find that the two stories follow very close plot lines, but in Harbison's version the title character is a "mean girl" type in Manderley Academy, where she and the unnamed title character go to school.

You can finally show everyone you were right, Frankenstein is the doctor not the monster when you read This Dark Endeavor. Kenneth Oppel's novel is a prequel of sorts to Mary Shelley's classic gothic tale. Victor and Konrad Frankenstein are inseparable twin brothers before things go horribly, horribly wrong.

The Merry Adventures of Robin Hood by Howard Pyle

Titular character Scarlet poses as a boy to join Robin Hood's merry band of thieves in A.C. Gaughen's novel. The story, as a result, gets a much needed boost of estrogen as Scarlet tries to outwit the Sheriff of Nottingham while remaining fiercely loyal to Robin Hood and above all, her cause.

We can all more easily pretend to have read Moby-Dick with the adaptation Railsea. This re-imagination of Melville's classic work changes the ocean to the railways and the white whale to a giant mole.

Who knew that a famous novel about saving people from the guillotine during the French revolution could be transformed into a YA novel set in a rich private school? But Aprilynne Pike does just that in her hilarious The Scarlet Pimpernel adaptation, Life After Theft.

The Masque of the Red Death by Edgar Allan Poe

Edgar Allan Poe, the king of gothic literature and the man with the best statue ever, is given a feminine twist by Bethany Griffin. In Masque of the Red Death and Dance of the Red Death , Griffin takes on Poe's metaphorical story of the plague infiltrating a party, but she expands the world around the central character, Araby Worth.

The Iliad by Homer

Almost no work of classic literature remains untouched by retellings, even an ancient Greek epic poem. Homer's The Illiad, the story of Trojan War made most famous by Brad Pitt's Troy (kidding) tells the well-trod tale of Helen of Troy and her beautiful face that launched a thousand ships, but it focuses mostly on Agamemnon, Paris, and the other men around her. Josephine Angelini's Starcrossed , puts Helen front and center, but instead of Troy, she inhabits the Massachusetts island Nantucket. Little does she know, the fates are destined to replay the fateful story of the war over and over throughout history, and she has been picked as the instigator.