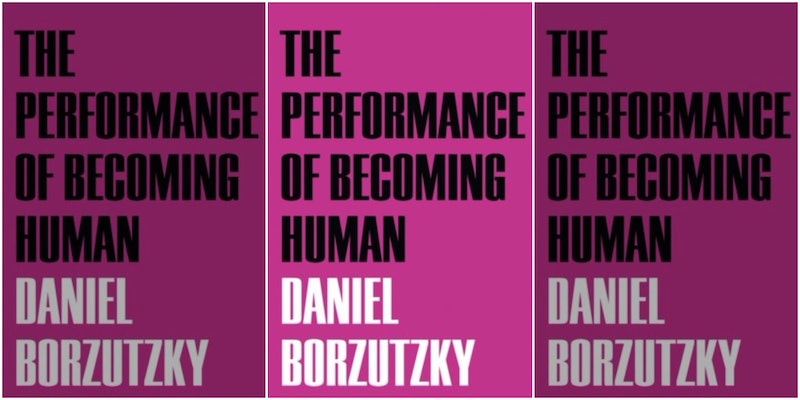 The political reigns supreme at the 67th National Book Awards ceremony, where Chilean-American writer Daniel Borzutzky's The Performance of Becoming Human was just awarded the National Book Award in Poetry. Released by Brooklyn Arts Press, The Performance of Becoming Human is Borzutzky's third full-length volume of poetry; he's also published a collection of fiction, a couple chapbooks, and three books of translation, too. Originally from Pittsburgh, Borzutzky lives in — and frequently writes about — Chicago.

Larry Wilmore certainly set the tone for what has been a fraught National Book Awards ceremony, one that refuses to shy away from the political climate in which we're now living — and, presumably, writing and reading. Given the emcees' interest in keeping things political, Borzutzky's book is a perfect choice. Urayoán Noel said of The Performance of Becoming Human:

“In this canticle for the age of listicles, Daniel Borzutzky performs a new political poetry in the crucible of “overdevelopment,” when “The city has disappeared into the privatized cellar of humanity.” Here, the socially engaged bro-poet is mercifully broken, relieved of his epic monumentality, and with it of a range of foundational fictions (nation/family/language/subject), leaving behind these gut-cantos (songs/fragments), detestimonios of a spectral self, at once buzz-fed and cankerously/cantankerously embodied. (You can’t spell “Neruda” without “nerd” and Canto General never rocked “The Gross and Borderless Body.”) The ugly majesty of these prose blocks echoes the windswept expanses of neoliberal Chile and Chicago, their dead and their debt, their surrender and struggle. To read “this book that is a country deposited not in your heart but in your mouth” is to confront becoming human as speech act, as language game, and to know the freedom and the terror of doing so. The painbeauty of Borzutzky’s virtuoso, multi-register flow (abject punchlines included) is also a counter-flow to the death drive of capital, sentences for a radical sentience.”

The Performance of Becoming Human by Daniel Borzutzky, $17.09, Amazon

Ready to meet this year's poet of the moment? Check out these 7 quotes from Daniel Borzutzky and get ready to be floored by his books.

— from "Lake Michigan Merges Into The Bay Of Valparaiso, Chile"

2. "And towards the end of the book, where the flesh from the man's back twists into birds and stars and butterflies and faces with thick lips and empty eyes, there is a story that flesh readers call memory: here the flesh words tell of a man who falls out of an airplane, and when his bones splatter each shard of bone forms a country, and in each country there are men who have been destroyed but who have now been reconstructed as walking pieces of flesh formed into the former bodies they once possessed. The flesh men live in the bones and all day they cry for their loves, the loves they left behind, the loves who were forced to push them out of the airplanes by the bigger men with guns so that their last image of life, their last gasp of life, their last snatch of life would be death at the hands of those they love: this is memory as it is written in the Book of Flesh."

— from "The Book of Equality"

4. "This poem is firm in its convictions and compassionate at the same time./This people-poem, not a political poem./This poem is committed to public service./This poem is simple, unobtrusive, and easy to use or ignore as the reader sees fit."

5. "and the bills are life or they are evaporating/and they throw fresh bills at us when we speak or they beat us and take away our bodies/it is private, mystical money"

— from "Illinois" from In the Murmurs of the Rotten Carcass Economy

6. "...This poem is not capable of deception or transcendence. Additionally, this poem is perfect for the occasion of being strapped against your will to a fence or gurney, electrocuted, or for having your face shoved in excrement. This is a contemporary poem. This poem allows you to be young, and to shake and move with the times."

7. "Do you remember school bells and cowards and the boys who would come to our yard to eat the scraps of food we threw to them before the city started to blaze?"

The Performance of Becoming Human by Daniel Borzutzky, $17.09, Amazon