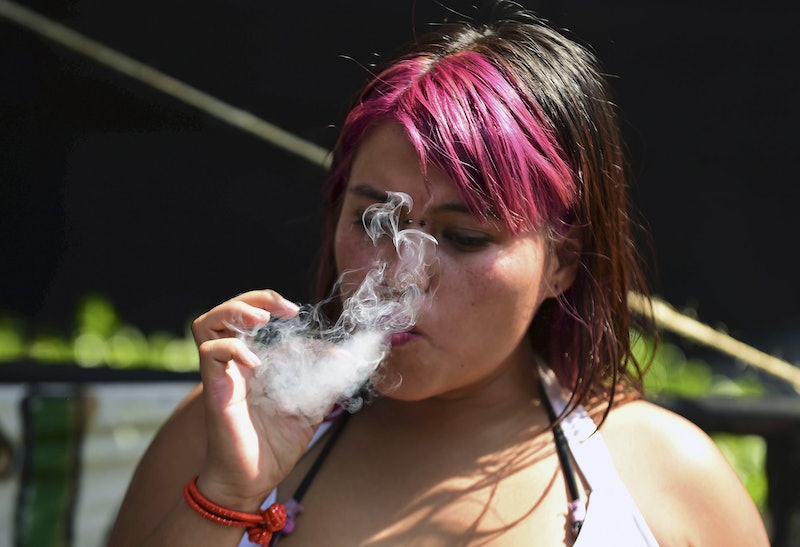 In the furor over Trump's election, a huge piece of news was largely neglected: eight more states legalized recreational or medicinal marijuana. It's good news for weed fans, though it remains to be seen whether Trump's White House will respect state laws about marijuana use. But at this particular moment in time, the U.S. is one of the friendliest nations in the world towards marijuana — and a new review of 60 marijuana studies that came out this week indicates that there might be something else positive in the new legal bonanza: despite fears that weed could be a "gateway" drug to heavier stuff, it seems that evidence suggests marijuana actually helps drug addicts wean themselves off more substantial and harmful substances.

What we know about weed is actually kind of confusing; science has done a lot of back-and-forth over marijuana's potential harms, its use, its impacts and other aspects, and has come to complex conclusions that require a lot more research to verify or disprove. The new wave of legalization will likely help scientists in those states propose new studies and do more work on a bigger proportion of the population; be ready to see an explosion of weed-related scientific results coming out in a few years.

But right now, this review of many of the previous studies done on cannabis and how humans seem to use it is one of the most comprehensive around — and it's telling us some very interesting things.

The new study itself wasn't based on new research. It was a roundup and systematic analysis of 60 different studies on marijuana in medical and non-medical contexts, and even then it pointed out that one of its main weaknesses was that these studies were small and specific; a lot more work is needed before we can make accurate, widespread decisions about weed in a medical context. But what the review discovered was fascinating.

The aspect on which the scientists chose to focus, at least in the media, was the fact that studies support the idea that people use marijuana to "exit" more problematic addictions. An "exit drug," in the parlance of doctors, is one that makes it easier for drug abusers to gradually get clean, by giving some of the same thrills or responses with a less addictive, less harmful substance. The best example currently known is methadone, a synthetic substance used to wean heroin addicts off their original substance without needing to go through the horrors of withdrawal. Unfortunately, long-term use of methadone isn't associated with great health benefits either, which is why "exit drugs" can sometimes prove to be more of a holding pattern.

This is surprising, since you've probably heard marijuana referred to as a gateway drug — a milder or less addictive substance that precedes or opens people up to using harder stuff. That's the logic: that you can "graduate" more easily from weed to crack, for instance, than from nothing whatsoever to hard drugs. The National Institute on Drug Abuse defines marijuana as a gateway drug, but the researchers on the new study aren't so sure.

According to the 60 studies under review, marijuana appears to interact with other drug use in a way more easily described as "exit" than "gateway". It seems that people are likely to use it as a substitute for other addictive substances, and that this behavior is pretty common, which opens up the possibility that it could be used in a more systematic way as part of drug treatment. "Research suggests," the lead scientist told the media, "that people may be using cannabis as an exit drug to reduce use of substances that are potentially more harmful, such as opioid pain medication."

The roundup shouldn't be surprising, though; if you've been paying attention to the studies on marijuana over the years, you'll know that its status as a "gateway drug" has been gradually chipped away by research. One widely shared study from British Columbia in 2012 found that, in a sample size of 404 different Canadian patients at dispensaries, over 75 percent said they substituted cannabis for at least one other substance, legal or not. But this overview of a huge chunk of the available science on cannabis and human use gives a lot more weight to the idea that this is an actual pattern of behavior, and that people who recommend using weed as a helpful substance in dealing with serious drug abuse might be onto something.

Researchers Also Found Weed Works Better For Some Disorders Than Others

The other aspect of the review that hasn't been getting as much press, but is just as interesting, is how weed was shown to interact with mental health across the studies. The reviewers found that there were certain areas in which marijuana use might be helpful, and others in which they wouldn't advise it.

The ones in which evidence pointed to weed as a good thing were interesting: PTSD was at the top of the list, while mood disorders like depression and social anxiety showed more mixed results overall. The researchers found substantial evidence that "the use of cannabis for therapeutic purposes may be problematic among individuals with psychotic disorders," but didn't see any link between weed use and self-harm or harming others. Psychotic disorders, in case you're wondering, include schizophrenia, bipolar disorder and, interestingly enough, some kinds of of drug use leading to psychotic episodes.

We've known about the potential worries around weed and psychotic disorders for a while; it seems that, according to previous studies, the effects can be so mixed and unpredictable that it's regarded as a poor idea. Healthline, in a roundup of studies on the issue earlier this year, found that science had shown weed could make it easier for somebody to slip into psychotic symptoms, might lower the age at which symptoms first occur, and might make the episodes worse. None of this seems like a particular plus.

In terms of PTSD, though, this confirms a movement that was already visible in studies; a 2009 study found that weed could help PTSD sufferers with treatment-resistant nightmares, while another in 2011 found that marijuana use seemed to be higher among people with PTSD who believed they had lower capacity to handle emotional stress. The future of cannabis as a PTSD therapy might still be a while off, and seems based on individual cases rather than a blanket bit of science; but this new review of studies might help clarify that, when people are traumatized, turning to marijuana might not be such a bad idea.

More like this
25 Quotes About Love To Share During Pride Month 2022
By Madeleine Aggeler and Emma Garza
An Honest Review Of The TikTok-Famous WalkingPad
By Kaitlyn Wylde
How To Protect Your Digital Privacy If You Need An Abortion Post Roe v. Wade
By Kaitlyn Wylde
5 Crystals To Lower Your Anxiety
By Megan McCarty
Get Even More From Bustle — Sign Up For The Newsletter