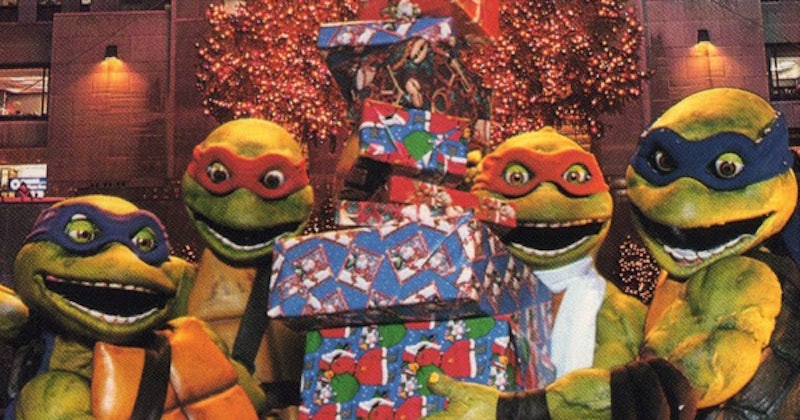 It's time to treat the men in your life, and whether they're your bestie, your boyfriend, your brother, or your neighbor, you can treat them to a '90s inspired gift for dudes. Of course, not all dudes (Note: calling them dudes not out of immaturity but because we're talking about the '90s, and when you're talking about the '90s that's the correct way to reference the masculine gender) will like the stuff on this list, but I'm betting that if they lived through the '90s they're going to love it. I was there. I remember what dudes liked in the '90s. So if there's a '90s dude in your life just waiting to be spoiled this holiday season, you've come to the right place.

From retro video games to throwing it back to the glory days of grunge and hip hop, there's tons to choose from when shopping for '90s dudes. You can even incorporate some modern chic so you don't go full Zack Morris on him and wind up with him in a Hypercolor t-shirt, slouch socks and neon colored pants. What I'm saying is, you can give the '90s, but with a little style. Here are twelve '90s inspired gifts for dudes, man.

1. The Rap Year Book, Because The '90s Really Were The Glory Days Of Hip Hop

I can tell you first hand that this book is great. Even if the dude you're buying for isn't that interested in the genre, anyone who is a fan of music generally will love this. It gets you up to speed on the history of rap, and given that the '90s were the best days of hip hop (according to me and probably someone else too), it's a great gift for the '90s dude in your life.

2. A Retro Sega To Inspire Him To Dig His Old Games Out Of The Boxes At His Parent's Place

Somewhere, there's a dude with a box full of Sega cartridges just waiting to be blown out and played again. Give him the means to do so. In the name of Sonic.

3. A Copy Of Nevermind, One Of Nirvana's Most Iconic Albums And Covers

You can buy these on tape still, but given no one has a cassette player anymore, and that record players are way cool right now, get it on vinyl. Even if he doesn't have a record player it doubles as a great piece of art for the '90s dudes home.

4. A Tommy Hilfiger Sweatshirt Because, Well, He's Going To Look Yum In It

There isn't a man alive, whether he's '90s or not, that wouldn't look yummy in this. And doesn't every dude deserve to be yummy?

5. And Of Course Some Calvins

Calvin Klein is the epitome of '90s sex appeal. Even if the dude you're buying for isn't your dude, imagine the girl or guy that's going to end up seeing them in these, and it will be a double gift that you're giving.

6. A Retro Throwback T-Shirt Of The Best Dinosaur Movie, And Best Movie Of The '90s, Jurassic Park

Jurassic Park is so good even Jurassic World can't kill its legacy. And this t-shirt is pretty cool regardless.

7. A Party On Pin From Wayne's World

If the dude is your bestie you should buy yourself one of these and you can tell each other to "Party on" the '90s way.

8. A Modern Indie Game In Some Rad '90s Packaging

The thing you're buying doesn't have to be '90s, especially if it looks this '90s. The packaging on some of the games on I Am 8 Bit's site is super '90s, while the games are modern must haves.

Because every straight guy loved Kelly, right? (And are you trying to sit there and tell me if someone got you this exact mug but with Zack Morris on it you wouldn't squeal?)

10. ... Which Doesn't Have To Be Heteronormative Either

We're here for all kinds of dudes, so maybe shirtless Jeff Goldblum is the '90s mug you're actually looking for...

11. A Fresh Pair Of Custom Made Socks

In West Philadelphia born and raised... There isn't a '90s child alive that can't finish that sentence.

This is a card game based on '90s video games, but it's new. And you get to be the boss monster for a change!

More like this
11 Trends From The ‘90s That Made You Feel So Cool
By Julie Sprankles
Remember These Ancient Pieces Of '90s Tech?
By Lucia Peters and Emma Carey
8 Creepy Things You Probably Did In The '90s
By Julie Sprankles
4 Most Outspoken Zodiac Signs
By Kristine Fellizar
Get Even More From Bustle — Sign Up For The Newsletter