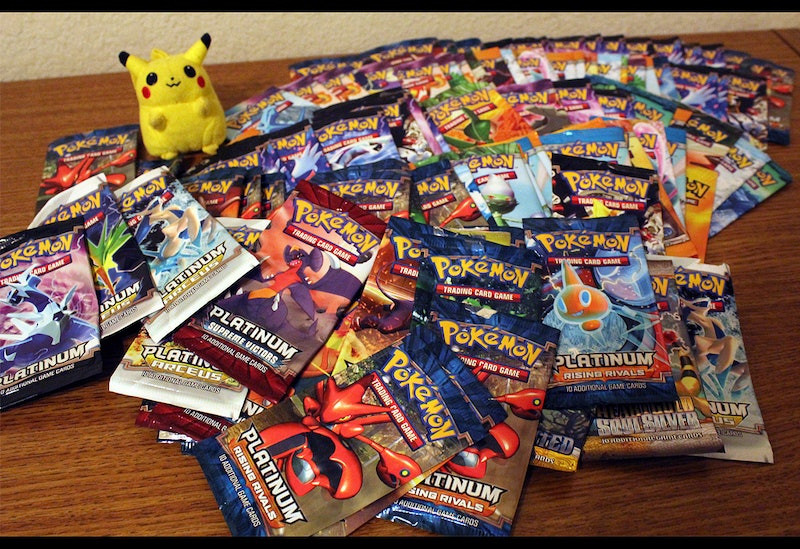 We all know by now that growing up in the '90s was one of the most magical times to come of age, and here's but one of the many reasons why — 'twas a decade filled to the gills with cool stuff. Accordingly, there were certain things every '90s kid couldn't wait to buy with their own money. Such was my sole motivation, in fact, for babysitting the little boy down the street whose constant demands to turn the ceiling fan on and off gave me biceps more ripped than, well, anyone my age. It was all worth it though when I could collect my paltry pay at the end of the week, head to Northwoods Mall, cruise my favorite stores for baby doll shirts to go with my inordinately hulking arm muscles.

It wasn't just the mall that made me starry eyed, of course. Like any good '90s kid, my budding consumerism was well-rounded. Sure, I had a special fondness for the mall and that ambrosial nectar known as the Orange Julius, but the mall wasn't the only purveyor of goods I dreamed of blowing my hard-earned babysitting money on. The things I couldn't wait to buy with my own cash could also be found in catalogs, toy stores, and even gas stations. And while some of these items are no longer in production, I'll always fondly remember the days when I thought I would cease to exist if I didn't get my hands on them.

1. The Entire Set of Milky Pens

I cared not if my penmanship was perfect in the '90s. As long as I had every single color of Milky Pen known to humankind, all was right with the world and my chickenscratch scribbling was the most beautiful thing to ever grace a Lisa Frank folder. Who cared if they were pastel, rendering nearly everything I wrote illegible? Everyone who was anyone had at least one. Since your 'rents thought you were insane for having that one — much less eight different colors — buying these babies shot to the top of '90s kids' "things to blow my allowance on" list.

Looking back now, perhaps Mom really did know what she was talking about when she tried to tell me Sun-In couldn't possibly be good for my hair. Every summer, I would all but dunk my head in this hair lightening formula, dreaming of getting perfectly Drew Barrymore-esque blonde streaks. What I ended up with, naturally, was brassy orange hair that crunched — and hair should never crunch. Alas, such is the price of over-hyped hair beauty, no? Don't pretend like you didn't spritz this on your spikey hair too, '90s dudes.

Oh, how I wanted a Talkboy. Thanks to Kevin McCallister's clever use of one in 1992's Home Alone 2: Lost in New York, every '90s kid wanted one of these glorified recorders. Interestingly, they weren't even originally a real thing. When '90s kids started virtually lining up around the block at toy store's to plunk down their lawn-mowing money for one, Hasbro create one. They became so popular, though, that Hasbro had to pull their holiday ads due to supply shortages.

What could possibly be cooler than growing crystals in your own room? I mean, c'mon. Who wouldn't want to be part of the geological process? Or, more importantly, who wouldn't want to show off a bunch of sparkly rocks when their friends visited? I tried to convince my parents to plunk down the money to purchase this kit by Edu-Toys, but perhaps the safety warnings on the containers put them off the idea. Regardless, I vowed to save up enough babysitting cash to buy it myself.

If we'd left our musical selections in the '90s up to our parents, we may all have ended up with the best of Michael Bolton. As it were, '90s kids had an abundance of amazing music to choose from, ranging from grunge to pop. The trick was just in saving up enough money so that, when your parents dropped you off at the mall, you could make a beeline for Sam Goody and pick out the music of your '90s loving heart.

In the '90s, brands were a big deal to kids. Judging by the number of companies represented in my middle school halls, you would think we all had endorsement deals or something. Alas, while I attended a prestigious private school, I did not come from the same kind of money as many of my peers. This made scoring all the every single person on the planet seemingly already had far more problematic for me. For my sweet, hardworking mom's part, she never stopped insisting the "off-brand" version was just as good — and I never stopped saving for the real thing. We certainly were materialstic little things back then, weren't we?

Forget about the Benjamins! In the '90s, Pogs and Pokemon cards were the currency. At first, parents indulged this phase, thinking, "What a harmless hobby for my child to have." It was only after they caught you bartering your lunchbox for a Shadow Lugia did they realize it may be an addiction in the making. So, understandably, you had to fend for yourself in the competitive world of token trading. You couldn't wait to get your allowance or that crinkled wad of dollar bills for walking your neighbor's dog just so you could spend every last penny on the pogs or Pokemon. So, basically, the way we feel about wine today.

No trip to the mall would be complete without a trip to Claire's where — in addition to stocking up on chokers, yin-yang earrings and temporary peace signs tattoos — you hovered over the piercing counter, picking out precisely which studs you were going to get. Although my grandmother took me to get my lobes pierced at the tender age of six, I couldn't wait to make it back to the Claire's chair and spend my own money on that coveted piercing my mother wouldn't approve of: my underage upper ear cartilage. In full disclosure, it hurt like hell and, after blowing a month's allowance on it, I ended up having to take it out before it even healed because of sports. Still, I have no regrets.