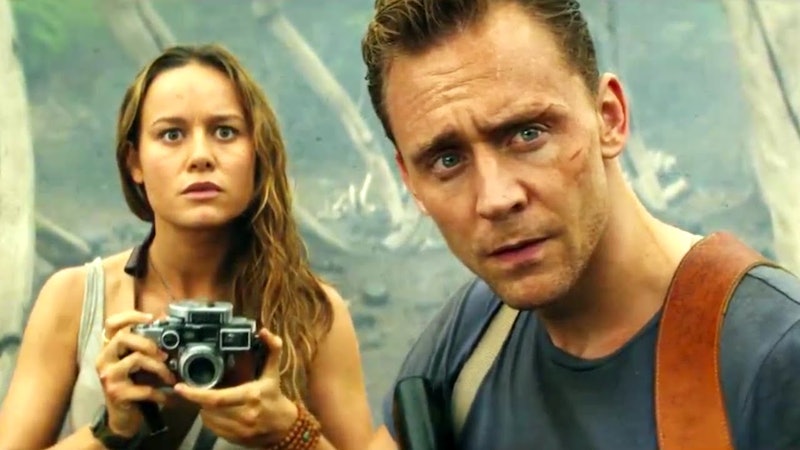 "We're gonna need a bigger helicopter." Maybe nobody says these actual words in the new Kong: Skull Island trailer, but the two-and-a-half minute teaser for the upcoming creature feature is undeniably suffused with a Spielbergian sense of wonder, terror, and awesome scale. Doing for tropical islands what Jaws did for the ocean, Skull Island drops a boatload of famous faces — including seemingly half of the Marvel Cinematic Universe with Loki (Tom Hiddleston), Captain Marvel (Brie Larson), Nick Fury (Samuel L. Jackson), and Nova Corpsman Rhomann Dey (John C. Reilly) all onboard — into the wilds of the titular archipelago, where they will be forced to fend off all sorts of oversized monsters. But is Skull Island a King Kong sequel, prequel, reboot, or remake?

The last time the giant ape appeared on the big screen was in Peter Jackson's 2005 adventure King Kong , starring Naomi Watts, Adrien Brody, and Jack Black. It will have been over 11 years since that film's release by the time Skull Island premieres in March 2017 — but that's not an unheard-of amount of time to pass between installments of a franchise. (Heck, 2015's Mad Max: Fury Road picked up where Beyond Thunderdome left off 30 years earlier.) But there's one problem with the idea of Skull Island being a sequel to King Kong: the fact that the titular monster died at the end of Jackson's film, felled from the top of the Empire State Building.

Could Skull Island be a prequel to that story, in which another ill-fated group of explorers encountered the beast and met a grisly end before the events of Jackson's film? Not likely, unless time travel is involved; while the 2005 film took place in the 1930s, the new version is set several decades later, in the 1970s. So, does Skull Island have anything in common with Jackson's version of the story? It may seem odd, considering how critically acclaimed and commercially successful King Kong was — winning three Oscars that year for its impressive technical achievements — but Skull Island will ignore the events of Jackson's reboot entirely, existing as the start of a new Kong series.

The only question that remains, then, is if Skull Island is itself a remake of a previous Kong film, or whether it's a brand-new reboot of the franchise. Including Jackson's take, there have been seven King Kong feature films preceding Skull Island, starting with the 1933 original (featuring a stop-motion Kong and iconic scream queen Fay Wray), and including the 1976 remake (featuring a climactic battle atop the World Trade Center instead of the Empire State Building and Jessica Lange in the first movie of her career).

However, Skull Island isn't a remake of any of these films — not Son of Kong or King Kong Escapes or even King Kong Lives. It is an original take on the classic story that is meant to serve as the foundation of a new shared universe between the massive ape and another iconic giant monster: Godzilla. Skull Island will take place in the same cinematic universe as the 2014 reboot Godzilla; after its release next March, there will be a Godzilla sequel due out in 2019, followed by the franchise's climactic mash-up in 2020: Godzilla vs. Kong.

Legendary, the studio behind the recent Godzilla and Kong reboots, announced these plans in October 2015, and teased that the franchise will eventually include "other famous creatures" like "King Ghidorah, Mothra, and Rodan." Of course, all of these plans are likely banking on the financial success of Skull Island. It's fortunate, then, that the studio has assembled such an impressive cast, and that the new trailer is so promising, featuring an array of pulse-pounding action, eye-popping creature design… and comedic relief, courtesy of Reilly.

You'll be able to see Loki and Captain Marvel team up against King Kong when Skull Island hits theaters on March 10, 2017.