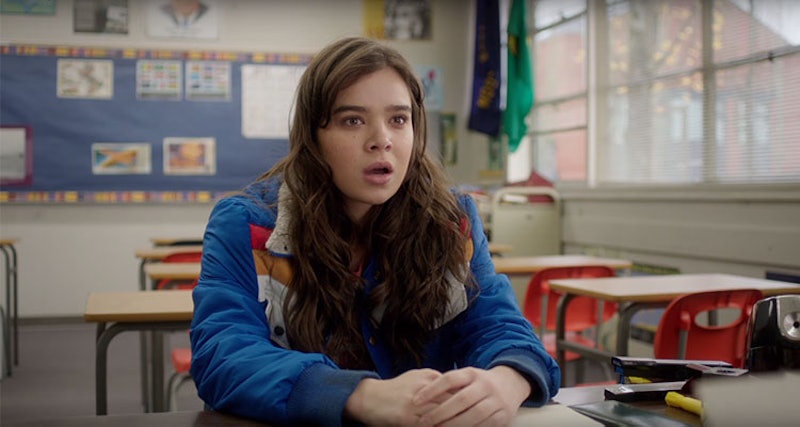 Over the last few decades, the term "teen movie" has taken on a not-so-flattering connotation. Long gone are the days of John Hughes dialogue and Molly Ringwald heroines — the teen films of today tend to either be broad, sex-driven comedies or too-quirky-for-their-own-good romances. It's been frustrating to see how many of these movies have fallen flat, when the coming-of-age genre is so ripe for heartfelt stories and compelling protagonists. Yet in the last few years, a handful of films have come out that've defied cliches to be true "teen movie" gems: The Perks of Being A Wallflower, The Spectacular Now, and, now, The Edge of Seventeen , a new dramedy that feels like the teen coming-of-age story audiences have been waiting to get for years.

Out Nov. 18, The Edge of Seventeen follows Nadine (Hailee Steinfeld), a high school junior whose world is upended when her older brother starts dating her best friend. Nadine is an angry, sarcastic teen, the kind of girl who enjoys getting a rise out of her teachers and making fun of her classmates' "fake" attitudes. She's smart and witty, capable of hilarious one-liners and biting monologues alike, but she's no teen movie cliche. Nadine isn't "quirky," just angry; she's bitter and lonely, her years-old grief over her father's sudden death having morphed into pure hatred for the world. The audience may see past her facade, but for Nadine, the comfort she gets from telling herself that she's smarter and better than everyone around her is all she can feel.

The movie's brilliance, though, comes in not letting her get away with it. Nadine's angst is not seen as cute or endearing, but as a flaw she needs to work on in order to be a better person. Her anger drives away her brother and friend, both of whom can't understand why Nadine won't get over her unease with their relationship and let them be happy. Nadine knows, deep down, that she's being unfair, but she's too immersed in the image she's created for herself — that of a girl so wise and so jaded that she doesn't need anyone but herself — to do anything to change.

Eventually, a series of bad decisions leads Nadine to wonder if she's gone too far in isolating herself from the world. She's lost everyone: her best friend, the only person whose company she genuinely enjoys; her brother, the sole person who understands her grief; and even her mother, whose own heartbreak she takes cruel advantage of. Nadine knows that her attitude and actions have caused this pain, and it's clear that there's a real loneliness and remorse underneath her rolled eyes. But to apologize and change would mean confronting the fact that she's not the jaded, too-cool-for-everyone person she's made herself out to be, and Nadine isn't sure if she's ready for that to happen.

So many teen movies only touch the surface of teen angst; they get the anger and resentment shared by kids who feel like outsiders in their communities, but they don't get the self-hatred that so often lies beneath. The Edge of Seventeen , though, shows it all. It understands, perhaps better than any other coming-of-age tale this decade, that teenagers are as layered and flawed as adults. Adolescence can be a brutal time when it comes to identity, and for so many teens, the person they think they are is entirely different than the person they show the world. Nadine is a mess of contradictions, but that's what makes her human.

The Edge of Seventeen is a great movie for many reasons, from its often-hilarious dialogue to its moving performances (Woody Harrelson and Kyra Sedgwick are particular standouts). But it's how the film handles its leading lady, a girl as complicated and imperfect as all the best on-screen antiheroes, that makes it the true teen classic it's undoubtedly going to become.