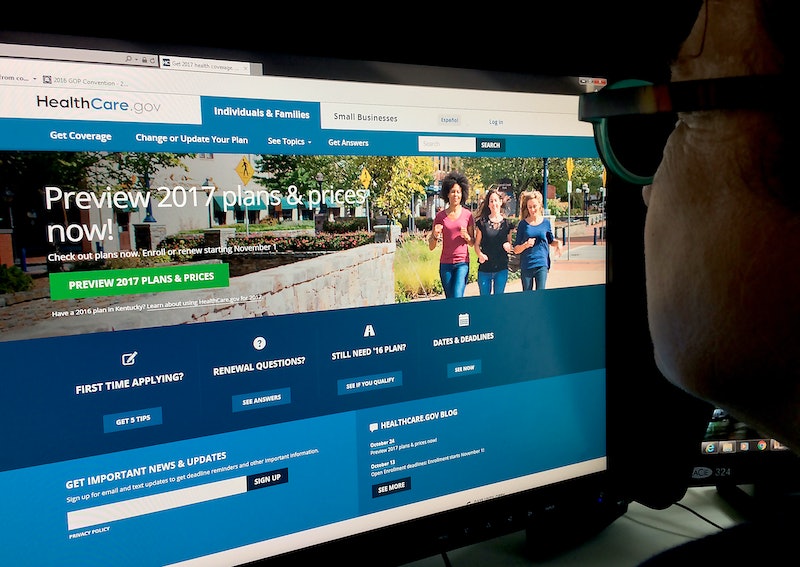 For six years, perhaps the most consistent policy argument from Republicans was ending Obamacare. The House voted to repeal the Affordable Care Act dozens of time, bumping each time against President Obama's veto. But now, with Donald Trump as president and Republican control of Congress, they appear to be preparing to fulfill their promise.

But despite having been working on such a proposal since 2010, it's not clear that they are indeed prepared to implement it. They have made it clear that they don't like the Democrats' way of providing health insurance to those who lacked it before, but they have yet to provide a unified plan for how they would do it. With over 20 million people currently insured through aspects of the program, they have to figure out a better plan.

To the Republicans' credit, they have come up with a plan to repeal Obamacare. They've come up with seven plans, in fact. However, they haven't yet come up with an agreement on which they will follow through on. Moreover, the president-elect appears, at least at times, to waffle on how much he will change Obamacare. Although his campaign website vowed to "repeal and replace" Obamacare, Trump told CBS' 60 Minutes that he wants to try to make sure people with preexisting conditions will be covered, a key aspect of Obamacare, "because it happens to be one of the strongest assets."

There are three important issues that Republicans have to deal with if they want to change healthcare.

1. Cutting Off Millions From Insurance Is Politically Nonviable

Once people start receiving help from the government that keeps them from dying, it will undoubtedly become unpopular to take that away. Because this is healthcare we're talking about, there is no option of turning off the system and turning it back on — even a single day on which people lack health insurance comes with people dying as a result. If Republicans plan to cut off health insurance without finding a way to provide it to those who can't afford it, they should expect children relying on Obamacare subsidies for cancer treatments to appear crying on live television.

The GOP will have to find a way to keep insurance coverage for at the very least, most of the people covered by Obamacare.

One of the most popular parts of the law is the provision requiring coverage for people with preexisting conditions, which had 82 percent support, according to a 2012 poll by Reuters/Ipsos. As mentioned above, Trump himself said he wants to keep it:

Holding on to this aspect of Obamacare is easier said than done. Covering preexisting conditions could allow healthy people to stay off insurance until they get sick — and buy it only when they do. Since the entire calculus on health insurance depends on spreading the risk around, this would bankrupt the healthcare industry — sick people who receive expensive care would cost the system, while healthy people who have insurance as last-resort protection would likely leave. This would cause problems, because...

3. Republicans Have Promised To Lower Costs

In the final weeks of the 2016 election, Republicans attacked Obamacare over rising premiums, making healthcare more expensive for many. If they get rid of the mandatory health insurance requirement, which Democrats used to spread risk around and lower costs, while keeping preexisting conditions, there will probably be even bigger cost increases.

It was easy for Republicans to attack Obamacare by pointing out how it wasn't ideal. But by promising that people will still be covered, and will pay less, they'll be responsible if people lose coverage or prices go up — just like Obama was.

More like this
Michigan’s Governor Is “Going To Fight Like Hell” To Protect Abortion Access
By Andrea Zelinski
How To Fight For Reproductive Rights, Based On How Much Time You Have
By Courtney Young
LGBT+ Men Fleeing Afghanistan Were Denied Asylum By The Home Office, New Findings Show
By Sam Ramsden
The 8 Best Professional Manicure Tools, According To A Nail Technician
By Mackenzie Edwards and Danielle Calma
Get Even More From Bustle — Sign Up For The Newsletter