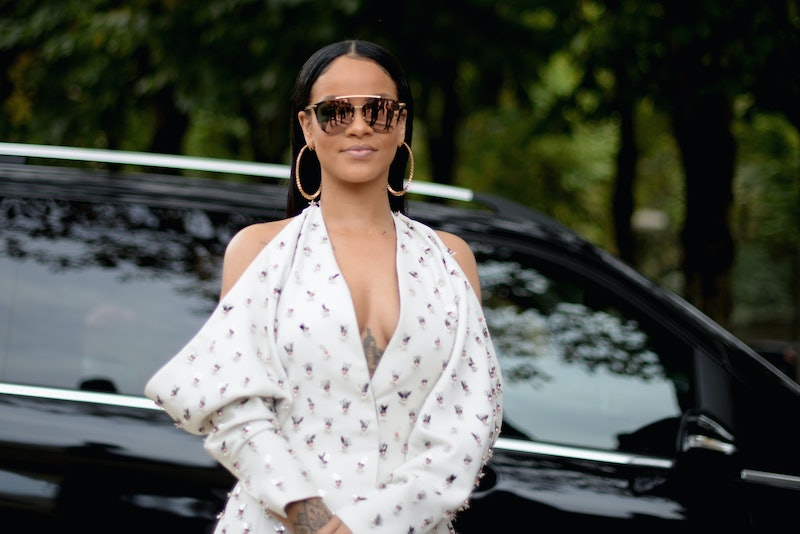 I wake up most mornings and I'm like, "What would Rihanna do?" when I think about how I'm going to execute the day ahead. Though, you know, I don't typically follow through on all of the badass things she probably does by 10 a.m. Whatever. It's the thought that counts, right? The fact of the matter is, Rihanna is a boss and a busy one at that. So, it's kind of uncertain whether she has the time to do certain things. Like, for instance, is Rihanna going to be at the American Music Awards? Or, will she be off creating music that I'll listen to on loop for three weeks straight? (Bustle reached out to Rihanna's rep regarding her possible attendance, but did not receive a response at the time of publication.)

Let's put it this way: If Rihanna wants to accept some pretty prestigious awards that she has a pretty good shot at, she'll be there. Rihanna has seven nominations. According Entertainment Tonight, the singer has been nominated for Artist of the Year, Collaboration of the Year ft. Drake, Video of the Year, Favorite Female Artist — Pop/Rock, Female Artist — Soul/R&B, Favorite Song — Soul/R&B, and Favorite Album — Soul/R&B. If that isn't incentive to get her fabulous self there, I am not too sure what is. I mean, who doesn't like being showered in adoration and praise. Please, if there's anyone out there who opposes this kind of attention, do stand up. I implore you.

The thing is, though, she isn't exactly obligated to be there. Accepting awards is great and all, but it's a voluntary thing. With that in mind, she has not been listed as a presenter. In fact, she hasn't been listed as a performer, either, which would pretty much guarantee her attendance. But, E! News does report that she will "likely" be there. So, that's something, right? Right.

Based on her nominations along though, I think there's a good chance Rihanna will be at the AMAs, so you can be cautiously optimistic about seeing her on your screen and in her sure-to-be flawless red carpet outfit. Though, I wouldn't expect another VMAs-like moment between her and Drake. *Sigh*

More like this
Rihanna Is A Mom Now After Giving Birth To Her First Baby With A$AP Rocky
By Ananya Panchal and Jake Viswanath
Rihanna Wore A Sparkling Lingerie Look For Date Night With A$AP Rocky
By Allie Fasanella
Spice Girls’ Net Worth: The Richest Member Is Wealthier Than The Rest Combined
By Hugh McIntyre
Stormi Just Walked A Red Carpet With Mommy Kylie Jenner & Daddy Travis Scott
By Hugh McIntyre
Get Even More From Bustle — Sign Up For The Newsletter