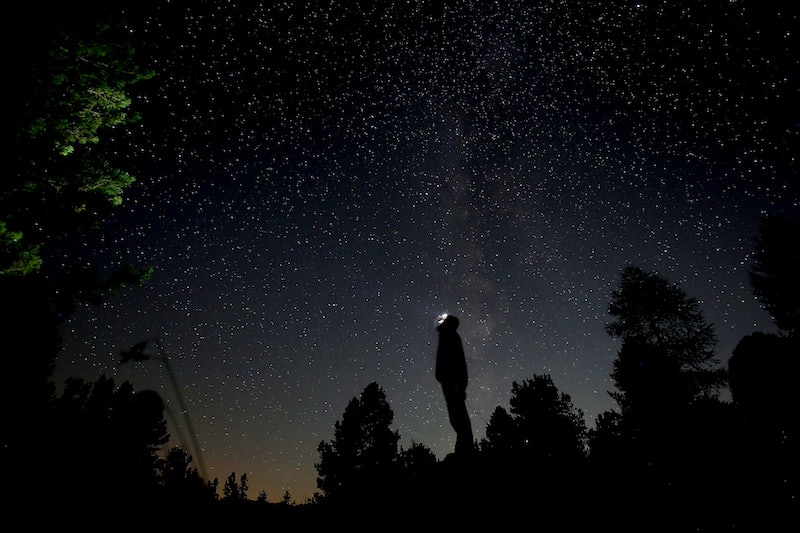 Humans have been staring into the vast expanse of nothingness known as space since the dawn of humankind. Attempting to do everything from predicting fate to navigating during a journey by the stars is an age-old practice — and today, it's no surprise that the internet is awash with plenty of meteor shower superstitions. And right now, the sky has plenty in store to entertain and enthrall us: The Leonid meteor shower peaks tonight, while the Geminid meteor shower will be arriving next month. And the internet? Well that's always there to spook you out with a seemingly unending set of stories and conspiracy theories.

According to Space.com, thousands of years ago, any objects in the night sky were easily linked with gods and religion. But for some reason, misunderstandings about meteors lasted longer than they did about other celestial objects. So what is a meteor shower, anyway? They occur when particles from asteroids or comets enter Earth's atmosphere at a super high speed. As Space.com puts it, "When they hit the atmosphere, meteors rub against air particles and create friction, heating the meteors. The heat vaporizes most meteors, creating what we call shooting stars." In the case of the Leonid shower, we'll be treated to this sky-show because of Earth crossing the orbital path of a comet called Tempel-Tuttle. This comet will be sprinkling its with bits of debris that will be visible to us they streak across our sky at a rate of around 10 to 15 meteors per hour.

If you want to check out these so-called shooting stars (even though they're not actually stars), make sure you're looking up tonight. To get you ready for it, here are four of the weirdest meteor superstitions and conspiracy theories around:

MYTH: Meteors Were Caused By Witches

In 1807, the Weston meteorite shower rained down on Connecticut following a fireball — and it seriously spooked people out. Logical scientific theory was rejected, with many people linking the shower to witchcraft instead. Wrote Washington Irving at the time, "The people at large show a keenness, a cleverness and a profundity of wisdom that savors strongly of witchcraft".

MYTH: The Tungaska Meteor Event Was Caused By The Government

You probably haven't heard of it, but the Tungaska event of 1908 is one of the world's weirdest meteor events. It caused a huge explosion that flattened 800 square miles of forrest in Siberia, causing strong vibrations which reverberated all over Russia and leaving the skies of Europe and Asia illuminated by a mysterious glow for days afterwards. Scientists now agree Tungaska is linked to a meteor, but back then, several other seriously spooky theories held. Some put it down to UFOs; others believed it was the state's doing. The event was largely ignored in Russian media due to the remote location where the explosion happened, but many believed the government was behind the mystery. Some also believed inventor and engineer Nikola Telsa was responsible, thanks to his experiments with wireless transmission.

MYTH: Meteors Were Sent By Gods And Angels

Space.com reports that long ago, meteorites were perceived to be gifts from angels; sometimes, though, people believed meteor showers were sent from gods when they were angry. Writes Robert Roy Britt, "As late as the 17th century, many believed [meteors] fell from thunderstorms (they were nicknamed 'thunderstones'). Many scientists were skeptical that stones could fall from the clouds or the heavens, and often they simply didn't believe the accounts of people who claimed to have seen such things."

MYTH: The 2013 Russian Meteorite Was Actually A Weapons Test

Again with Russia, guys. In 2013, a meteor that exploded over the city of Chelyabinsk spawned a selection of wacky theories, the scariest of which was centered around socio-political thinking on weapons testing. As Popular Science reports, the state-owned paper Russia Today attributed the large explosion (the meteor which glowed 30 times brighter than the sun and caused retinal burns) to a Russian missile. Other theories hold that meteorite itself was evidence of a new weapon being tested.