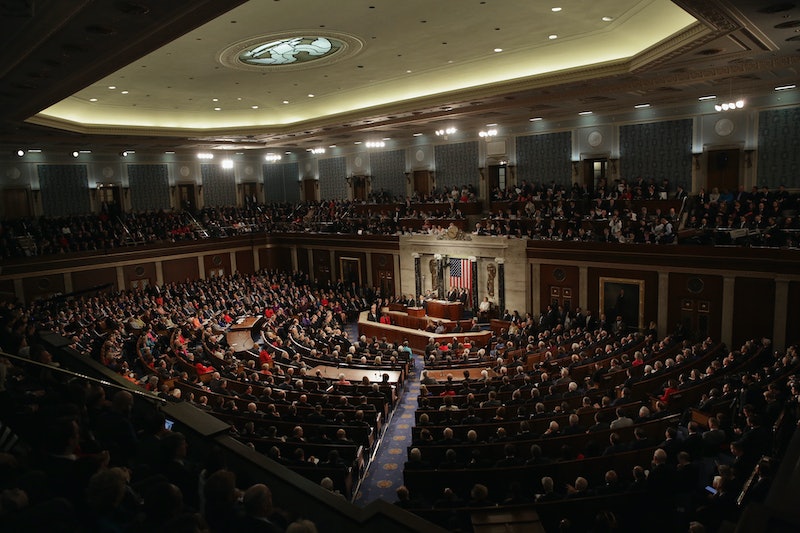 Throughout the general election, President-elect Donald Trump campaigned on promises to buckle down on immigration reform. He's vowed to build a wall, deport undocumented immigrants, and suspend immigration from "terror-prone" regions, among other things. If you're concerned about Trump's immigration policy proposals, there's someone you can talk to — your congressional representative. While the idea of speaking with a member of Congress might sound daunting, it's important to make sure your voice is being heard as we move toward a new White House administration. Moreover, it's a lot easier than you might imagine to call your congressional representative with your concerns about Trump's immigration policies.

While immigration was a key focus of Trump's campaign, the president-elect hasn't always been consistent in his stance. For example, Trump went from calling for a ban of all Muslims coming into the United States to vowing to suspend immigration from "terror-prone regions." Recently, he stepped back from his initial vow to deport all undocumented immigrants, telling 60 Minutes he would focus first on deporting or incarcerating "probably 2 million, it could be even 3 million" that are known gang members, drug dealers or have criminal records. (Interestingly, the Department of Homeland Security estimates there are only 820,000 undocumented immigrants with criminal convictions.) But while Trump has tweaked a few of his immigration policy proposals over the last year, he remains ardently anti-immigration.

Trump will take office Jan. 20 and has laid out a blueprint for his first 100 days that includes instituting a number of immigration policies. Within his first 100 days, Trump has vowed to strip the United States' 32 sanctuary cities of federal funding, revoke President Barack Obama's executive action creating Deferred Action for Childhood Arrivals (DACA), remove "more than 2 million criminal illegal immigrants," cancel visas to recalcitrant countries, suspend immigration from regions with "a proven history of terrorism," and push legislation through Congress that would fund a wall along the southern border.

So if you're ready to make your voice heard post-election, there are a few things it might help to keep in mind when talking about Trump's immigration policies with your congressional representative.

Finding contact info for your rep should be fairly easy as it should be located on their official website. If you're not sure who your congressional representative even is, you can look them up with your zip code here. It always helps to do a bit of research before picking up the phone, so while you're pulling up a phone number off your representative's official website, take a few moments to familiarize yourself with where they stand on the issue of immigration. Have they voiced support for any of Trump's policy proposals? Have they sponsored or co-sponsored any bills regarding immigration reform, border security, or refugees? What, if anything, have they said about the DREAM Act?

According to Emily Ellsworth, a state-office staffer for Reps. Jason Chaffetz and Chris Stewart, certain methods of communication are better at snagging the attention of your congressional representative than others. For example, don't rely on social media to make your voice heard. While your best friend may keep on top of all your Twitter mentions, the representative serving your congressional district in the House of Representatives probably doesn't.

If you really want to get on your rep's radar, don't write, call. In tweeting her tips for reaching out to congressional leaders, Ellsworth said emails and letters arrive by the hundreds and are often sorted and responded to with topic-centered form letters. So while your message will be tracked and noted, there's a good chance it won't be shared individually with your representative.

Picking up the phone and dialing your representative's district office (that's the office or offices they run in your state as opposed to the office they run in the District of Columbia) is reportedly one of the best ways of speaking directly to a member of your representative's office staff about your position on Trump's immigration policies. When on the phone, communicate that you're a constituent. State why you're calling and elaborate on your thoughts and concerns regarding Trump's immigration policies. If immigration is a personal issue for you, share why. Talk about how immigration issues affect you and your family. Don't be afraid to get personal. Former New Mexico Congresswoman Heather Wilson tweeted that constituents' personal stories were an effective way to gain her attention when she was in office.

While calling a member of Congress can be intimidating, it can be an important and effective way of getting your voice heard in government. So do a bit of research, jot down a few notes, take a deep breath, and pick up the phone.