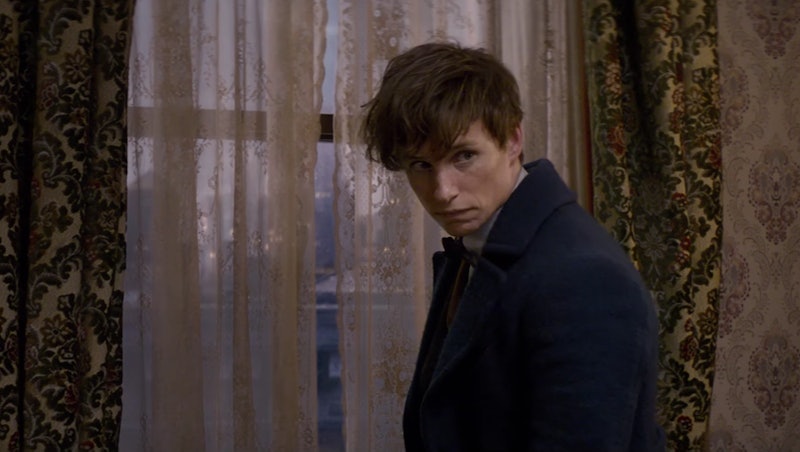 When Newt recovers all of his lost magical creatures in Fantastic Beasts and Where to Find Them, you'd think most of his problems would be solved. Unfortunately, amidst his journey to collect his magical creatures in New York City, Newt has also landed smack dab in the middle of a complicated magical attack and a plot to inflame Wizard and No-Maj relations. Spoiler alert. All that comes to a head in during the film's climax, when it is revealed that Graves, the auror trying to control the obscurus and bring wizards out of the shadows, is actually Grindelwald in disguise. And, when he is revealed, he has a curious message for Newt, but because he mumbles, it's unclear what Grindelwald says to Newt at the end of Fantastic Beasts . Update: According to the screenplay, which was released on Friday, the actual line is "Will we die, just a little?"

Earlier: After Newt apprehends Graves and uses a spell to unmask him as Grindelwald, the entire MACUSA (Magical Congress of the USA) is stunned. Grindelwald, the wizard causing destruction across Europe and advocating for wizards to dominate over Muggles/No-Majs, has been under their noses this entire time. Grindelwald is promptly arrested, though we know from Harry Potter that he eventually escapes custody and gains even more ground in Europe before his eventual defeat by Dumbledore in 1945. But, before he is taken away by MACUSA, Grindelwald says something to Newt. Now, to be completely honest, Grindelwald's message to Newt Scamander was somewhat mumbled and difficult to decipher. So, what did Grindelwald say to Newt in the end of Fantastic Beasts and what does it mean?

The first option is also the most plausible message Grindelwald could have given Newt: "You can't hold me forever." Considering he spoke just as he was being taken to MACUSA's magical prison (assuming they have one), it's arguably the most sensible thing he could have said. It's also a somewhat prophetic statement, considering the fact that Grindelwald does not, in fact, stay in official MACUSA custody. We know, thanks to Harry Potter, that Grindelwald will escape MACUSA prison and continue to terrorize Europe until Dumbledore defeats him in 1945. So, they do not, in fact, hold him forever.

This sounds a bit like Grindelwald throwing in the towel, which doesn't really correspond to his evil wizard attitude we've heard of. But, maybe Grindelwald wasn't speaking about himself, but about Credence, who appeared to have died moments before. "We all die anyway," could be Grindelwald's way of comforting Newt, who, like him, was trying to keep Credence alive.

It is my belief that Grindelwald mumbled "We all die just a little" to Newt as he was carted off by MACUSA officials. It sounds poetic, but It could just be a threat. Newt is the reason Grindelwald failed in collecting the obscurus, which he wanted to use as a weapon to reveal the Wizarding World to No-Majs, and Newt ends up capturing him using the Swooping Evil (one of his many magical creatures). Perhaps Grindelwald's message is a promise of revenge, or a death threat.

Lucky for fans unable to make out the mumbling in the movie, J.K. Rowling is releasing the official script on Friday, Nov. 18, so fans can know once and for all what Grindelwald says to Newt at the end of Fantastic Beasts and Where to Find Them. Until then, fans will just have to rest assured that, whatever Grindelwald said, it was probably menacing and creepy.