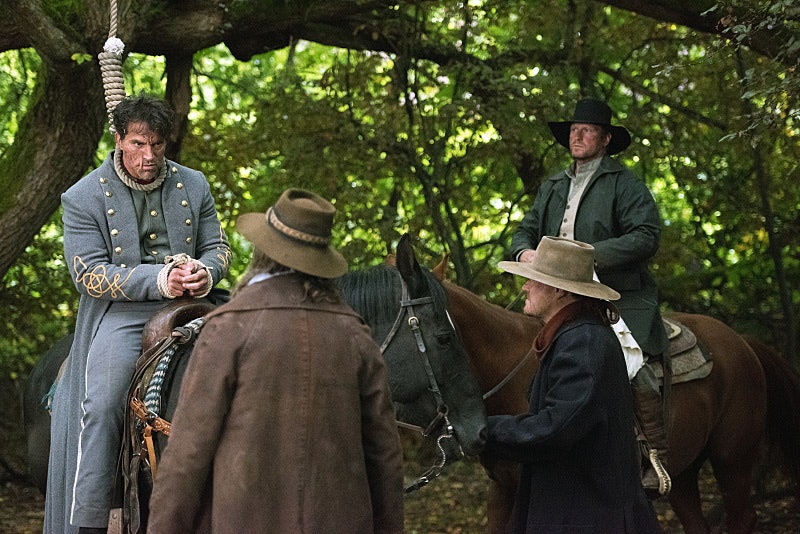 The powers that be at The CW must know about our Westworld obsession, because the Legends of Tomorrow team is headed back to the Old West. Just in time, as it turns out. According to this exclusive clip, Jonah Hex is back on Legends of Tomorrow and teaming up with the heroes once more.

Hex previously appeared in the Season 1 episode "The Magnificent Eight," as well as in one of Barry Allen's speed force travels on The Flash. He is a friend and ally to Rip Hunter, and got the team out of a scrape. This time, it appears that they are returning the favor. Are they there just to save his life, or are they recruiting him? Taking down this speedster villain is going to take all the help they can get.

According to the official CW description of Thursday's episode "Outlaws," it's just a regular aberration that sends them to this particular time period. Work as usual. "When the Legends arrive they find their old friend Jonah Hex in trouble with his arch-nemesis, Quentin Turnbull. The team soon discovers that they need to stop Turnbull and his gang from conquering the West and branding it his own lawless territory." Turnbull will be played by Jeff Fahey, who you might remember from Lost. Here's the clip, that shows Hex in a sticky situation.

Not your typical Western, that's for sure. However, this is pretty standard for the Legends team by now. They've grown a lot since they last encountered Hex, as that scene demonstrates. Should be interesting to see how they fare in familiar territory, for a change!