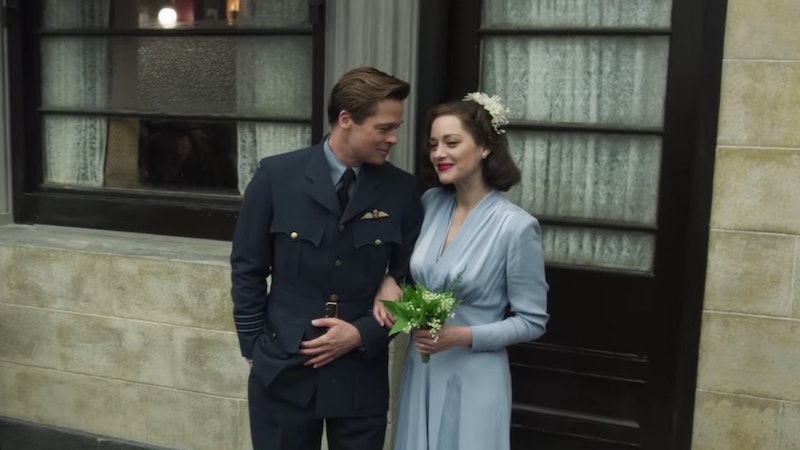 With Allied, Brad Pitt is back in another espionage movie, and this time he's facing some new (but perhaps familiar) challenges. In the movie, many of the characters speak French, including Pitt's costar Marion Cotillard who, of course, is a native of France. But the highly American Pitt also delivers an impressive amount of French dialogue in the film. But does Brad Pitt really speaks French, or did he just memorize his lines for Allied and nothing more?

Well, he's certainly no stranger to the language. Though Pitt's marriage to Angelina Jolie is now at its end, the two were together for over a decade and Jolie is well-known for having a fondness for the French language, as she mentioned in an interview with Buro 247 in early 2016 about her film By the Sea. "I love the French language, so it was a pleasure to be able to work in it as a director," Jolie said.

It seems that Pitt has been working on learning French for years. In a 2011 conversation with Parade Magazine about his family life, Pitt referenced his "Rosetta Stone for French sitting right on the table in the bedroom," which he was using to try to keep up with the French skills of his children. Jolie spoke both French and English to them — "we have that second language infused in our home," Pitt said — and he was working to learn the language as successfully as the rest of his family. "Even the twins as babies were saying certain things in French,” Pitt said.

Yet, despite his efforts, Pitt still seems to be in the learning stages with French, rather than totally fluent. In the 2016 interview with Jolie about By the Sea, the actor noted that Pitt "wanted to learn French himself," so she added scenes to the film to allow him to practice. And Pitt, despite taking to another language, German, so well that he was nominated by German language publication Deutsche Sprachwelt as a "Keeper of the German Language," recognized in the 2011 Parade interview that he struggled mightily when the language in question was French. "I know there are certain synapses in my brain that just freeze dead at French," he said.

But Allied proves that this hasn't stopped him from continuing to work on the language. Speaking with the Toronto Sun , costar Cotillard recalled how she gave tips to Pitt, who "worked very, very hard" on his French parts for the film. Allied was an extra challenge, because not only was Pitt expected to speak French, he also had to navigate a Quebec accent (his character is from Canada) and try to mask it with a Parisian one. In the interview, Cotillard gave credit to Pitt — his voice is never dubbed in Allied — and also noted that "he was very stressed out" about giving a convincing performance in French.

So, while Pitt may not be fluent in French by a long shot, that hasn't stopped him from giving it his all, and you have to respect the man for always being willing to learn. Bien fait, Brad.