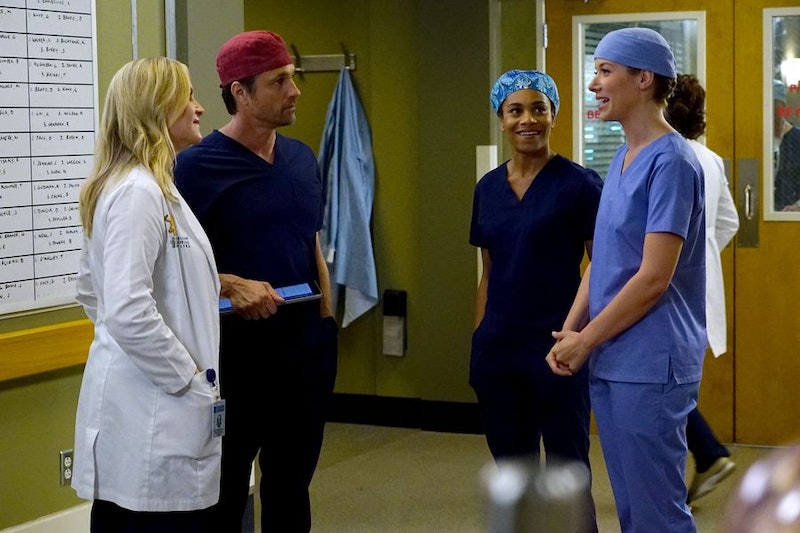 Can you believe that Grey's Anatomy is in the middle of its thirteenth season? It feels like just yesterday that I was in high school and my friends and I were watching with horror as Meredith Grey stuck her arm in a body cavity and slept with George O'Malley (not at the same time). The show has sure had its ups and downs, but it has once again found its footing. With the fall finale upon us, when is the spring premiere of Grey's Anatomy ?

Shonda Rhimes has never shied away from drama, and this season has had plenty of it in its first half. Alex Karev beat the crap out of intern Deluca at the end of Season 12 because he thought Deluca was attacking Jo, and Karev's storyline has mostly dealt with the criminal, personal, and career consequences of his actions. And don't worry—Deluca's beautiful face is OK. Meredith is just fine two seasons after Derek's death; Amelia and Owen are married, but probably not for long because she admitted she doesn't want kids; Bailey is Chief; and April and Jackson are co-parenting their baby girl and, I think, growing closer by the minute.

Though many series are keeping fans in the dark about when they'll return, we already know exactly when all of these storylines will pick back up. ABC already announced that Grey's Anatomy Season 13 will return on Jan. 19, 2017 in its usual 8 p.m. time slot. Now, I'm looking to the future because there are a lot of questions I hope get resolved in the second half of the season.

Will April & Jackson Work Things Out?

They may be divorced, but these two are living under the same roof and parenting their child together. Jackson is helping April date, but you can tell that he's still in love with her. I really think the reason they split was because they both couldn't handle the death of their first child, Samuel, and who could blame them? Now that they have a happy, healthy Harriet, I want to see these two reunite.

Richard Webber has been on Grey's Anatomy since day one. He's in charge of educating all of the doctors in the hospital, and lately, Catherine Avery (who happens to be Weber's wife, which is a whole lot of complicated) has been under the impression he's doing a poor job. She and Bailey have called in a consultant who wants it to be her way or the highway. This leaves Webber out in the cold, and I can't imagine he'll be happy about it. He's old enough to retire, so are these the last days of Webber at Grey Sloan?

That's what you get, folks, for making whoopee — you get married really fast, and in the hazy honeymoon period decide you should have kids together. It's all fine and dandy until someone changes their mind. All Owen wants in this world is a child, and he already couldn't have one with Cristina. They need to figure out if they're still on the same page and where to go from here.

Will Meredith & Riggs Hook Up Again?

Meredith put the kibosh on her relationship with Riggs as soon as she found out that Maggie liked him. If Meredith had only been honest with Maggie, she could have at least tried to live happily whatever after with Nate. Is it too late for these two?

While I'm not expecting all of the answers from Grey's Anatomy anytime soon, I would love for a few of these to be resolved shortly after the show returns on Jan. 19, 2017.