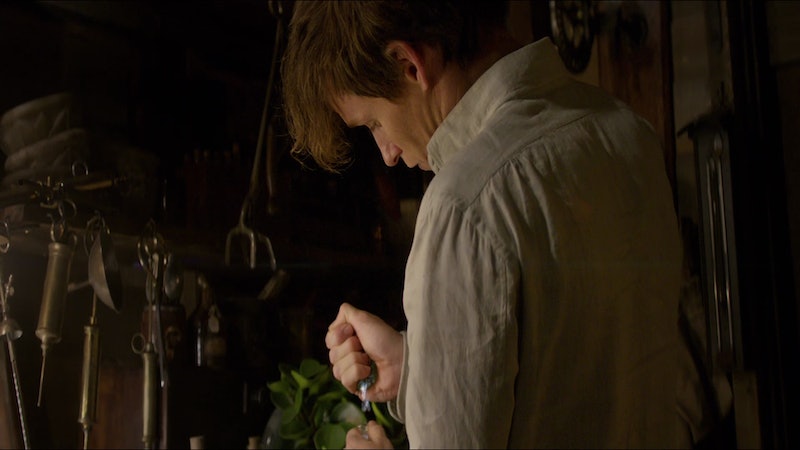 The newest Harry Potter film has little to do with the Boy Who Lived, but since it does take place in J.K. Rowling's magical universe, there are plenty of familiar elements. There is also loads of new magic, and one of those new bits is particularly creepy. What is the Death Potion in Fantastic Beasts and Where To Find Them ? There are spoilers ahead for Fantastic Beasts, so apparate away if you don't want to know more.

This isn't just poison that kills you instantly. The Death Potion in Fantastic Beasts is more complex and magical than that. When the potion is administered, its victim is forced to relive some of their happiest moments in life. That causes them to sort of happily submit to death. Whether you find that humane or terrifying is up to you. It's like the inverse of a Dementor's Kiss, which keeps you alive but sucks out your soul while you relive your most traumatic moments, in a way. It's also, much like the Dementors at Azkaban, used as a form of punishment/sentence by the MACUSA.

What's interesting is that this isn't how we're used to seeing death in the Harry Potter universe. We know about the Killing Curse, Avada Kedavra. Other characters have died directly by way of a basilisk, breaking the Unbreakable Vow, and muggle methods like stabbing and strangulation. One of the most mysterious deaths is that of Sirius Black, who simple fell through a veil to (presumably) the Underworld in the Department of Mysteries. However, most murders are done by way of the old "AK" spell. Potion-wise, the closest thing to this in the known Harry Potter canon is the Draught Of The Living Death. However, that's technically a sleeping potion, like one you might find in a fairy tale. Realistically, it puts you in a coma.

This concoction in Fantastic Beasts is quite different. So, where does this death potion come from? First of all, I'm going to take a wild guess and say that brewing this potion is illegal, like the Unforgivable Curses. Even the Polyjuice potion was buried in the Restricted Section of the Hogwarts library, and that is quite common in England. If the recipe were readily available, it seems like that would be a very easy way to kill people.

Perhaps it was discovered in America, and kept as a government secret. I do like the idea that some potions or spells are more popular in some countries than they are in others. Maybe the Killing Curse is just more in fashion on the other side of the pond. That said, don't you think Snape would have had a bottle or two on hand if hew knew about this? Still, I like that Fantastic Beasts allows fans to keep discovering and exploring the Wizarding World — even if it does include disturbing new magical ways to die.