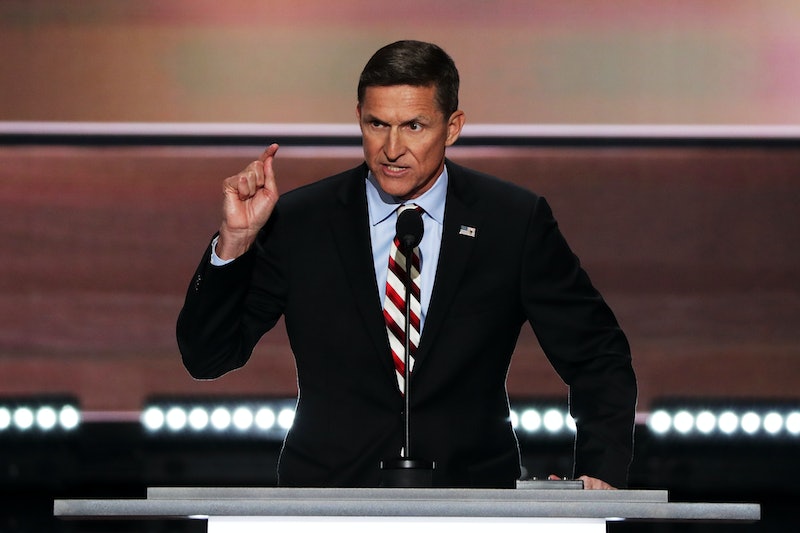 NBC reported Thursday that retired Air Force Lt. Gen. Michael Flynn will be Donald Trump’s national security adviser. Flynn was a staunch supporter of Trump during the campaign, and at one point was rumored to be on Trump’s vice presidential shortlist. It is not a surprise to see him land a top cabinet post, and yet Flynn’s conduct, both during the campaign and earlier, doesn’t exactly inspire confidence in his ability to serve in this position, or in any position.

Most worrisome is the fact that Flynn apparently got tricked by a fake news article during the presidential campaign. The story came courtesy of a site called TruePundit.com, and it alleged that emails found on Anthony Weiner's laptop included "evidence linking Clinton herself and her associates" to money laundering, perjury and unspecified sex crimes against children. As CNN's Jake Tapper reports, the piece was an outright fabrication with no basis in fact. But Flynn seemingly didn’t bother digging deeper, and tweeted the hoax news to his 60,000 followers, alongside the comment "U DECIDE." As of this writing, he still hasn’t deleted the tweet.

Although many people got taken by fraudulent “news” stories during this campaign, Flynn isn’t just anybody, and his gullibility here should disqualify him from consideration for any government post. It’s one thing for a government official to receive conflicting intelligence reports; it’s quite another thing entirely for them to spread a hoax that takes maybe 10 seconds to debunk.

Flynn previously served in the Pentagon as director of the Defense Intelligence Agency, but left the agency a year earlier than intended under disputed circumstances. Flynn claims he was fired because he refused to use the term “radical jihadis”; his former colleagues say that it was his “chaotic” management style and inability to gel with other high-ranking officials that got him the boot.

Although he’s registered as a Democrat, Flynn is a fierce critic of President Obama, and spoke in support of Trump at the Republican National Convention. Unfortunately, due to poor scheduling, he spoke at the end of the night, immediately after Melania Trump, at which point most of the convention hall had already cleared out.

It’s troubling to learn that Trump is putting his faith in Flynn, a man who relies on sources like like TruePundit.com for his news. Does he deserve a fair shake once he assumes the job? Of course. But more importantly, America deserves a national security adviser who doesn’t get fooled by hoax news articles.